Part One can be found here.

I just realized I forgot to mention that my awesome friend Greg, of Stop The Wave fame, took us to In-N-Out Tuesday night. It was very much appreciated (by us and the radio folks we brought to go bags back for) because without someone else driving us to places besides the hotels, we had no mode of transportation besides calling a cab.

So, Wednesday. This involved waking up to Gio Gonzalez rumors and a vague presser with the Marlins that just turned out to be the announcement of the Jose Reyes signing. Afterwards the press spoke to Ozzie Guillen, and I snuck into the media room again: 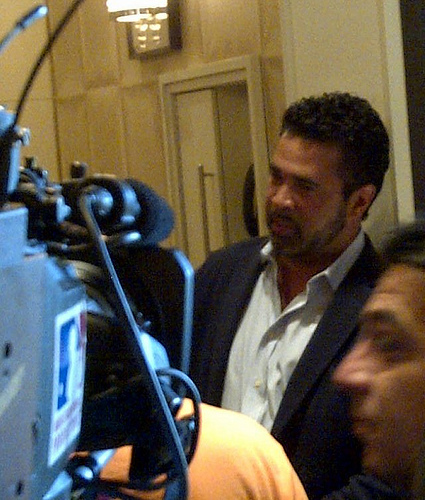 The first word I could understand as I made my way into that crowd was "F&*%ING!", unsurprisingly.

The rest of the day was spent doing some people watching and rumor-listening on my own, for the most part. Most everyone I knew was busy so I tried to just take everything in. I hit the bar a little earlier than usual that evening and had a great time just talking to the people near me - one of which was another woman drinking whiskey neat, which does not happen often. Once she left I wound up next to the owners of the Savannah Sand Gnats, the A-ball affiliate of the Mets. I just so happen to think they have the best team name in baseball and I own one of their shirts, which the guys found amusing.

Wednesday night I joined a group of 12 or so writers for dinner at Lockhart Smokehouse. It was beyond amusing to show everyone how it's done as far as eating Texas BBQ, and that was a great place to do it at. Highly recommended, and we had a lot of fun. Jonah Keri didn't even kill us on the drive over there or back, and we didn't get lost!

I have to say, the writers that are around in the baseball world right now are a group of really awesome people, especially the bloggers. I could've shown up to the Meetings this week, clueless as I was, and I might've been blown off. As far as MLB and the BBWAA are concerned, I am a nobody and any shred of legitimacy or cred I have is in relation to this site and its stellar reputation. Instead of just accepting the fact that I was hanging around, pretty much every person I met (whether I knew them from the Internet previously or not) was super nice and engaging. Several put forth extra effort to include me in all respects, and I really appreciate that. Other than the Tigers making some sort of exciting blockbuster move, I don't think this week could have gone any better and hopefully I didn't make an ass out of myself too often.

Thanks for reading! Hopefully I'll be back with actual credentials sometime in the future.