I guess since I called my old spring training posts "Allikazoo's Spring Training Insanity," it's only appropriate to do the same for my trip to the Winter Meetings this year. It's a fitting title.

So, yes, I went, since I'm only a quick 48 minute flight away. Try as I might, I couldn't get anyone to approve actual media credentials for me. But over the past couple years, Twitter has told me that doesn't matter because everything interesting happens in the lobby and other areas (read: bars) that anyone can get to. Twitter was mostly right.

I'm not sure how many people pay attention to nationwide weather, or how many of you read all the tweets complaining about the weather in Dallas this week. In case you are unaware: It. Was. Miserable. Like, wind chill of about 25 most days. That doesn't usually happen down here until February. Unless you are actually with MLB or super important, it was impossible to get a room at the actual hotel they held the meetings at, the Hilton Anatole. Luckily even though the area around it is nothing exciting, there were tons of other hotels within walking distance. Still, I thought long and hard about it every time I considered walking through the parking lot and across the street because it was brutal.

Anyway, I arrived Sunday evening. My host for the week, Craig Calcaterra of Hardball Talk (who thought it would be funny for me to show up and crash the Meetings just for the hell of it, bless him), greeted me and we headed over to the Anatole to see what was going on. We were presented with a crowd about twice the size of this: 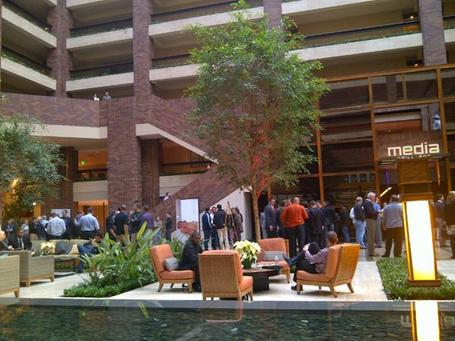 This is the area just past the lobby; the ceiling is about a million stories high. After 7:30pm it gets so packed you're bumping into people and saying "excuse me" 50 times to try to get to the bar and back to wherever you've planted yourself, and you never know who you'll be bumping into. The first amusing sighting I had was Joe Maddon, mingling amongst the writers with his glass of red wine. Every time I turned around I saw someone from ESPN, FOX, or some sort of manager or exec. It's a bit overwhelming at first, and so is the big crowd in general. It's basically those people, writers/bloggers, plus some college kid job seekers there for the PBEO job fair.

Monday morning I tagged along to the Sports Mangement Worldwide Baseball Career Conference. I only hung out for one of the panels, but I'm betting it was a good place to be for anyone looking to work in baseball. Really interesting lineup and good questions asked. I spent the rest of the day mostly recovering from the previous evening, and then a bunch of local friends of mine who are into baseball came by to hang out and see what was going on. At some point on a couple occasions, Billy Beane could be seen/heard hooting and hollering in the bar.

Tuesday morning was a quick meeting/press conference/thing that the BBWAA held. I was not there, though a bunch of people I know were. If you're a regular on BYB and SB Nation itself, you know that there was some outrage when they informed SBN that their most famous writers, Rob Neyer and Amy K. Nelson (so basically SBN itself), would not be given accreditation. Since they both already hold membership from previously working elsewhere it doesn't really affect them now, it was still stupid and kind of made no sense. Not to take anything away from the fact that the BBWAA accepted Fangraphs, of course. Very glad for them. I kind of consider myself a bit of an outsider, I feel funny calling myself a WRITER, but the whole thing just really bothered me.

Moving on from that little mini-tirade (sorry), after I heard what happened and got over to the Anatole I decided to see what kind of trouble I could get myself into. I wish there was a way to link to a cluster of my tweets, because I wandered around the hotel taking photos/making fun of everything I could think of. I guess the easiest way to read if you missed it would be to go here and just scroll through the pics, clicking the left arrow button to go in order. Here's one that didn't make it on there, mostly because I'm not really sure who it is: 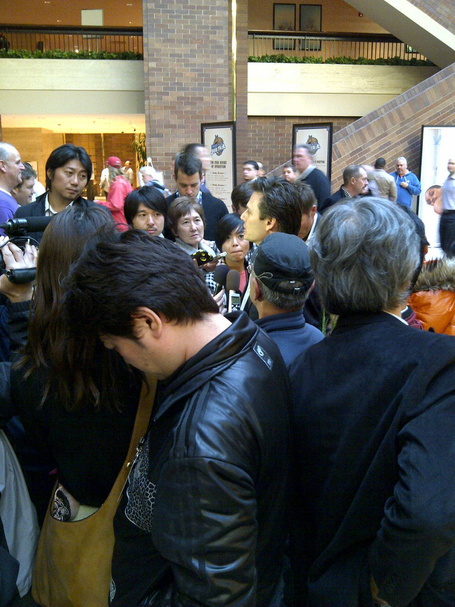 This is basically what would happen when any GM or Important Person arrived at the hotel. Good times. Other highlights of Tuesday: going into the media room (this would continue over the rest of the week) even though they try to keep non-media out before you even go down the hallway that leads to it, and seeing Jim Leyland go into the hotel gift shop and, I swear, walk out without paying for a candy bar.