So our WAR Grids got interrupted last week. It just gave you more time to ponder why I can't figure out why a decade should begin on the 0, right? Well, tough.

Presented for your viewing pleasure, the top Tigers players of the 1980s: 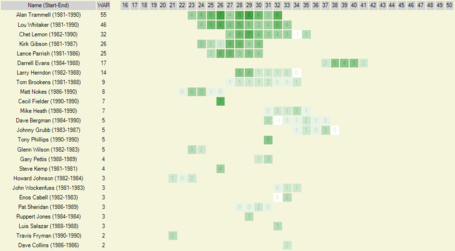 Remember to click the grid to enlarge it. And remember you can make your own at Fangraphs.com.

For many people, the 80s were probably the best decade to be Tigers fans. And with good reason. The club totally dominated the decade. They were fun to watch, they won their division, they won the World Series. For younger generations, the icons were not from the 60s, they were from this group. So you've got Alan Trammell, Lou Whitaker, Chet Lemon and Kirk Gibson well represented. Of course, we have to remember these WAR Grids Fangraphs makes are just for position players, otherwise I'm sure you'd see Jack Morris and a few other pitchers rank pretty well too.

So who's your favorite from the 80s?