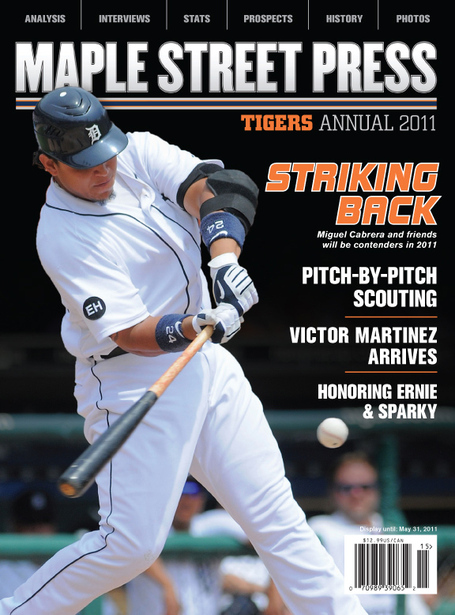 Our fine production artists at Maple Street Press have finished their work on the MSP Tigers Annual 2011's cover, so I thought today might be a nice time to give you a look at that as well as explain a bit from the table of contents.

Hopefully you've made your pre-order, but if you haven't please do! It should also hit your local bookshelves statewide in Michigan on March 1.

This is really a great publication that I enjoyed writing and editing with a fine group of writers. I know you'll enjoy it! Remember, unlike other spring publications, this one has 128 pages focused entirely on the Tigers by people who know the team best. Professional full color photos are on nearly every page. Best of all? No ads cluttering things up. This is truly 128 pages focused entirely on the Tigers.

With a Latin flavor, Tigers are back on track and contenders in 2011 says Kurt Mensching of Bless You Boys.

In-depth profiles of every player on the staff, including what zones batters love to see the ball thrown into, what pitches the hurlers throw for the most success and a whole lot more.

Motor City Bengals' lead writer John Parent looks at the key themes for each of the AL Central teams.

Parent also listed five Tigers players to keep an eye on, as well as one bonus theme that might help decide the division

Former BYB editor, current contributor to SB Nation Detroit and Big League Stew, Ian Casselberry gives us an in-depth look at some of the new Tigers.

Count On Cabrera
by Mike Rogers

Sometimes BYB author Mike Rogers gives us a look at Cabrera's battles on and off the field, and just how well his 2010 season compared historically.

Off And Running
by Lee Panas

Detroit Tiger Tales' Lee Panas looks closer at Austin Jackson's incredible 2010 season and what we might expect in 2011.

Getting Social
by Bill Ferris

Bill Ferris, now of TigsTown, looks at how some Tigers players, staff and media members use social media.
Sidebar: Tweeters you simply must follow. Ferris communicated with Scot Drucker, Casper Wells, Robbie Weinhardt, Jason Beck and more for the article.

I look back at some mistakes that were made after 2006 that set the Tigers back and nearly knocked the Restore the Roar campaign off its tracks. What can we learn from those mistakes and did Dombrowski learn his lessons?

The Ace Within
by Matt Snyder

22-year-old Rick Porcello made his MLB debut before he could legally drink alcohol. In 2010, he suffered a sophomore slump and was sent to Triple-A to work on things. Will he ever become the ace many imagine he can be? Matt Snyder of Motor City Bengals tells us and compares Porcello's start to some other young aces.

One of my favorite stories in the Annual, and sure to be one of yours: Tigers second baseman Will Rhymes shares what it's like to suddenly go from being in the bus leagues to the major leagues, as well as some of his favorite memories from the 2010 season.

No Relief
by Ian Casselberry

Casselberry profiles lefthander Phil Coke, who will be joining the rotation this season.

Laurila gets Coke's reaction to doubters, as well as asks him if he is a "typical lefty" and gets a surprising response.

Down on the Farm

Filling In The Gaps
by Matt Wallace

BYB's Matt Wallace surveys the Tigers' farm by position and names his most important player by position.

The Next Big Thing
by Matt Wallace

Wallace talks to top prospect Jacob Turner about his meteoric rise through the organization in his first professional year.

Upon Closer Inspection
by Alex Eisenberg

Eisenberg of Baseball Intellect explores Turner's mechanics and tells us just how good Turner can be. (Hint: Ace.)

Rogers inspects another top pitcher, Andy Oliver, who disappointed in his Tigers debut until you consider that 2010 was his first year of professional baseball.

Bubbling Up
by David Tokarz

All the authors of BYB put their heads together to rank the top 20 prospects.

The Voice Of Detroit
by Tom Gage

The Detroit News' Tom Gage talks to some of the people who knew longtime announcer Ernie Harwell best and shares their stories.

Casselberry dives into the history of one of the team's most popular and successful managers of all time.

The Legend Of Big Rudy
by Lee Panas

Do you know who Rudy York is? You should. Lee Panas sheds more light on the slugger from the 1930s and '40s.

A Summer To Remember
by Mike McClary

DailyFungo's Mike McClary takes us back to the 1961 season, one of the best in the team's 110-year history yet one in which it didn't make the playoffs.

BYB's Allison Hagen reminds us that Cabrera may be a superstar, but he's really just a big kid who is happy to spend time with his fans.