Tigers bullpen: When do they deploy relievers and how do they do?

Share All sharing options for: Tigers bullpen: When do they deploy relievers and how do they do?

At the end of last April, I took a look at Jim Leyland's bullpen usage in a somewhat unconventional way. I used leverage index -- found at Fangraphs -- to see where and when he was inserting his top relievers. Overall, however, I wasn't a big fan of the graphI used (which was the Tigers version of a graph made by Jeff Zimmerman over at Royals Review).

An idea popped into my head and after putting it down on pape ... er, into Excel, I think I've improved on my post from last year.

What I've done is taken each reliever's Expected Fielding Independent Pitching (xFIP) and plotted that against each pitchers total batters faced this year. Then, creating a bubble graph, I used each players average leverage index when he enters the game (called gmLI on Fangraphs) to dictate the size of the bubble.

Before we present this years data, let's make a test run on the 2010 season first. Data and graph after the jump. 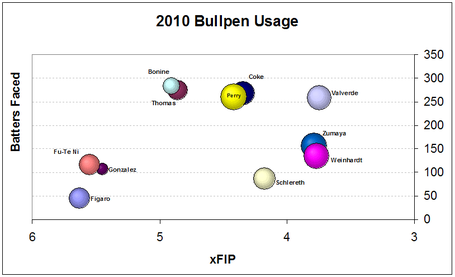 You can click the image to enlarge. The way to interpret this graph is batters faced is on the vertical axis and the pitchers xFIP is on the horizontal axis. The size of the bubble is indicative of a higher leverage index when the pitcher enters the game -- and this is full-season data. Ideally, as you go further right along the horizontal, you go further up along the vertical and the circles get bigger.

Here, Jose Valverde was the best reliever in the 2010 season for Detroit. He, Phil Coke, and Ryan Perry had all had similar tough situations to come into. But, because of Valverde's better strikeout numbers and nearly equal walk numbers, he was the best pitcher of the three.

Now, let's apply to how Jim Leyland's deploying his bullpen in 2011: 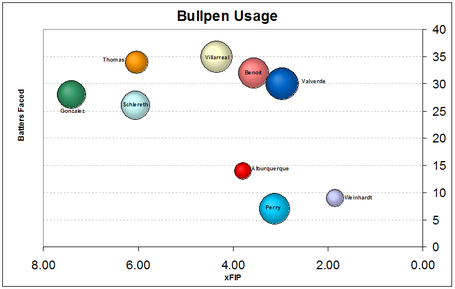 There's a clear divide in terms of the number of batters faced. Double Al (Al Alburquerque), Ryan Perry and Robbie Weinhardt all have under 15 batters faced. As such, their results aren't too stable -- though Ryan Perry will surely face more batters now that he's over his eye infection.

Once again, Valverde has been very good -- striking out eight of the 30 batters he's faced while walking just two -- but what surprises me the most is how big Brayan Villarreal's bubble is. In fact, only Valverde has come into more high-pressure spots than Villarreal -- that's largely a product of the ninth inning being more pressure packed than the sixth or seventh, where Villarreal's been getting work. However, Valverde usually gets clean innings to work with while Villarreal's getting appearances with men on base, which make it all the more impressive. Now, he hasn't quite performed as well as Joaquin Benoit -- I'd like to see Benoit deployed more in the situations Villarreal's been getting instead of strictly waiting for the seventh with the lead or whatever 8th inning comes along -- but he's been beyond serviceable thus far.

To the left side of the graph, Enrique Gonzalez, Daniel Schlereth and Brad Thomas have struggled in medium-leverage situations, though Thomas' are more platoon-related where he's matched up against a tough left-handed hitter.

Overall, I think this is a relatively simple way to get a nice thumb sketch of how good each pitcher is in the bullpen, the sample size -- snuck in a Mensching Pet Peeve! Yes! -- of batters the pitcher has faced, and a decent gauge on how crucial the situations have been in which they were deployed.