On Friday night, Justin Verlander notched his 1,000th strikeout in a Detroit Tigers uniform while pitching the Tigers to a comfortable 9-3 shellacking of the, ahem, rival White Sox (cram it, HawK!)

In doing so, Verlander became just the 15th Tigers pitcher to rack up 1000 or more K's while wearing the Old English D -- a number that, admittedly seemed low when I first heard it. Magnificent Mickey Lolich leads the list by 699 K's over second place Jack Morris. Peep the table:

There are some of the best names in the Tigers long, storied history that appear on this list -- perhaps two of the biggest leading the way. Denny McLain, John Hiller, and Joe Coleman appear from more recent history, and others like Hal Newhouser and George Mullin also pepper the list.

One thing that's interesting to me, is the amount of batters faced it took Verlander to reach the milestone. Verlander faced 4624 hitters in his career which was the fewest among the hallowed 15 pitchers:

BF is the number of batters faced. As you can see, the always underrated John Hiller faced the second fewest amount of hitters in the 1000 K club, yet he still needed almost another 600 batters than Verlander did. As a result, if we look at the list in terms of strikeout percentage -- the number of total batters a pitcher punched out -- Verlander shines again.

Verlander is the only one that clears the 20% strikeout percentage mark -- okay, okay, Hiller makes it, too, once you round up. Now, this is partially helped by the era that he's playing in. Hitters are willing to trade strikeouts for hard contact which drives up pitchers strikeout numbers, but I think we can all safely say that on a pure stuff basis, Justin Verlander's pitching repertoire holds up against anyone in the game today and most definitely in the Tigers modest pitching history.

Now, moving on to the actual at-bat, it's every bit as impressive if you watch the video of it, but I'd like to take a different take on it. We're going to walk through each of the five pitches he used to dust off White Sox catcher AJ Pierzynski through the lens of PITCHf/x. As a quick-and-dirty primer on the PITCHf/x system is that in each ballpark there are three cameras that record the ball around the 45-50 foot mark from home plate. It then identifies the pitch and records a ton of data on the way to home plate.

I've grabbed the data from Justin Verlander's start from Brooks Baseball and now we'll take a look at the flight path of each pitch he threw to Pierzynski.

Verlander had gone through 6.2 innings on Friday when the left-handed hitting Pierzynski stepped into the batters box. Justin started AJ off with a 97 MPH heater on the inner half above the belt buckle. 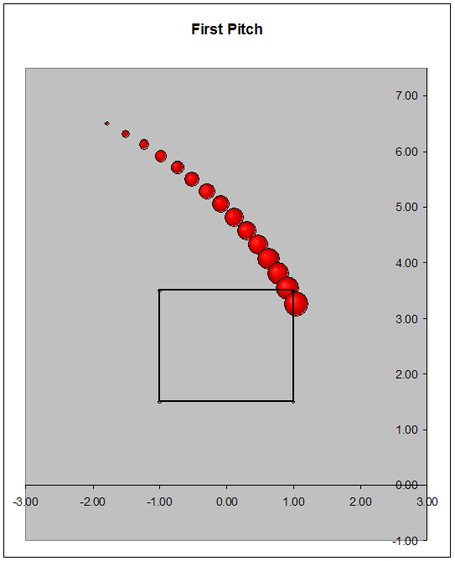 Now, to read this graph, you must imagine that you are Alex Avila -- men, wouldn't we be so lucky to grow a full beard over the course of a nine inning game?! -- and this is your view of all the pitches Verlander threw. You can see JV's heater hitting the top of what is the inside corner to AJ Pierzynski. The result of this wound up being ball 1, as Verlander appeared to be possibly squeezed.

After busting him inside with that, Verlander went to the change-up. 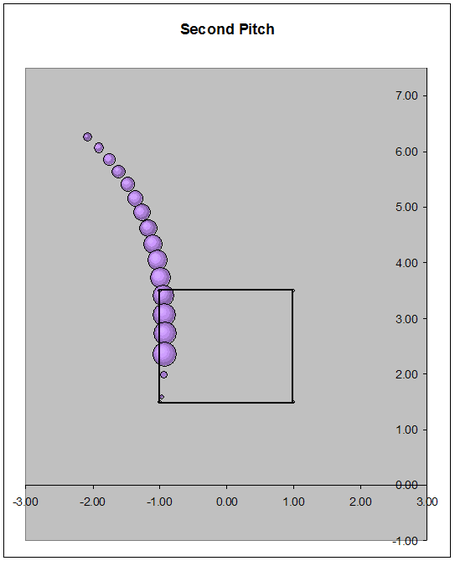 Filthy. This change-piece came in at about 86 MPH with good tail and still caught the strikezone. If you're not fooled by the 11 MPH difference between the two pitches, you still better put the bat on the ball or risk taking a called strike two. AJ elected to swing and flailed through the pitch. A nice bit of foreshadowing on what was to come.

Verlander elected to not go back to the heater and wanted to drop the hammer on Pierzynski. 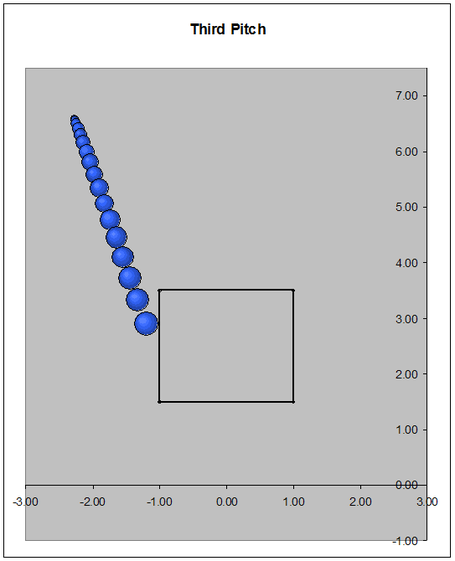 Verlander dropped this 80 MPH hook on the outside corner that Pierzynski just watched as home plate umpire Fieldin Culbreth dubbed a strike. Cubreth giveth (ball one on the first pitch) to Pierzynski and taketh away on the third pitch.

Verlander elected to snap off another breaker to Pierzynski, again on the outer half, to try to polish off the plate appearance. 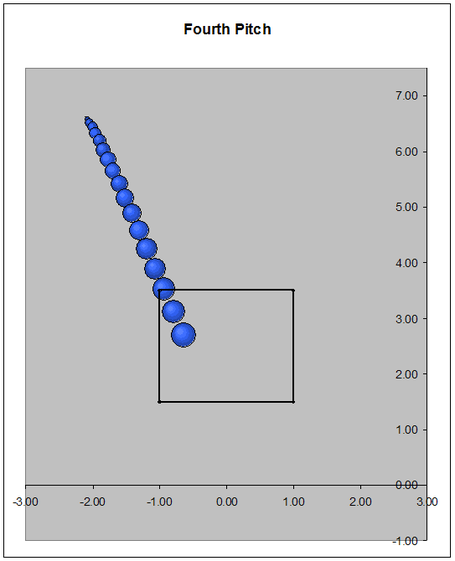 Verlander threw this one at 79 MPH and, again, nastily caught the outer half. Unfortunately, after seeing one just like it one pitch prior coupled with this Uncle Charlie grabbing more plate, The Nuisance managed to foul it off.

Unable to get AJ Pierzynski to window shop at another curveball, Verlander went back to the off-speed that caused Pierzynski to whiff on earlier in the at-bat. 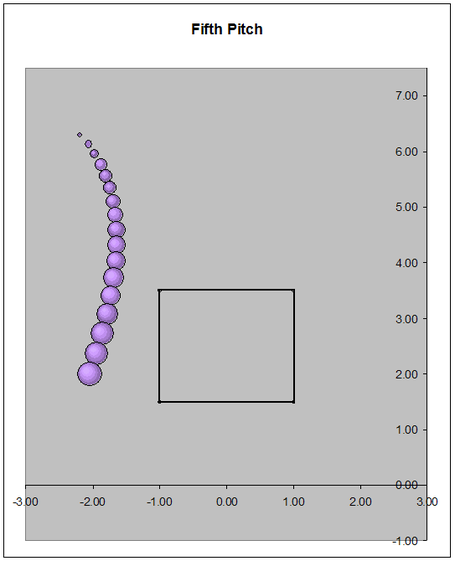 This change-up came in at 86 MPH again and as you can eyeball, about halfway to home plate this looked like a pitch that was going to paint the corner. Then, the spin of the change-up took hold and it dropped down and away from AJ causing him to swing and miss on the second change-up from Verlander.

All of the pitches from the entire at-bat are on this graph: 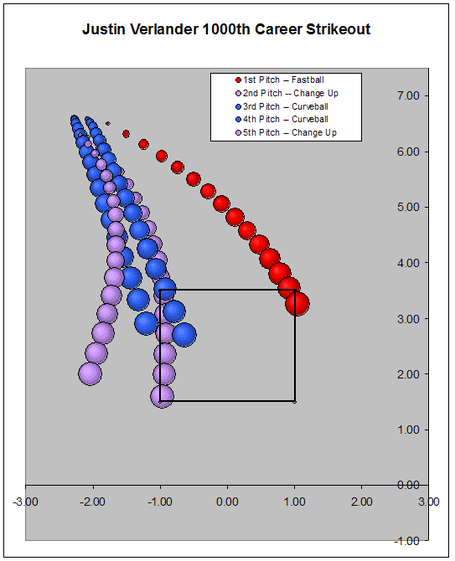 I enjoy this graph because it gives a good view of what Pierzynski is facing. Veralander painted the corners, ranged in velocity from a high of 97 to a low of 79 and it's all coming from nearly the same release point.

Pierzynski wound up shouting -- likely at himself -- after missing the final pitch and Verlander gave him the classic Verlander Stare while walking to the dugout. According to Jason Beck, Verlander was quoted as saying:

Since Verlander was watching Pierzynski, he couldn’t see the message on the scoreboard behind him about his 1,000th career strikeout. He didn’t know about it until he stepped into the dugout and got the ball from head athletic trainer Kevin Rand.

"I said, ‘OK, great. What’s it for," Verlander said. "A thousand strikeouts? All right. Cool. I’m not really one to follow statistics like that, so I’m glad somebody was paying attention."

To put into perspective just how impressive it is to strikeout 1000 hitters in your career, it has only been done 414 times since 1901. That seems like a lot until you consider that there have been 7156 people to strike out at least one hitter in their major league careers.