Rick Porcello didn't have the best results in his season opener. Playing in a home run hitter's ballpark with reports of the wind blowing out, we knew going in he'd have to keep the ball down. When the first four balls put into play by the Orioles were hit into the air, could disaster be that far behind?

It turns out disaster was looming in the bat of Brian Roberts, who hit a 3-run home run in the fifth inning to break the game wide open.

For the game, the Orioles had just one groundball out, as opposed to seven flyball. Five times a batted ball was classified as a grounder though, so four of them were scored as hits. That's obviously much worse than the 23% of groundballs that typically result in a hit in the MLB, so you can probably lay a bit of blame on infield defense. That isn't to relieve Porcello of the blame, but just to put things into some perspective.

Porcello didn't seem too alarmed by the game in his postgame quotes to MLB.com's Jason Beck.

"I think they know I'm a sinkerball pitcher," Porcello said, "and they're looking to hit the bottom half of the baseball. That's the best I can come up with. I thought there were some sinkers that I threw that were for sure ground-ball pitches, and they got them up in the air.

"Honestly, without the Roberts home run, I didn't really care. As long as you're getting outs, who cares how you get them, really? It wasn't like it wasn't sinking or I was leaving them up. I was making pitches and they were hitting them in the air."

But it turns out, the story is a lot more interesting than that.

To sum up the above paragraph: Porcello's pitch selection was closer to that in 2009 than 2010 but really unlike any yearlong trends of the past when you start to look deeper. The key difference is that he threw a lot more sliders today than he would have in 2009, when he mainly stuck to his fastballs with a few changeups and curveballs mixed in.

The end result was that he had 12 swings and misses in 81 pitches (14.8%), which was way higher than his career average of 6.5%. He struck out four in five innings for a 7.2 K/9 rate. All four strikeouts were swinging, and two of those were out of the strike zone and on the high side. By golly, we might actually be seeing a bit of "the art of pitching" at work.

Here's a chart of where (most) of the hits were located, per Brooks Baseball. The Roberts home run, by the way, was at about his knees, though it did seem to be centered over the plate. 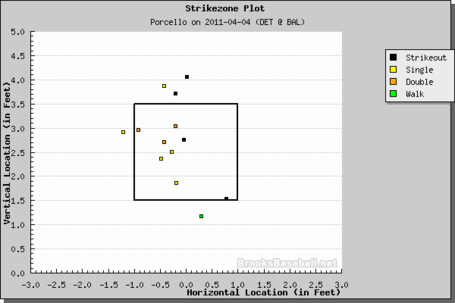 "It just kind of moved back across the plate. You look at the swing, and he's clearly trying to get underneath it. It's one of those things where you make your pitch and it wasn't perfect, but it wasn't terrible."

And here's the chart of all his pitches: 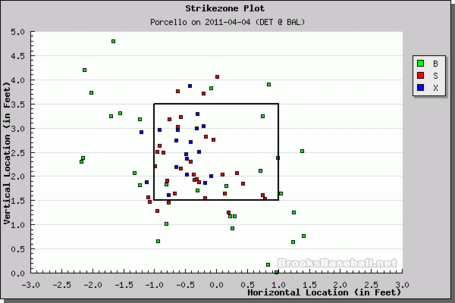 So you can see he left a few too many up, some of that to keep batters from sitting on his sinker, and the Orioles took advantage.

So my overall takeaway from this start? It was certainly interesting. At first, it appeared to be a rather forgettable one. But we saw some changes in how he approached the game. To that extent it will be interesting will be seeing if today's game -- with the different pitch selections -- was more of an outlier or if it will be more of a trend. We might be looking at Porcello 3.0, and that version might just be the best one yet if he polishes things up a bit.

The results may not have come today, but there were definitely promising trends.