How did Jim Leyland handle his bullpen in April?

Share All sharing options for: How did Jim Leyland handle his bullpen in April?

A little after the mid-way point in April, I penned a piece looking at Jim Leyland's bullpen usage through the lens of two advanced statistics: Leverage Index (LI) and Expected Fielding Independent Pitching (xFIP). I used this data to create (what I thought was) nifty graph that gave you a quick over view of who was getting the most important innings and who was pitching the best, independent of his fielders.

Since that article, I've changed my methods slightly. Instead of having the number of batters faced on the vertical axis, I've now made that the average leverage index for when the pitcher enters the game -- referenced as gmLI on Fangraphs and in this article. The horizontal axis is continuing to use xFIP but now the size of each bubble is the number of batters each pitcher has faced. Let me know if you like the change or prefer my last graph for these (hopefully) monthly bullpen updates. The graph and commentary is after the jump. 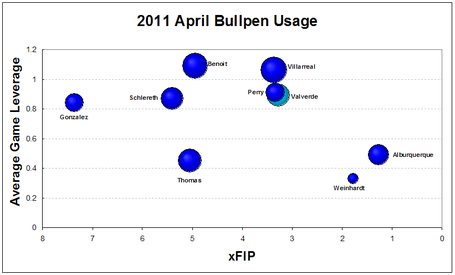 Some of my first thoughts were "holy schnikes! Al Alburquerque (Double Al) has been lights out." I mean, I knew that but I didn't know his xFIP had dropped down to a paltry 1.28. That said, he's faced the third fewest hitters (33) of any of the relievers the Tigers have used thus far -- edging out Ryan Perry (27) and Robbie Weinhardt (9) -- but he's been great. Though, his masterful relief outing against the Indians (sorry to drag back up that series) where he struck out six in three innings of work probably was a huge driver of that. Double Al has faced 33 batters and K'd 16 of them this year (48.9%). If you take out the nine batters faced and six punch-outs in Cleveland, he's struck out 10 of the other 24 hitters he's faced. That drops his K% to "just" 41.6%.

Even more remarkable? Coming into Monday night's game, Al Al has not even got a swing-and-a-miss on a fastball this year. Let me repeat: Al Alburquerque had thrown 54 fastballs (26 four-seamers, 28 two-seamers) with zero whiffs! That is absurd. However, he's thrown 79 sliders this year, gotten swings on 31 of them. Of those 31 swings, hitters missed 23 times. Twenty-three!

For reference, Lucas Apostoleris (who's data I'm using here) has posted the 2010 rates for swings, whiffs, et al. on his blog and gets this for four-seam fastballs, two-seam fastballs and sliders:

So, Al Al has been getting hitters to swing at his four-seamer 42% of the time and 29% of the time on his two-seamer. None of those batters that swung have missed it. It's safe to say that people will start hitting his slider and some will start to hit his fastball. I'm not breaking any theories here, but Double Al isn't likely to keep up this good of pitching. However, we've seen what a pitcher can do with an above-average slider, which Double Al has.

Moving on, in my last post Brayan Villarreal was getting just as high-leverage innings as Jose Valverde was and slightly higher-pressure situations than 8th inning man Joaquin Benoit. This no longer holds true. Benoit leads the bullpen with a 1.09 gmLI. What that means is that the leverage index when he comes into the game is about 10% higher than the average situation. Unfortunately, Benoit's performance has declined from my last post with his xFIP pushing 5.00.

Meanwhile, Villarreal's LI is still the second highest in the bullpen at 1.06. He is sporting a very good 3.37 xFIP with a 2:1 K:BB ratio. Villarreal's velocity had steadily increased -- likely helped by a trip out west to a bit warmer weather -- and with that his K% has moved from 20% between April 1st and April 12th to about 27% from April 13th through the end of the month.

Jose Valverde -- who's bubble is the teal one behind Ryan Perry's -- has continued his quality pitching with a 3.28 xFIP and 42 batters faced. That's the lowest xFIP of any pitcher with more than 40 batters faced in the Tigers bullpen and second to only Double Al among pitchers with at least 30 batters faced. Unfortunately, Valverde's gmLI has dropped from over 1.0 to just 0.89. That's not his fault, though. In his last five games, he's come into 9th innings with scores of 8-3 (@ Seattle), 3-1 (@ Seattle), 9-3 (vs. Chicago), 3-0 (vs. Chicago), and 7-2 (vs. Seattle; 5-run deficit). All of those are low-ish leverage situations (even the 3-0 and 3-1 leads) because they were all 'clean starts' in that he came in to start the inning.

So, when a team is up 3-0 at home to start the 9th inning, the leverage index is just 0.82 -- remember, around 1 is an 'average' leverage index -- which is below-average pressure. It's situations like these that I'd rather see Valverde deployed earlier (or the bullpen's second best reliever) in the game. In that particular 3-0 win over the White Sox, 2-outs in the top of the 7th inning was a 1.69 leverage index. Additionally, in the top of the 8th inning, there was one-on and one-out against Max Scherzer and the leverage index was 1.22. These are the situations I'd much prefer to see someone like Valverde, Villarreal or even Benoit (assuming he's healthy and just 'in a funk') who are presumably not as tired as starter Max Scherzer may have been and feature strike-out stuff. Valverde's the best reliever on the team, why not use him in more optimal situations? I digress, again, though.

Ryan Perry -- despite my sporadic grumblings of his straight fastball and lack of command -- has posted a very solid 3.34 xFIP out of the bullpen over 27 batters faced; or about half the amount that Jose Valverde's faced. His average leverage index when he enters a game is 0.91 in April, but that will likely climb as he gets more time in the bull pen grabbing the 6th, 7th, or the occasional 8th innings. Brad Thomas has been a popular whipping boy and I'm not here to defend him as he's been pretty bad. He sports a 5.05 xFIP but his average leverage index is just 0.45. So he's been getting pretty low-pressure situations. Daniel Schlereth on the other hand is getting about twice-as-pressure-packed outings and has posted a 5.40 xFIP. Someone explain this to me, please. Oh, and remember when he used to throw hard? Not anymore. His velocity started dipping in late 2010 and hasn't rebounded in 2011 yet.

As I mentioned, Benoit's performance has suffered. I don't know if he's hurt or not, but velocity readings don't alarm me. If you check out his velocity graph, you have to compare it to the graphs of 2007 or 2008 where he was in the bigs in April. Last year, he didn't pitch in the majors until April 29th. That is important because velocity for the average pitcher in April is about 1-1.5 MPH slower than it will be at the peak which comes in the middle of the summer. The most concerning thing for me is that Benoit's only K'd 7 of the 52 hitters he's faced. That is -- how you say? -- 'not good.'

He's getting $5.5 million for each of the next three years, but switching him with Villarreal runs the risk of actually increasing the amount of high-leverage innings he appears in given how many times Villarreal is called upon to put out fires in the middle of innings with men on.

So unto thee I ask: would you move Joaquin Benoit down in the bullpen chain until he 'looks right' or leave it as is?