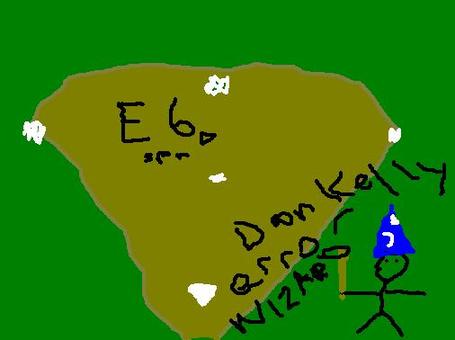 Uh, okay, so on that whole bird sound mass communication/social networking site I joked about writing a recap for today's Tigers-Yankees series finale. I have the day off from work so I settled in for a nice sleep, only waking up to use the bathroom.

After I did my business I ate some food. Eating eggs and tortillas, I casually looked at a newspaper and remembered there was a Tigers' game today. I sat down at the computer and watched A.J. Burnett no hit the Tigers through six innings. As I sat there, watching internet video and having gameday show me what pitches I could complain about, I thought to myself: Don Kelly has played an important part in this game....okay, I am lying. I was not thinking about Don Kelly at all but, in my defense, neither were you.

Sure, Troll Underpass Magnet School exchange student extra-ordinary, Don Kelly, had scored the Tigers only run via being a soft, squishy target. And, okay, Donnie had managed to be a part of the Yankees scoring 2 runs. Wait, I forgot where I was going with this except to say Don Kelly was batting lead off and playing centerfield and that it worked out, somehow. Otto von Bismarck once said that there was a providence protecting drunkards, idiots, children, and the United States of America. Well, Don Kelly looks like a kid, I'm not sure if he's an idiot, he could be drunk, and he is from the United States of America.

Providence surely protected Don Kelly today, because he later played a part in three more Tigers runs with a sacrifice bunt, advancing Ramon "I Don't Have a Real Nickname" Santiago to second so he could score on a Boesch single. Then Don "El Don de los Errors" Kelly caused that one guy who was filling in for Derek Jeter (Eduardo Nunez) to make another error, allowing for runs 4 and 5 to score.

Lost in my fixation with the Don Kelly Experience is that Rick Porcello scattered 8 hits, 2 walks and 3 strike outs over 7 innings. While the 8 hits raises a mauve flag for me, Rick battled his way out of some tight spots and gave the Tigers another quality start. Jeez, this is probably the worst recap in history. (Editor's note: I've seen worse!) So far the new-look Tigers line up does not look entirely putrid and is not making me want to vomit up buckets of bile in an infuriating stomach revolt. Oh, yeah, Brennan Boesch hit a home run and had 3 RBI.