MLB Draft 2011: Tyler Collins excited to be drafted by Tigers

Share All sharing options for: MLB Draft 2011: Tyler Collins excited to be drafted by Tigers

Tyler Collins has never spent much time outside the southern United States, but he hopes to be calling Connecticut "home" soon -- at least for a couple of months. The 21-year-old native of Trophy Club, Texas, in the Dallas-Fort Worth area was drafted as an outfielder by the Detroit Tigers in the sixth round of the 2011 MLB First-Year Player Draft last week and may soon be headed north. 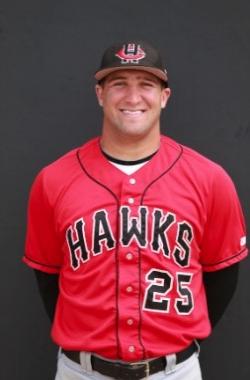 "Colorado is about as far north as I've ever gone," Collns told BYB on Monday. "I've always wanted to go up in the New England area. Connecticut has the short-season team for Detroit. So I'm actually looking forward to getting up there and playing some baseball."

Before he can be assigned anywhere, Collins first has to sign a contract with the Tigers. Because he is a junior college student with a signed letter of intent to continue his baseball career with Texas Christian University's Horned Frogs, Collins does not have the help of an agent when going through the process of contracts and bonuses. However, he does have the help of an adviser, Kyle Dison of Xclusive Sports Management (XSM), as he works through the details.

"He's been a lot of help," Collins said. "It's just slow right now. The Tigers have been great. The guys I work with, they're both really good. It's just a slow process of getting the contract, the bonus and everything worked out."

And the likelihood of a signing coming soon?

"I haven't really made a decision yet," Collins said. "TCU is a great place. (Frogs coach) Jim Schlosshnagle is doing a heck of a job right now. At the same time, pro ball and Major League Baseball has always been my dream. I guess it will just depend. I haven't made that decision yet. It will probably come down to the end of the summer."

Collins, listed at 5-11 and 200 pounds, played high school football his freshmen and senior years, as well as baseball at Justin Northwest High School in the Fort Worth. Baseball was always his passion, however, and he attended Baylor University for a year before transferring to Howard Junior College of Big Spring, Texas, this past season.

With every team he played for, Collins made it clear he had no trouble hitting the baseball. As a freshman with Baylor, he batted .404 with a .459 on-base percentage and .506 slugging average in 29 games. He also stole three bases.

"I've got a plus bat in the average column and in the power column," Collins said. "I'm aggressive at the plate. I run pretty well. I don't grade out as high because I'm just under 6 feet. Defensively I'm solid. My arm could improve but that's just about it."

Minor League Ball's John Sickels wrote of Collins: "Sleeper prospect with a chance to hit for power and average."

Although his baseball future remains undecided, Collins is just enjoying what an extraordinary month he's had. He turned 21 last Monday, and was drafted b the Tigers the following day at 197th overall.

"It was a great week for me," he said. "My birthday was fun. I celebrated with my family. Nothing huge. The next day was the best birthday gift that I ever had. Getting picked up by the Tigers. I don't think it's all sunk in yet completely. It all feels surreal to me."