Breaking down Porcello's poor start against the Mets

Share All sharing options for: Breaking down Porcello's poor start against the Mets

To say Rick Porcello struggled against the Mets would be like saying Jack and Jill had a little slip-up on top of the hill. As we all know, Jack fell down and broke his crown, and yesterday all the king's horses and all the king's men couldn't put Porcello back together again. I think that's the way the story goes, anyway.

"As stuff goes, I feel like it was as good tonight as it's been all year. I feel like it's just a matter of pitch-making, leaving balls up, making some mistakes to some guys."

Leyland is correct. Porcello may be as well. It sure doesn't seem like he had his best stuff. It's hard for an outsider to leap into Porcello's head and feel how the pitches felt to him. What is definitely true is that wherever he put it, the Mets seemed to get a hit off him. What is also true is that Porcello was not putting the ball where Avila placed his glove. Combine the two and you have a recipe for an awful start.

For example, here's the only home run Porcello allowed.

(Screen shots taken from this clip at MLB.com)

Avila sets up low and inside: 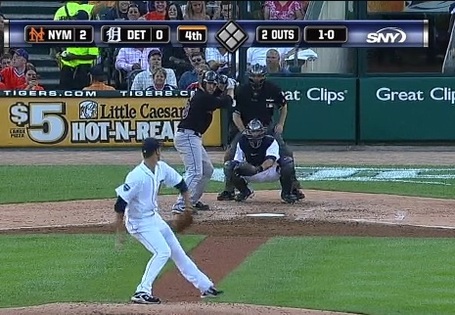 And Porcello grooves one: 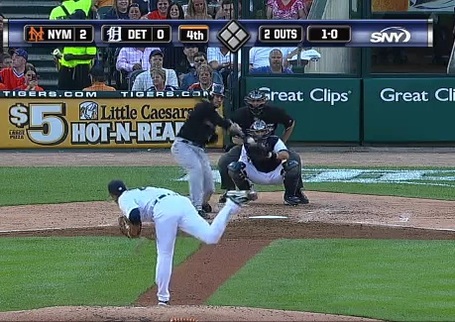 Looking back at several of the Mets' highlights for the night, you'll find that to be a common theme. Avila was setting up low, and Porcello was leaving the ball high. However, if you look at the results of balls put into play you'll notice that it didn't really matter where the ball was. Pitches he kept low turned into singles just as easy as pitches grooved down the middle turned into souvenirs.

Via Brooks Baseball, here are the results. (click the image for full size) 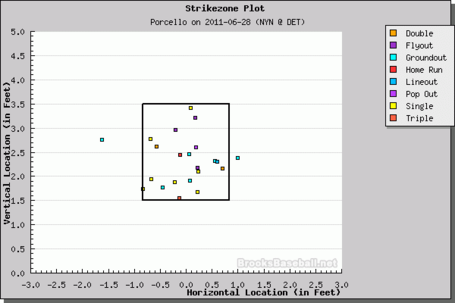 And here's a plot of all his pitches: 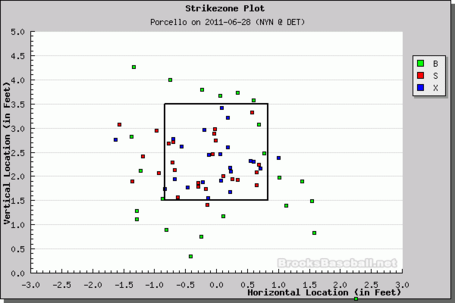 Holy crap, hey? Kind of looks like a birdy, or an angel or something if you stare at it too long.

But I think perspective is in order, isn't it? So let's see what a more successful start earlier in the year looked like.

We can tell Porcello kept the ball lower in the strike zone a lot better in that game, which came June 7 in Texas. It should come as no surprise he had 14 ground balls and 7 fly balls that day, while the Mets had 10 ground balls and 12 fly balls last night. They also had the most line drives off him since May 5. What might surprise you is that for most of season the ground ball to fly ball ratio has been nearly equal for Porcello. He has the worst GB% of his career (45% vs. 54% as a rookie.) Where he's been most successful is limiting those hard-hit line drives that often fall in for hits.

Another observation: Porcello was throwing harder against the Mets than he had earlier in the season. Just looking at this month, he allowed the Twins two runs while his four seamer averaged 90 mph and two seamer 89.4. He gave up one run to the Rangers where both the fastballs were about 88.5. Last night, his four seamer was clocking 92.3 average and two-seamer 90.5. The slider, too, was coming in about two miles per hour fast -- and with fewer rotations -- than his season average.That might have resulted in less control than he typically has, although failures against the Rockies and Dodgers cannot be attributed to pitch speed.

A third observation: Left-handed batters are killing him this year. It's no wonder that the Mets found success after stacking the lineup with lefties and switch hitters. They're hitting .342 with .385 OBP and .515 slugging. Wow. That's .900 OPS. Right handers are hitting just .236 with .291 OBP and .364 slugging. Huge difference. Why is that? This split was not nearly as pronounced the past two years, where righties had OPS of above .720 and lefties never more than .780. (Side note: Max Scherzer struggles vs. lefthanders even more. This is a problem he didn't have last year either. Detroit better get to the bottom of this.)

I am far from an expert, but I'm hesitant to call it a mechanics issue either after comparing videos from earlier in the season to last night's. Porcello almost perfectly duplicated every motion from a May start where he pitched an eight-inning shutout. Of course, his fly ball to ground ball ratio that day was 11:10 that night. Maybe the game the Tigers need to compare Porcello with is that Texas start June 7 to figure out why he was able to keep the ball down so well then compared to much of the past two months.

Finally, we should mention Porcello had the extra day of rest yesterday. He has had 5 days of rest (as opposed the normal 4) three times this season. On normal rest, his OPS against is .778. On extra rest, it's .942. His strike out rate pluges from 5.0/9 innings to 2.5/9 innings also. Is this an actual problem for Porcello or a small sample size thing? I don't know.

In the end, I'm afraid I don't have a lot of answers. There don't appear to be any easy ones. But one thing seems for certain: Porcello and the Tigers must find a way to keep the ball down better, and they really need to work on finding a pitch that gets whiffs a bit more consistently. At the bare minimum, he has to hit his spots better. If he can do those things, he can go from being a serviceable third starter to one who can really help the team make a playoff push. If not, I fear there will be more broken crowns ahead.