Share All sharing options for: Tigers All-Star Moments: Bran-Torino carries the vote in 2009

Today through July 13, we will be counting down the Top 10 Tigers All-Star Moments in a series sponsored by Head and Shoulders. Some of these may be exact moments in a Midsummer Classic, others might stretch the definition of moment a bit. But I hope this series will be fun and shed some light on some Tigers history as well. Don't take the exact rankings too seriously, but do have fun debating what you think the top moments should be!

Our first All-Star moment takes place in 2009 -- before the game, even before the infamous home-run derby. Leading up to the break Tigers third baseman was having the most incredible half-season of his life. By the end of June, he had 18 home runs, a batting average of .275 and a slugging average of .521.

But he had a problem: He was out the outside of the All-Star Game looking in. With the the Rays' Evan Longoria voted the starter and the Rangers' Michael Young named as a reserve, there was no where to put Inge when the roster was announced on a Sunday afternoon.

Then came a final chance: Fans get to vote in one last deserving player from the AL and one from the NL. Inge's name was put into consideration for that spot. He, of course, had one little problem. People don't generally vote for Tigers in popularity contests. Further complicating things, he was on the ballot with the Rangers' deserving second basman Ian Kinsler and Angels' third baseman Chone Figgins. Even the Rays' Carlos Pena was up for election. So it seemed there was little to no chance. 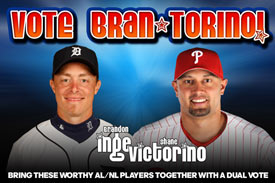 That's where we were wrong. Quickly, someone in the marketing departments came up with an idea: teaming up with an NL team to give both players an extra push with the fans. With the movie Gran Torino featuring Detroit in theaters only months earlier, and the Phillies' Shane Victorino on the NL's portion of the ballot, it was a match made in heaven: Vote Bran-Torino! They even made a poster.

Philadelphia and Detroit fans finally had something they could agree on. The voting was down to the wire and the outcome uncertain until then end, but it worked. MLB.com :

Tigers third baseman Brandon Inge and Phillies center fielder Shane Victorino are your choices in the dramatic 2009 All-Star Game Sprint Final Vote, comeback survivors of the wildest overall balloting in the history of a four-day event that decided the 33rd and final roster spots for the 80th All-Star Game on July 14 at Busch Stadium.

It was the first time in Final Vote history that two players won after trailing in each of the first two voting updates. The alliance unquestionably mattered, as fans in Detroit voted heavily for Victorino and fans in Philadelphia did the same for Inge.

It was exhilarating for fans who were pounding their keyboards with captcha numbers to get as many votes for Inge in as possible.

And oh yeah, the game was pretty good, too. In a moment that nearly made this list instead, Tigers outfielder Curtis Granderson hit an eighth inning triple and later scored the go-ahead (and game-winning) run in the eighth inning on a sacrifice by Baltimore's Adam Jones. Had it not been for a miraculous over-the-fence catch by Carl Crawford in the seventh inning, Granderson very well may have been named the game's MVP.

Postscript: The funny thing about the AL voting was that so many of the players ended up in St. Louis anyway. When Longoria pulled out of the game with an injury, Young ended up starting, and Figgins was named to the reserve squad. Pena, too, was named to the team, when Red Sox second baseman Dustin Pedroia bowed out. (Kinsler very much deserved to go, but AL manager Jon Maddon rewarded his own first baseman instead.)

Oh, and you've read all this way and I haven't even mentioned the fact Inge went 0-fer in the home run derby? C'mon. This is a series celebrating the best All-Star moments, not the worst. But it was kind of funny, wasn't it?