Detroit's average power, lack of baserunning hurts in getting the run home

Share All sharing options for: Detroit's average power, lack of baserunning hurts in getting the run home

We also know that a reciting of the team's batting average with runners in scoring position only tells a small bit of the story. Batting average is kind of a flawed stat to begin with, and hits don't always result in runs.

Last week, I made a chart and told a few stats about how the Tigers do with runner in scoring position. As fans, we think they do awful. But actually, they tend to hit pretty well, get on base pretty well, and have an above-average slugging percentage. Still, that doesn't feel like it tells the story, does it? The Tigers just don't seem to get those runners home nearly as much as they should, do they?

So over the weekend I took it a step farther. Using Baseball Prospectus' stats, I decided to explore OBI. That is, "Others Batted In." A player with 60 RBI but 20 HR is batting himself in a third of the time. Take away the RBIs from driving yourself in with a home run, and you have Others Batted In. So the player from the example has 60 RBI but 40 OBI. Pretty simple. Baseball Prospectus takes it a step further by recording what bases the runners were on and whether those runners scored. Using that, you can check what percentage of the time a player or team gets the runner home from each base and overall.

It took a bit of elbow grease, but I calculated how each team in the AL did with runners on base, and how each of the Tigers did as well. The average AL team gets runners home from any base is 13.97% of the time; the Tigers 13.34%. So they're actually a below average team. Another example: Victor Martinez, Jhonny Peralta and Alex Avila are the three best in Detroit at getting the runner home from third, ranging from 55.8% for Martinez to 42.3% for Avila.

Two key reasons the Tigers don't perform quite as well they could are explained by the fact they have league-average power and below-average baserunning. In short, if you've got a runner at first base, you get him home with power. If you've got a runner at second base, baserunning ability helps explain whether or not he scores. The Tigers are exactly league average when it comes to ISO, but they're significantly worse than average in baserunning. So they don't get the run home as well as they could.

Keep reading for a few different ways of looking at how the teams stack up. I'll have a post on the Tigers players as well, later on.

If you feel like there's too many words, I've basically hit all the key points so far in the introduction so all you have to do is look at the graphs to see how the Tigers compare.

I should note what this stat tells us, and what it doesn't. This data tells us what percentage of the time the runner will score when the "average" player from each team is up to bat. It does not tell us the percentage of time you should expect the runner to get home during the course of the inning. A quick example to demonstrate. Say a runner is on second base. The first batter strikes out. The second batter hits a double to score the runner. Our results would say 50% of the time the average player gets the runner home from second, even though the runner scored 100% of the time in our example.

While this may appear to tell you the same information as batting average with runners in scoring position, it actually differs greatly because it tells you if the runner actually scored. A single with a runner on second should score the run, but doesn't always. That might be the location of the batted ball, or it might be due to the player on base being a slow ox. As well, a sacrifice fly will score a run, but it doesn't count towards batting average with runners in scoring position.

Another note is that this stat uses plate appearances. So one area of weakness is that it will underrate players who are walked -- intentionally or otherwise. For example, if Miguel Cabrera comes up to bat with runners on second and third, he's probably going to end up being pitched around. So his OBI% will be lower because of this. Remember, the stat is based on how many runners were on base when the batter came up, and how many times those runners scored

This stat seems intended mostly for the use in looking at individuals, but I applied it to team and league averages to help gain some perspective on how individuals are doing this year. I also found when you added a few other statistics to the analysis, it helped explain why a team such as the Tigers, who bat relatively well with runners in scoring position, falls below league average in actually getting the runners home.

As you might expect, teams score runners from third base most often, and from first base least often.

The data is through Thursday's games and came from Baseball Prospectus.

Remember you can click each graph to make it full-sized. 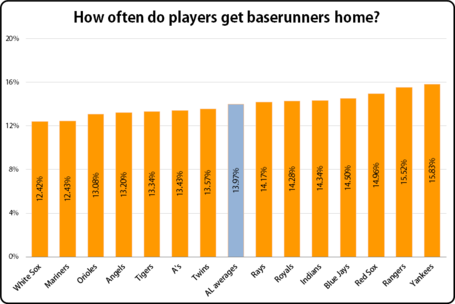 So you can see here, the average baserunner is going to score 14% of the time during a typical plate appearance. Detroit checks in about 1.7% worse than the league average, and second worst in the AL Central. 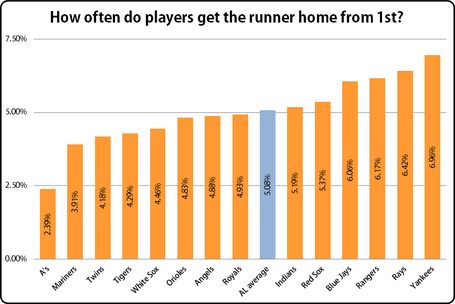 Already we can begin to predict why Detroit trails the league average. The Tigers are all the way down in 11th place in the AL this season at scoring runners who stand on first base. I want to explore this for a moment before we move on.

What factors do you think will help decide if the runner gets home from first? I suspect most people came up with some variation of this answer: the ability of the batter to hit for power, and the ability of the runner on first to get around the bases. (And not just because I teased it in the introduction!) As we like to say, when Miguel Cabrera is up to bat the runner on first is in scoring position. If, say, Will Rhymes were the batter that would not be so. Baserunning is important, too. It might decide if a double scores the faster runner from first base or if the slower runner settles in at third.

I ran a regression analysis using the statistics isolated power (ISO) and Fangraphs' baserunning data. In stats speak, ISO was statistically significant at an extremely high level (more than 99.9%). Baserunning was significant at a pretty high level, too, just not quite as high (96.7%). Combining the two stats helps explain 71% of variation. So I created a chart comparing ISO and the ability of a player to get the runner home from first. As you can see, ISO is a pretty good predictor. I took it a step further by color coding the four best and four worst teams by baserunning. The results fit the hypothesis pretty well. 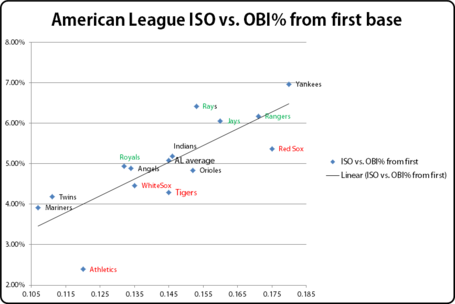 As you can see, the Tigers and Indians are almost exactly at the AL average in ISO, but the Indians, with a baserunning stat of 0.4 runs above averae, get runners home better than the Tigers, who are near the bottom of the AL at -7.7. In case you wonder, the Orioles are also below average in baseruning (-1.6).

See, sometimes statistics and the eye test do go together! 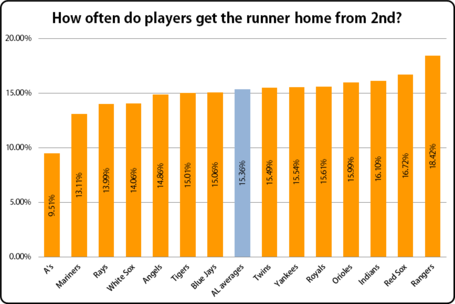 Again the Tigers are below average. Again, the same reasons can apply, but we have to change the statistics we look at a bit. How do you get a runner home from second base? Well, it's probably going to take a base hit. It's not going to require the batter to hit a home run and it might not require the batter to hit a double. So that's the biggest part of it. The other part of it comes back to base running. A good baserunner will probably score. "Station to station" baserunning will obviously not score as the runner stops at third.

I ran the stats and was happy to find the results more or less agreed with my ideas. Batting average and base running explains about 50% of the variation. If you substitute on-base percentage, isolated power or slugging average, you explain less of variation, sometimes dramatically less. So basically, these two stats don't tell all the story, but they tell the story fairly well.

So here's the plot of that for those interested. 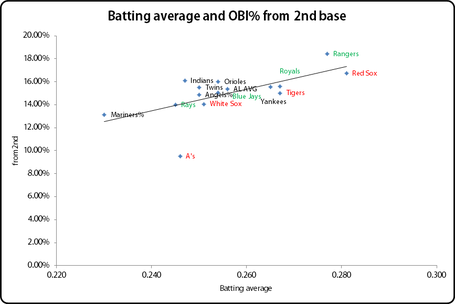 Finally, the Tigers are above average when it comes to getting the runner home from third base. 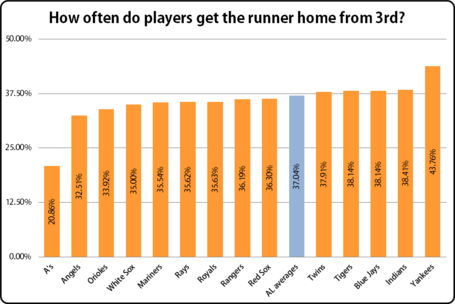 Finally, we have a statistic the Tigers are above average in. Kind of a shocker too, isn't it? They are actually pretty bad at batting with a runner on third base and less than two outs. But they're pretty successful at getting the runner home overall.

Again, I tried to think of stats that might explain why a team succeeds here. A few suggestions: The ability to hit the fly ball, as a sacrifice fly help score the run. The ability to make contact, as a strikeout is not going to score the run. The ability to hit for average, because a base hit is almost certainly going to score the run. Well, I ran through all my ideas and tested the ones that make the most sense. It turns out, none of them are particularly good at explaining why the runner on third scores. Getting past 10 or 12% of the explanation was impossible. Batting average is the best, but it's far from a great fit.

Maybe the Tigers just have the right batters the plate when the runner is on third. As the next post will show, the players who have the most opportunities to score the runner from third are in fact the meat of the Tigers' lineup. It's not a real palatable answer to me, but it's the best I've got right now. In any case, at least the Tigers do score runners from third pretty well.

Baserunning is really hindering the Tigers right now. Unfortunately, most of the team's best batters are simply not good baserunners, so that's probably not going to change any time soon. This offseason the team might want to consider baserunning when making positional player additions.