This is the second part of some analysis of how often teams and players are able to get runners on the bases across home plate.

In the first post, I explored the OBI stat available at Baseball Prospectus. It stands for Others Batted In. Essentially, it is simply calculated by RBI - HR. We can take it a few steps further by noting which base the runners were on when the batter came to the plate, and whether those runners scored. So now we have a pretty good idea of how teams do at driving runners in, and we know some of the factors that lead to success: isolated power, batting average and the runner's ability to make the most of the hit. You'll note that one of those factors has nothing to do with the batter. That's why any stat that relies on two players acting in concert isn't going to be perfect.

We also have to acknowledge this stat isn't perfect because it uses plate appearances when calculating the percentage of success. The problem is that if the batter is frequently walked -- intentionally or otherwise -- his OBI% will suffer. Take Miguel Cabrera for instance. He has been walked 26 times out of 110 plate appearances when a batter is on second base. Unless the bases were loaded, that's 26 times he's not going to get the runner home. If you take those walks out, his success jumps from 21% to 30%. Another problem is that the sample size is by nature smaller.

That said, I like this stat better than RBI or batting average with runners in scoring position. I think it tells us which batters you want up in key situations, and which batters you don't. Like with any stat, as long as you understand the limitations you should be OK.

In the rest of this post, we'll look at how some of the Tigers players do.

First off, a few quick notes on how I put together this little study. Getting the Tigers numbers was pretty easy. But numbers in a vacuum don't tell us a whole lot. So I decided to compare Detroit's players to the rest of the American League. Anyone who has familiarity with statistics knows it's not always useful to look only at the average. So I decided to find the best and worst players, as well as the 90th, 75th, 50th, 25th, 10th percentiles.

As I don't want to compare Tigers position players to, say, a backup catcher or a pitcher who batted during interleague, I decided to find a good cutoff mark. I set the cutoff at 20% of the opportunities of the leader in each stat. That cut the sample down from about 350 to around 175. Player who saw regular playing time or even a lot of time off the bench generally made the cut. So I liked this solution. I also used approximately the same cutoff for Tigers players. This left me with most of the regulars we've seen this season -- including Brandon Inge, who we'll see again by the end of the season.

Here's the percentile chart, if you're curious. 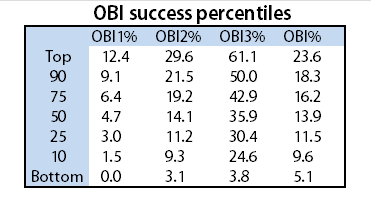 Wilson Betemit's stats include his time in Kansas City. It might not be a perfect translation to what we can expect in Detroit, but I wanted to have a bigger picture.

Finally, I want to explain the charts you're going to see. Using those percentiles, I made a quick color code. Tigers among the best 10% in the AL are shown in the darkest green. The 75th to 90th percentile is lighter green. The 50th to 75th percentile is the lightest green. Reverse that for players who are worse than the median. The 50th through 25th percentiles are light red, the 25th through 10th are darker, and the 10th to worst in the league are the darkest red.

HOW THE TIGERS COMPARE

OK that was a lot of explanation, but I just wanted to get some possible questions answered. So now, here are the stars of the show. 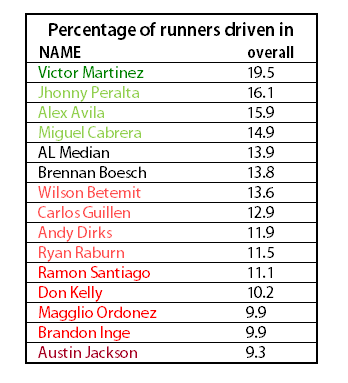 The above chart shows you what percentage of the time the batter drives in a runner on base. With a 19.5% success rate, Victor Martinez doesn't just lead the Tigers, he's one of the best in the American League. His figure ranks him as eighth overall, or the top 5% of the league. Josh Hamilton leads in this stat with 23.6% success.

By the way, Miguel Cabrera has had 337 total opportunities (through Sunday), which ranks him fifth in the AL.

Adrian Gonzalez leads the league in the number of runners driven in (74), but he has also had the most chances (377). So when we look at percentage, Josh Hamilton leads with 23.6%. 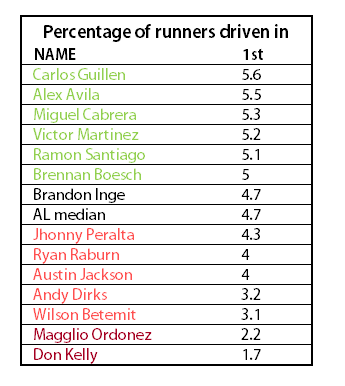 First base is the hardest base to drive runners in from. You need to consistently hit for power and you need some good baserunners ahead of you. Carlos Guillen is a surprise leader here. I mean, major surprise. Of the batters who have been around all year, Alex Avila, Miguel Cabrera, Bennan Boesch and Martinez come as no surprise I'm sure. I was surprised to see Santiago, but he's had a few long hits in the limited opportunities he's had.

Austin Jackson, who is the worst Tigers at getting runners home overall, ranks a bit higher on this list because of his fairly high number of extra-base hits that stayed in the park. "Singlio" Magglio Ordonez and Don Kelly just don't have the power to get runners home. 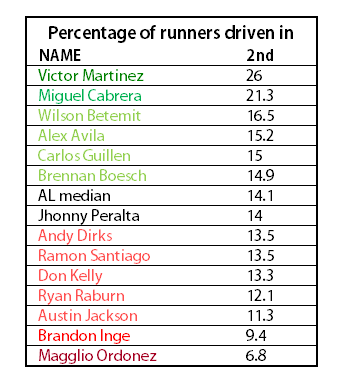 Batting with runners in scoring position is what Martinez really hangs his hat on. His 26% ranks him seventh in the AL. The regulars are found here as well for Detroit: Cabrera, Betemit, Boesch, Avila. We see some of the worst batters on the team near the bottom: Jackson, Inge, Ordonez.

Cabrera has had the most chances on the Tigers, with 110 opportunities. He ranks 11th in the AL. 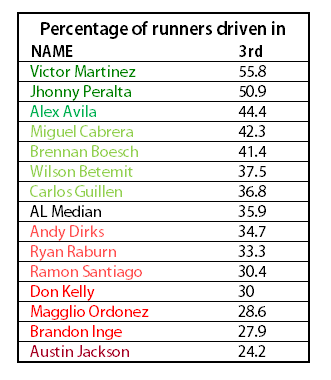 Again, we see V-Mart. He has successfully got the run home 24 out of 43 times for 55.8% of the time. That ranks him fourth in the AL. Peralta, who also is successful about half the time, ranks 14th.

I like the way the Tigers have some of their best batters all stacked together. But Jim Leyland does them a disservice by having them in the 4th through 8th spots in the lineup. If anything, Austin Jackson and Magglio Ordonez should be near the bottom. Having a lack of any real on-base players at the top of the lineup certainly hurts.

Here are links to find the most up-to-date information