What the Tigers starters throw when, and sometimes why.

Share All sharing options for: What the Tigers starters throw when, and sometimes why.

If a batter comes to the plate expecting Max Scherzer to throw a fastball, there's a good chance he's going to guess correctly. Scherze deploys it almost 67% of the time, according to Gameday PitchF/X data presented at Fangraphs.com. You know who mixes it up the most? The guy with a 100 mph fastball. Justin Verlander goes to his less than 56% of the time.

As you can probably guess, I spent this morning looking at pitch selection data. What you might not know is that I organized that data into some nice stackable bar charts so we can get a pretty good idea what kinds of pitches Tigers starters throw in what kinds of counts.

It's kind of neat, in a nerdy sort of way.

So I learned that Verlander keeps the batter guessing at two strikes by really cutting back on his fastball while highlighting any of his other three pitches. Max Scherzer likes his changeup quite a bit but also uses a slider to put the batter away. If Brad Penny gets ahead of you, you're probably going to see a curveball. And unless you've got two strikes, Rick Porcello will probably throw you a sinker.

Here are some of my observations and five fun graphs.

Notes: All graphs can be expanded to full size by clicking. ... Most data came from Fangraphs.com, Porcello's pitch selection came from TexasLeaguers because Fangraphs doesn't separate 2 and 4 seam fastballs. ... Pitch identification is not perfect, but these graphs should give a pretty close approximation. ... The colors are consistent for all the pitchers. Dark blue will always be a fastball, red a slider, green a curveball and purple a changeup. Brad Penny's split-finger fastball and Rick Porcello's two-seam fastball -- both called "sinker" on the charts, are shown in light blue.

OK that stuff all said, here we go. 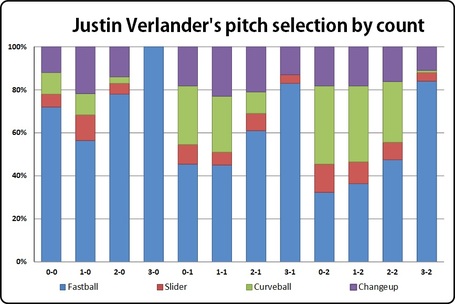 When Justin Verlander needs a strike, he goes to his fastball. So it shows up especially often in his 0-0 count, 2-0, 3-0, 3-1 and 3-2. When it's early in the count and Verlander wants to mix it up a bit, he'll throw a changeup. That pitch shows up most in 1-0 and 1-1 counts. When Verlander gets to one strike, expect his breaking pitches to make an appearance. He mixes up his slider and curveball relatively well, and continues to use his changeup a bit. When he wants to put the batter away at 0-2 or 1-2, he'll especially go to his offspeed pitches. Verlander seems to use his curveball more than anyone in the Tigers' rotation.

Not surprisingly, if you check out the strike percentage of each pitch, curveballs are thrown for strikes only 58% of the time, compared with the mid-to-upper 60s for all of Verlander's other pitches. 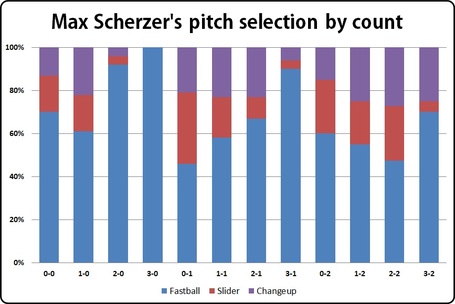 Next up we have Max Scherzer. You can immediately notice one difference from Verlander: Scherzer doesn't throw a curveball. You should also notice immediately Scherzer likes to use his slider a lot more frequently than Verlander. Aside from that, here's two quick notes. The first is that he uses his fastball a lot. The second is that Scherzer apparently feels comfortable with his secondary pitches in almost any count. He's still most likely to throw a fastball when he's gone to 3 balls, when when he's in a full count expect the unexpected.

It's interesting to note he likes to go to a fastball in a 0-2 count, but if he can't put the batter away and then finds himself at 1-2 or 2-2 he'll start to substitute a changeup for the fastball. Actually, Scherzer will go to a changeup more often than any of his rotation mates. 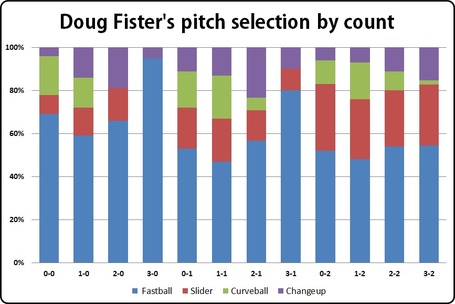 Doug Fister, too, likes to start off with the fastball. Like scherzer, he rather likes his slider as well. The big difference is that you're going to see that slider quite often when he gets to two strikes. If he doesn't get you at 0-2, he's going to add the curve in more often at 1-2. Meanwhile his changeup most often shows up in 2-ball counts. He throws his fastball the least in 1-1 counts. 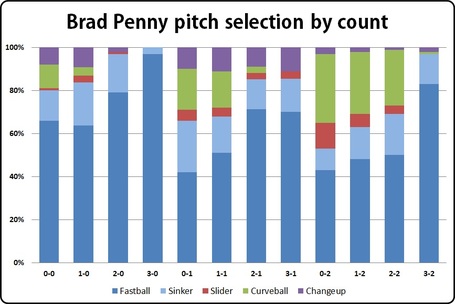 Finally, we find a guy with five pitches in Brad Penny. Like the previous three, he really likes using a four-seam fastbal, especially when he's behind in the countl. Unlike the previous three, he adds a sinkerball to his repertoire by throwing his split-finger fastball. That's a pitch he began working with in 2010 under Cardinals pitching coach Dave Duncan and continues to refine in 2011. He tends to go to it early in the count, preferring to pitch to contact. He'll also use it a bit when he's behind the count and doesn't want to risk walking the batter. It shows at up 0-1 (24%), 1-0 (20%), 2-2 (19%), 3-1 (18%) and 2-0 (18%).

Once Penny's gotten ahead of the batter, his preferred pitch at 0-1 is the fastball, but the curveball begins to show up. At 0-2 or 1-2, he's going to try to get the strikeout with the curve almost a third of the time. At 0-2 is also when he'll give the slider a try. However, he still likes to use his four-seam fastball when he's ahead. In 3-ball counts, he really prefers his four-seamer as he attempts to avoid the walk. 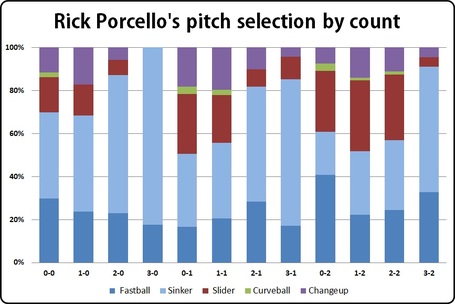 Porcello is probably the most interesting Tigers starter, so I saved him for last. He throws four main pitches: A four-seamer, a two-seamer, a slider and a changeup. On some pitch counts, and sparingly, he'll throw a curve. Porcello doesn't seem to have a lot of confidence in it; you'll notice he mainly throws it in no-ball counts.

Of course, it's evident right away that Porcello loves his two-seam sinkerball the most. Especially when you compare him with another guy that throws a sinker, Brad Penny. On pretty much every pitch count, Porcello is going to go with his sinker. Again, a reminding caution that pitch identification isn't perfect.

But when he smells blood in the water -- two-strike counts -- he's not afraid to shelve the pitch and go for the strikeout. So you'll notice at 0-2 he'll switch to his four-seam fastball or his sinker. At 1-2 or 2-2, you're still quite likely to see a slider. It should come as no surprise the slider gets whiffs 11% of the time. But if he gets to a full count, he's going back to the safety of the two-seam pitch to avoid the walk. You'll notice that's a theme whenever he falls behind in the count. At 2-0 and 3-0, it's almost certainly going to be a sinker.