Scherzer, Porcello might be more consistent than you think

Since creating yesterday's chart was fun and everyone seemed to enjoy it, I decided to make another. This one focuses on the rotation's quality start percentage so far this year.

The league average for quality starts is 55%. The Tigers rotation for the season has averaged 57%. That includes everyone from Justin Verlander (88%) to Charlie Furbush, Duane Below and Jacob Turner (0% apiece). It includes only the Tigers start from Doug Fister.

So I thought I'd make that chart showing you how it has shaken out for the year. I included Coke since he had most of the starts for the fifth starter. I included Doug Fister's season totals, which came mostly with the Mariners.

As you can see, the only reason the Tigers are above the league average is because of Verlander. (Without him, the WS percentage is just 43%.) Despite some thoughts to the contrary, Rick Porcello and Max Scherzer are pretty close to the league average. Phil Coke was awful, while Doug Fister promises to be around average if the TIgers defense doesn't do him too much damage.

So let's take it up a notch. 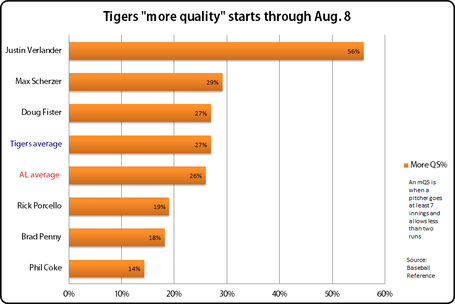 The above chart (you can click it to enlarge to full size) shows the percentage of time a Tigers starter goes at least seven innings and allows two runs or less (earned or otherwise). That is an average of 2.57 runs per nine innings as the floor. Doug Fister's stats are obviously accumulated mostly with the Mariners. (As an aside: I believe that chart to be accurate but the game finder on baseball-reference gave me about three different sets of answers to the exact same question, so I'm not 100%.) I called it "more-quality" starts because 1) I am not creative, and 2) it didn't feel like it was a really awesome start or a super start or anything of those superlatives.

This time the results are a bit different. Verlander remains the most consistent starter, light years ahead as you'd expect. Fister, too, shows a propensity for going deep into a game while limiting the damage. Obviously playing in Seattle may have given him an assist there, but he should remain safely above Phil Coke, in any case. Max Scherzer and Rick Porcello switch positions when you compare this stat to quality starts. Porcello, as it turns out, is good at going at least six innings and limiting opponents, but he's not real great at lasting the full seven. Maybe that's Jim Leyland's fault. Porcello would be tied with Scherzer, but twice he went 6 2/3 innings while allowing two runs or less.

From the Tigers' point of view, I like this stat because it shows a starting pitcher who safely hands off the game to the team's late-innings bullpen has put his team in a good position to win the game. A stat I'm sure you'll fear the jinx of, Detroit is a perfect 50-0 when leading after seven innings.

I could go even further, but I'm running out of time today. I'll try to find more things to chart and make this a more frequent feature. Any suggestions, always happy to hear them. May or may not actually be able to do them but I'll give it a try.