The same as the number of bases on a baseball diamond. Four.

Via Dave Hogg of the AP:

Just something to keep in mind.

It has to be Victor Martinez's three run home run in the 6th inning.

If you decide to intentionally walk Miguel Cabrera, you need to be aware of the consequences. The consequences being one smoking hot Victor Martinez.

Via Matthew B. Mowery of The Oakland Press:

That includes Martinez's three run shot in the 6th...after Cabrera was given a free pass. It was a marvelous at bat for Martinez. He worked an 0-2 count to 3-2, then sent Gavin Floyd's 9th pitch of the at bat deep into the night, far over the right field fence.

With tonight's victory, Verlander is 23-5 on the year, and 14-1 against the AL Central. The last time a Central team stuck an L on the Tigers' ace was back on July 15th, when these same White Sox scored five runs, four earned, in a game the Tigers lost 8-2. That's also the LAST time Verlander lost, period. He's gone 11-0 since. Yes, wins are an overrated stat...but damn, that's impressive.

Verlander didn't have his best stuff early on, thus dialing up his 100 MPH fastball sooner than we normally see. A double play got him out of a 1st inning jam, caused by some iffy infield defense from Wilson Betemit and Will Rhymes. Verlander struck out Gordan Beckham with the bases loaded in the 4th to end another threat. But Verlander cruised from there on out, retiring nine of the last ten Sox he faced, including eight in a row.

Verlander's seven shutout innings lowered his ERA to 2.36, giving him back the AL lead. The Cy Young awaits.

Delmon Young walked in the 9th, his 3rd as a Tiger. The Tigers are 3-0 when Young strolls to 1st. Patience is a virtue, Delmon!

Talk about getting beat up. Alex Avila was hit in the mask so hard on a foul tip...I swear sparks flew. Let's check a screencap... 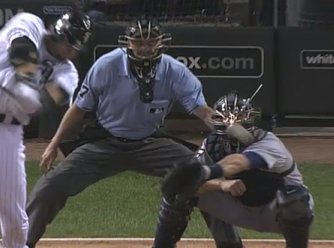 You could hear the Tigers fans in attendance all night long, overwhelming Sox fans with a raucous "LET'S GO TIGERS" chant late in the game.

Just to drive home how well the Tigers are playing...take a look at the Central standings.

With the Indians and Sox losing, the Tigers now hold the biggest divisional lead in the major leagues. I did NOT see that coming.