Share All sharing options for: Victor Martinez helps Tigers walk off with a win in 11th inning 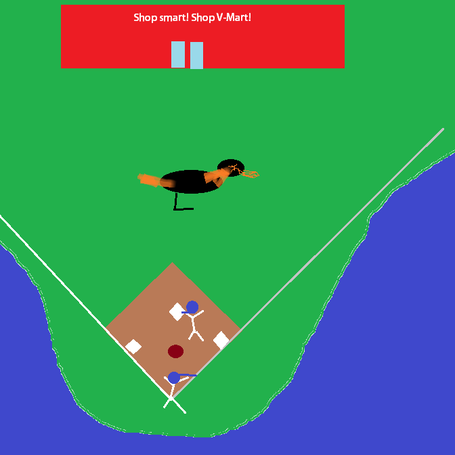 Rick Porcello: 7 innings, 3 runs allowed on nine hits and a walk. If the definition of a crafty lefty is a guy who is constantly giving up base runners without getting hurt too badly, I think we can say Porcello was a crafty righty tonight.

Victor Martinez drove in the game-winning run in the 11th. Whew. To lead off the inning, Brandon Inge walked, then Miguel Cabrera moved pinch-runner Danny Worth to second base with a single. V-Mart's two-strike hit down the line was all it took to get him home.

You can blame Jen of Old English D and Baroque for the ugly MSPaint recap above. They seemed to think I should torture you all with one of them. They would not accept "no" for an answer. So, there you have it.

Ryan Perry got the win after somehow escaping his 11th inning predicament. He allowed a double, then walked Vladimir Guerrero. Not a bad idea, really. He forced a double play on a ground ball, then escaped with a lazy grounder to Jhonny Peralta. Don Kelly isn't the only wizard, apparently Perry is a magician.

The Tigers bullpen -- Phil Coke, Joaquin Benoit, and Jose Valverde -- did really well too. Benoit struck out the side in the ninth, and Valverde got a strikeout in the 10th.

The Tigers are 3-3 since clinching. Texas is winning right now to keep pace for ALDS home field advantage.