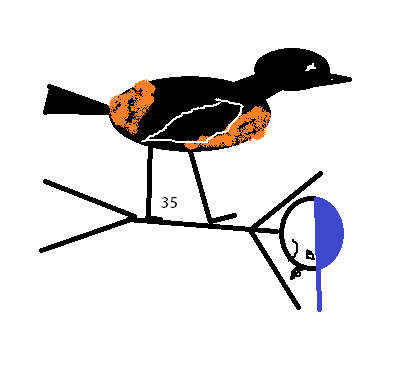 Justin Verlander gave up 5 runs in his first three innings on the mound. However, after allowing a home run to Mark Reynolds in the third (and a base runner thanks to Ryan Raburn), Verlander got through the next 12 batters without allowing a baserunner. Meanwhile the Tigers rallied to tie the game.

24: Justin Verlander fell a win shy of the nice round number "25" everyone was craving.

Two in the ninth: One, Daniel Schlereth gets a swinging strikeout, but catcher Alex Avila couldn't find the baseball. Orioles pinch runner Kyle Hudson went from first to third on the play. He then scored on a suicide squeeze by Matt Angle. That ends up the winning run.

By the way, Angle also hit his first career home run in the first inning.

Baltmore has now taken 2 of 3 games in the series. Detroit hopes to earn a split in Sunday's game.

Note you may have seen elsewhere: The last pitcher to go for his 25th win and lose was Roger Clemens. He won the AL MVP that year, 1986.

Verlander stunk early, undeniably. Maybe he got too ramped up? Hard to say. But he did settle in and look a lot more like himself after that. More stats: The last time he allowed five runs in a game was July 15 to the White Sox. The last time at least five were earned was May 24, when the Rays scored six.

The Tigers fought back well, as they always do. It was just an unfortunate series of events that led to the loss. On the bright side, the eventual game winner got on with a hit, not a walk. Progress?

Al Alburquerque had a 1-2-3 eighth inning. Jim Leyland said he'd try to get him into Sunday's game to see how he feels on back-to-back days.

The Rangers won today, so the Tigers are a game behind in the ALDS home field race.