David Pauley: 3 IP, 1 H, 0 R. Because Pauley stopped the bleeding the Tigers were given a chance to make the comeback. Easily his most important appearance in the Tigers' uniform.

4 HR: Delmon Young, Wilson Betemit, Ryan Raburn and Miguel Cabrera each hit one during the comeback. Those midseason trades are looking pretty good, no?

1 win: Luis Marte pitched a perfect ninth inning, allowing him to receive credit for the win, the first of his career.

First off, here's Miguel Cabrera's walkoff home run video. I guess it's key in that it cemented the win. (The call is boring because it's the national Fox broadcast.) 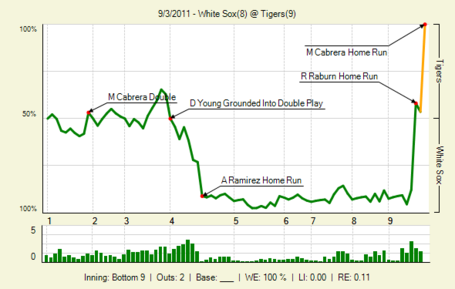 HOLY CRAP WHAT A COMEBACK!

Someone asked me on Twitter what happened. My response, in 140 characters or less?

Credit goes to pretty much everyone but Brad Penny today. The Tigers rapped out 15 hits, with nearly everyone getting involved. And the guy who didn't have a hit is the all-star catcher, so we're not going to complain about that. Penny, meanwhile, was not helped by his defense, not helped by the umpires, and not helped by himself.

Great decision by Jim Leyland to pinch hit Ryan Raburn, as he hit the game-tying home run in the ninth. Great game by Austin Jackson. He had two triples and four hits.

It's not the biggest comeback at Comerica Park. It may not even be the most historically meaningful. In the final series of 2003, Detroit trailed the Twins 8-0 en route to loss 120. They scored the next nine runs to win 9-8, then won the final game of the year to avoid complete infamy.

But coming back from an 8-1 deficit today against the White Sox, who might have been Detroit's biggest competitor for the division title, is simply incredible. Chicago saw two games in the standings evaporate in a matter of minutes and now has to make up 7.5 games with 26 to go. Theoretically not impossible, but ...

Well let's just say the magic number is acceptably close for me to acknowledge the existence of the magic number. Still it seems a bit premature to talk it up too much. And let's just say the scoreboard watching at this point should be less about the Cleveland Indians and more about the Texas Rangers, because Detroit is just 1 1/2 games out of having home field in the ALDS.