Tigers score 18 runs, all but knock White Sox out of the division hunt

Share All sharing options for: Tigers score 18 runs, all but knock White Sox out of the division hunt

Going back to Saturday's game, the Tigers scored 26 unanswered runs against the White Sox.

"Play ball" shouted before the game.

What can you really say about a game like this? Besides, "Man, that was awesome." (I may have used different words that cannot be printed on the front page of this website.) I don't think anyone could even have began to script out this weekend's series. First a seven-run comeback, then an 18-0 lead on Sunday? Holy moly. Detroit's lead over Chicago has been extended to 8 1/2 games. (Yeah that's pretty much it for them but I didn't want to jinx it.) It remained 6 1/2 over the Indians, who'll be hosting the Tigers the next three days.

So everyone in the starting lineup got a hit. All of them but one got multiple hits. Brandon Inge had three hits. Inge. Three hits. Barely computes. Of course it all started off with an Austin Jackson double in the bottom of the first inning. The Tigers scored in interesting fashion: 1 run, then 3 runs, then 5 runs, then 7 runs. Only two runs in the eighth inning snapped the pattern.

Meanwhile you knew when Max Scherzer got through the first inning in 1-2-3 fashion it was going to be a good day. When he went 1-2-3 in the third inning with three strikeouts you knew it might be a great day. He actually faced the minimum number of batters through the first four innings, though one of those batters got on with a single before being caught stealing.

Anyway it was a blow out, I'm not going to get real analytical on you here. Big win. Another team basically knocked out of the division hunt. Fun times. 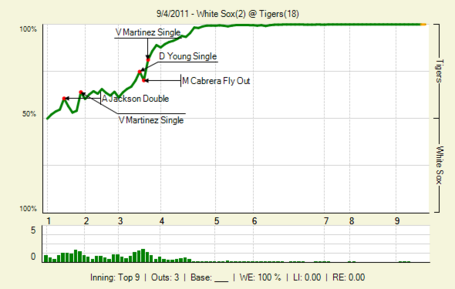