10. By the way, the Tigers and Phillies are tied at 10 for the lowest magic number in the MLB.

8 unanswered runs scored by the Tigers after Brad Penny falls behind 4-0 in the first.

Among several keys, Alex Avila's 3-run home run in the second inning stands out. It got the Tigers back into the game after they trailed by four. Wilson Betemit's triple tied the game at 4-4 in the fourth.

I'll list Ramon Santiago's and Delmon Young's home runs as well to remind you Detroit hit three in a game. Use that info to your advantage if you can. Santiago's accounted for the game-winning runs.

I don't think I can say Holy Cow often enough with this team. Or any other kind of holy, to be honest. I mean, at this point you're almost waiting for a loss. More than once the team has fallen behind pretty good and you think, This is finally the game they lose. Yet the batters find their giddyup and the next thing you know Detroit's leading. You can't explain it other than to thank the baseball gods and credit everything for going right at the right time.

Brad Penny started off pretty awful, you can't deny. For awhile you wondered how he'd make it out of the first inning as the Twins pushed the lead to 4-0 before the Tigers even batted. The second inning didn't start off much better for him when the first two Twins batters reached base. Then a funny thing happened. An out. Then a double play. Then a three-batter third. Then a 1-2-3 fourth and a 1-2-3 fifth. Before you knew it, Penny had 12 outs in 11 batters and made it through five innings. Where was that Penny in the first inning? Who knows. But he bared down and gave his team a chance to come back. Commendable. That helped Brad Penny reach the 10 win mark on the year.

Bonus info: Neither Daniel Schlereth nor Ryan Perry walked anyone in a combined 2 innings on the mound!

Tigers are on the Fox Saturday game tomorrow. I'll be enjoying an afternoon with the puppy and his littermates for a 6-months-old reunion, but Al will be your host.

I love it when the chart does an about-face like that. So you know I have to post. 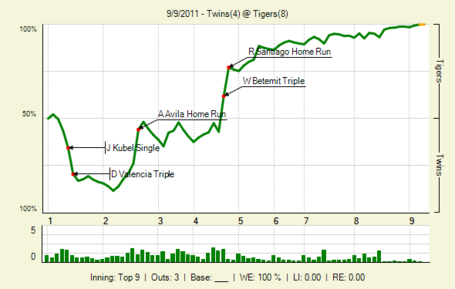