The Detroit Tigers clinched the Central Division title as Miguel Cabrera charged toward the first Triple Crown in 45 years in a 6-3 victory over the Kansas City Royals.

The Detroit Tigers clinched the American League Central Division title with a 6-3 victory over the Kansas City Royals. The Tigers make the post season in consecutive years for the first time since 1934-35.

Rick Porcello pitched into the 6th inning for the Tigers, allowing 1 run on 4 hits, winning his first game since August 7th. Jose Valverde tossed a scoreless 9th for his 35th save. Royals' starter Bruce Chen was tagged for 10 hits and all 6 Tigers runs, taking the loss.

Miguel Cabrera took a stranglehold on the AL Triple Crown with 4 hits, including his 44th home run and 137th RBI. Prince Fielder chipped in with 4 hits, Jhonny Peralta also homering. Tigers' backup catcher Gerald Laird had the big hit of the game, a 6th inning 3 RBI double. Alex Gordon went deep for his 14th home run of the season, accounting for the sole Royals' run.

As Bruce "Cy" Chen throws the first pitch at 8:10 Detroit time, the White Sox and Indians are scoreless in the 4th. 12 pitches later, so are the Tigers against Chen.

The Royals have the first base runner of the game with 1 out in the bottom of the 1st, the oddly named Irving Falu lining a hard single to right off Rick Porcello. 2 down and Tiger Killer Billy Butler at the plate, Falu stole 2nd. Gerald Laird's throw bounced into center, Falu motored to 3rd.

But before any cries of "Crap, here we go..." could be heard, Butler lined to Avisail Garcia for out number 3.

The Pale Hose and Tribe still scoreless after 5, Prince Fielder beat the shift by lining a single off the glove of Alcides Escobar. Unfortunately, Delmon Young pulled his patented "pull an outside pitch to left side for a tailor-made 6-4-3 double play" trick. Slumping Jhonny Peralta continued slumping, flying out to end the 2nd inning.

Mr. Three True Outcomes, Adam Dunn, had a 4th outcome, singling in the 6th to give the White Sox a 1-0 lead. EVERYBODY PANIC!

Porcello gets a ground ball off the bat of lead off man Salvador Perez, but the ball scoots past Omar Infante for a single. Perez takes 2nd when Laird can't find Porcello's pitch in the dirt. As if to say, "What the Hell?" about his defense, Porcello walks Mike Moustakas.

Porcello got a big out when Jeff Francoeur, in the running for "Worst MLB Player 2012", popped up to Infante. Porcello actually gets some defense played behind him when David Lough grounds into a 4-6-3 double play...barely. 2nd inning over, game still scoreless.

The White Sox, doing their damnedest to not flat-line, take a 4-0 lead over the Indians in the 6th.

1 out in the 4th, Escobar throws out Infante from DEEP short, robbing him of a single. Slumping Jhonny Peralta sheds a tear. Miguel Cabrera singled with 2 down, but Chen being Chen, got Fielder on a can of corn to left.

Cabrera robs Tiger Killer Billy Butler of a single in the bottom of the 4th, making a lunging stop and accurate throw. Don't forget Cabrera still is a God awful defensive player, because the media says so. The next 2 Royals pound the ball into the turf to end the 4th, Porcello having retired 8 in a row.

The game moved into the 5th a scoreless tie.

Top of the 5th, while fans count the days until he becomes a free agent, Young strikes out looking. 1 out, fans counting the days until Slumping Jhonny Peralta starts hitting, stopped counting when Peralta yanked a Chen breaking ball over the wall the left, his 13th home run giving the Tigers a 1-0 lead. RUNS!

Andy Dirks singled up the middle, the Tigers showing signs of life against Cy Chen. It really looked like the Tigers had something going when Garcia singled to left. But Dirks, who knows why, decided to run on a ball hit in front of him, let alone on Alex Gordon. Dirks was out by several necks. Small consolation, but an alert Garcia advanced to 2nd.

Dirks' mistake would cost the Tigers. Laird nubbed an infield single for the Tigers 4th straight hit, Garcia taking 3rd. Chen got out of the inning with a bare minimum of damage when Austin Jackson lined out to center.

As the Tigers lead the Royals 1-0 in the bottom of the 5th, the White Sox hold on to their 4-0 lead in Cleveland.

Lough singled with 2 down in the 5th, ending Porcello's streak of 10 consecutive outs. Falu fell behind in the count 1-2, then worked a 9 pitch walk, the Royals' kicking up their heels.

At the same time, the White Sox score in the top of the 8th, extending their lead to 5-0.

Porcello, losing whatever mojo he had over the Royals, walked Jarrod Dyson on 5 pitches, loading the bases. Al Alburquerque immediately started warming up in the pen as Porcello faced Escobar.

Porcello gets the ground ball he wanted on an 0-2 pitch, but it was headed to center. Infante saved 2 runs with a backhand grab, flipping the ball from his glove to Peralta's for the force, threat over.

Defense, what a concept!

1 out in the 6th, Chen tried to sneak an outside fastball past Cabrera. Not happening. Going with the pitch, Cabrera rocketed a liner over the wall in right for his 44th home run and a 2-0 Tigers lead. The solo shot meant Cabrera now held sole possession of the Triple Crown categories.

Cabrera's running mate followed with a line shot to center. Lough dived...and came up empty, Fielder chugging into 2nd with a 2 base hit.

2 down, Lough misjudged Slumping Jhonny Perlata's sharply hit liner, dropping it for a 2 base error, Fielder rumbling home to make it a 3-0 game. "Lough" could be considered a 4 letter word in Chicago.

Dirk singled to right, Frenchy throwing home when he should have realized there was no way in Hell Gene Lamont would send Slumping Jhonny Peralta home on his arm. Dirks never stopped running, and beat Perez's throw to 2nd.

Chen fell behind Laird 3-1 and was forced to go after Laird with a fastball. An 85 MPH fastball.

Laird laced Chen's letter high meatball into the left field corner for a bases clearing, 3 RBI double. G Money was money, breaking the game wide open.The Tigers had hung a 5 spot on the Royals, extending their lead to 6-0.

Given a big cushion, Leyland allowed Porcello to start the 6th...likely on a short leash. It turned out to be a very short leash, Gordon drilling Porcello's low 90's, 3-2 fastball deep into the right field seats. Out of patience with his 5th starter, Jim Leyland quickly made the call for Alburquerque.

There was a problem, though. Alburquerque had no command. The first batter he faced, Tiger Killer Billy Butler, doubled off the wall in dead center. Then it got ugly. Alburquerque, either bouncing his slider into the dirt or wild high, walked both Perez and Moustakas.

The bases loaded, no one out, 1 run already on the board, Alburquerque was in deep. But Frenchy bailed him out, grounding into a nicely turned 6-4-3 double play. A run scored on the GIDP, but it was a trade the Tigers were happy to make.

Alburquerque mercifully ended an excruciating to watch inning by striking out Lough on a 2-2 slider. Thank freaking God.

While the Porcello and Alburquerque were causing Tigers fans to pull what was left of their hair out, the White Sox were hanging a 6 9th inning runs on the Indians, beating the Tribe 11-0. Statement made, but would it be enough?

The Tigers threatened, but did not score in the 7th. Cabrera blooped his 3rd hit of the night into right with 1 out. Fielder blooped a ball to center just in front of a diving Lough. But the threat died an inglorious death, Young and Peralta striking out swinging.

On the mound in the bottom of the 7th for the Tigers was the old man of the bull pen, Octavio Dotel. Infante, having a great game with the glove, stole a single from Falu with a backhand grab and off balance throw. It was cake from then on for Dotel, setting the next 2 Royals down in order.

The Tigers went down in order in the 8th, the lead remaining 6-2. Leyland went by his bullpen bible, meaning Joaquin Benoit would pitch the bottom of the 8th.

Gordon looped a lead off single to right, bringing up Tiger Killer Billy Butler and memories of last week in Detroit. Benoit threw a fastball by him for strike 3. 5 outs left.

Perez fell behind in the count 0-2, worked it to 2-2, then just stuck his bat out to drop a single in front of Jackson. Gordon advanced to 3rd. Still 5 outs left.

Benoit fell behind Moustakas 3-0. EVERYBODY PANI...No! Benoit fought back to strike out Moustakas on a 3-2 fastball. 4 outs left.

Francoeur laced a 1-0 fastball to Jackson in left center, Gordon scoring, Perez taking 3rd, EVERYBODY PANI....NO! Frenchy, doing his damnedest to earn the title "Worst MLB Player 2012" ran into the 3rd out trying to stretch his single into a double. Jackson had him dead to rights, Frenchy bailing out Benoit. 3 outs left.

The Royals went with reliever Vin Mazzaro in the 9th. Getting the first 2 outs easily, Cabrera bounced a single to center, his 4th hit of the game. Exit one Vin Mazzaro.

Channeling his inner Robin Ventura, Yost went to the pen. Enter Tommy Hottovy. Fielder ripped a single (though it could have been easily called E-6) off the glove of Escobar, Cabrera taking 2nd.

9th inning, the Tigers up 6-3, 3 outs away from a division title. You know what that meant.

Jose Valverde took the mound looking for his 35th save and a division title.

Falu bunted for a base hit, Potato's sidearm throw hitting him in the back. Still 2 outs left. I'd like to think Papa Grande drilled Falu on general principle.

Brayan Pena pinch hit for Dyson. He popped up an 0-2 pitch, Cabrera clutching the ball in foul territory. 1 out left.

Escobar, the Royals' final hope, pounded a low in the zone mid-90's Poatato fastball into the dirt. Peralta scooping it up, his throw nipping Escobar.

Bullets are brought to you by a giant, bearded leprechaun. 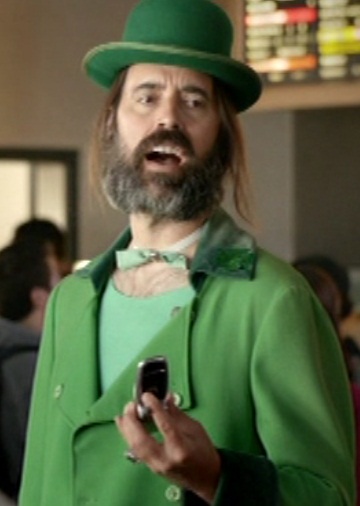 The Triple Crown is well within Cabrera's grasp. His hands are on the crown, it's just a matter of holding on for 2 more games. 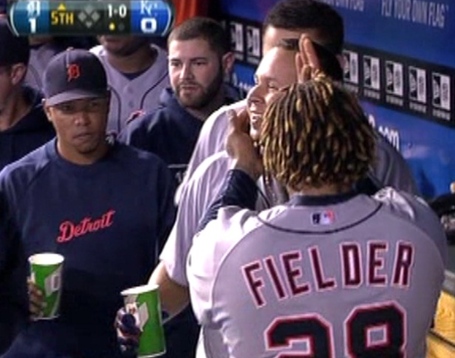 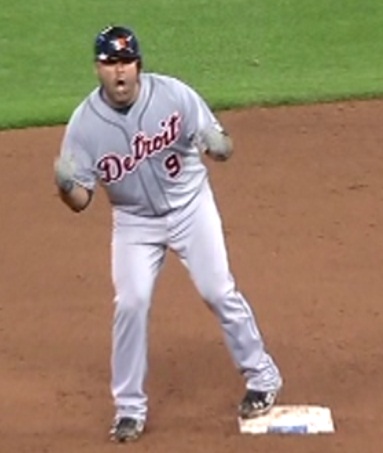 That's not Pepsi heading to the Tigers' clubhouse... 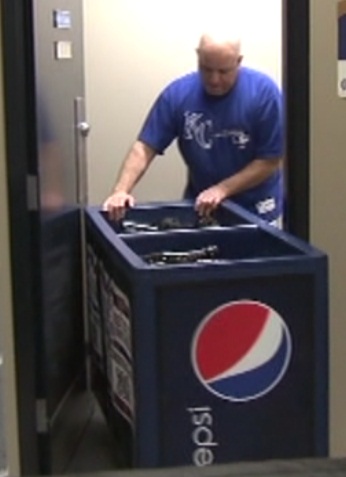 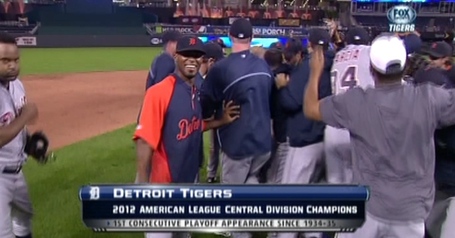 Miguel Cabrera: May have locked up the first Triple Crown in 45 years with a 4-5 performance.

Prince Fielder: It's quite fitting Cabrera's partner in crime also had a 4-5 night in the division clincher.

Rick Porcello: I'll take 5 innings and just 1 run allowed from Porcello every damn time. Kid Rick got his first W in what feels like months.

Omar Infante: This was the defensive 2nd baseman I expected see after the deadline trade. Glad to see him finally show up.

Delmon Young: 0-4, 2 strikeouts. I'm counting the days till Young becomes a free agent so he can frustrate another fan base to high Hell

Al Alburquerque: A hiss for scaring the bejabbers out of me in the 6th. To his credit, he pitched out of a massive jam...but Jebus, throw strikes!

Due to my browser crashing, PotG voting never went live as part of the recap. So let's just call it a tie between Anibal Sanchez and Prince Fielder, shall we? Good!