Athletics stave off elimination, shutting out a listless Tigers' offense in a 2-0 ALDS game 3 victory.

4 Oakland Athletics pitchers combined to shut out the Detroit Tigers 2-0 in game 3 of the ALDS, staving off elimination. The Tigers still hold a 2-1 lead in the 5 game series. Game 3 is scheduled for 9:37 PM Wednesday.

Despite not having pitched since injuring himself against the Tigers on Sept. 19th, Anderson looked sharp to start the game. Not helping was Austin Jackson, Omar Infante and Miguel Cabrera aggressively attacking Anderson's slider, resulting in 8 pitches, 2 swinging strikeouts and a 4-3 ground ball.

Coco Crisp singled through the right side, Sanchez walked Stephen Drew to immediately get himself in trouble. Trouble came when Cespedes grounded an RBI single up the middle, A's up 1-0.

Sanchez calmed down from that point, striking out Moss, and getting the infuriated over the "Kiss" Josh Reddick to ground into a nicely turned 4-6-3 double play. Considering the first 3 batters reached base and was also a little unlucky (2 ground balls finding the outfield), Sanchez did well to pitch out of the jam allowing only the 1 run.

Unfortunately, luck wasn't going the Tigers' way. Prince Fielder ripped a liner to right center with home run distance, but Crisp's leaping catch kept the ball inside the park. Instead of a 1-1 tie, it was just a loud out.

But Fielder showed someone on the Tigers could hit Anderson hard. So Delmon Young and Jhonny Peralta followed with singles. Andy Dirks put a crimp in any possible rally by hitting into a 4-6 fielder's choice, leaving it up to Avisail Garcia to bring the runner home from 3rd with 2 outs. Didn't happen for the rookie, he was overwhelmed at the plate, hitting a come-backer to Anderson, ending the threat.

Josh Donaldson led off the 2nd with a line single to left, keeping the raucous A's crowd in the game. Driks with a nice running catch on a ball hit directly over his head to deep left off the bat of Seth Smith for the 1st out. Donaldson went for the take out slide after Cabrera went to 2nd on Derek Norris' slow roller, making sure the Tigers wouldn't turn 2. There was no way it was going to happen, but it made for nice pictures on TBS,

The A's proceeded to run themselves out of the inning when Gerald Laird threw out Norris trying to steal. The A's didn't score in the 2nd. Maybe the ALDS wasn't over after all!

Laird struck out out open the 3rd. There was some confusion if Laird had been called out while checking his swing. Not realizing it was strike 3, Laird didn't take off for1st as the pitch bounced away. By the time he realized it was strike 3 and took off, he was nipped by the throw. Bah...

Jackson walked on 5 pitches, but was erased on a 5-4-3 double play. Infante hit the ball square, but directly at Donaldson, who was stationed next to the base line like it was late in the game. Inning over, Tigers still trailed 1-0.

Sanchez settled in after a rough 1st inning, the A's going down in order in the bottom of th3rd. Anderson countered with a 1-2-3 top of the 4th, helped by Cabrera's one-hopper rocketed directly at Drew. The Tigers were hitting the ball hard, but right at defenders...and of course, Crisp taking away a run.

Sanchez continued dealing, tossing another 1-2-3 inning, including a fly out from the always infuriated by kisses Reddick to end the 4th.

Peralta led off the 5th by drawing a walk, but Dirks went chasing for a slider which was closer to East Oakland than the plate, striking out. Gracia out ran a double play ball to short, keeping the inning alive as Peralta was the 2nd out. Laird's come-backer ended the inning.

1 down in the bottom of the 5th, after 9 consecutive A's had taken a seat, Smith made it a 2-0 game by jacking Sanchez's 93 MPH fastball over the 400 mark in center, the solo home run giving the A's a 2-0 lead. For what it's worth, Jackson probably runs that ball down at Comerica. What parks giveth, they also taketh away.

Sanchez avoided further trouble, ending the 5th down 2-0. Yet it wouldn't matter how well Sanchez pitched if the Tigers' bats remained sleeping in the the bay along with any escapees from Alcatraz.

It was the top of the order for the Tigers to start the 6th. 3 up, 3 down, the Tigers swinging on top of Anderson's slider over and over and over. Culprits included Infante and Cabrera, both of whom struck out to end the 6th. The Tigers were getting a heavy dose of Al Alburquerque style medicine.

Going in to the bottom of 6th, Sanchez's pitch count was at 87, Octavio Dotel and Drew Smyly were up in the bullpen. There was no need, Sanchez tossing a 9 pitch 1-2-3 inning.

Anderson was done after 6, the A's going by their bullpen book, starting with Ryan Cook. Fielder was robbed of a 2nd hit, Cespedes leaving his feet to make a diving catch for the 1st out of the 7th. Another sign luck was not on the Tigers' side tonight.

After Young struck out swinging on a low and outside breaking ball closer to LA than the strike zone, Perlalta singled, his 2nd hit of the night. Quintin Berry prepared to pinch hit for Garcia if the Tigers rallied, but he never made it to the plate. Dirks flew out to end another frustrating inning.

Sanchez started the bottom of the 7th, but was also nearing 100 pitches, which is when he normally tires. Tonight was no different. Reddick hit a line smash to Peralta for a loud out. After Sanchez allowed a single to Donaldson, his night was over, Jim Leyland bounding out of the dugout.

The left-hand hitting Smith due up, Leyland went with the playoff tested right-hander, Dotel, instead of the lefty rookie, Smyly. Dotel did his job. Smith fouled out to Cabrera on a ball that lands in the stands in every other MLB stadium. You know, that giveth, thaketh thing again. Dotel struck out Norris, sending the game into the 8th.

A's manager Bob Melvin going by bullpen muscle memory at this point, he started the 8th with hard throwing lefty Sean Doolittle on the mound. Unlike Sunday, Doolittle was on his game, striking out the side, Garcia, Laird and Jackson.

Despite a right handed bat in Pennington leading off, Phil Coke took over for Dotel. The glorified LOOGY got Pennington on a pop up to short center, the Tigers narrowly avoiding disaster as Jackson and Infante nearly collided, Infante holding on for the out.

Coke got Crisp on a can of corn, but walked the left-hand hitting Drew. Right-hand hitting Cespedes was due up next, bringing out Leyland for a pitching change.

A move was warranted. But who would it be? Joaquin Benoit? Al Alburquerque? Don Kelly?

Surprisingly, the demoted to the bullpen 5th starter came out of the pen to face Cespedes. The move worked...BRILLIANTLY. Porcello needed just 1 pitch to retire Cespedes on a pop up.

On to the 9th and the Tigers' last gasp at ending the series in 3 games.

Infante struck out on a 96 MPH fastball.

The Tigers desperately needing a base runner, Cabrera, doing what he does best, went with an outside fastball, singling to right. The Triple Crown winner had set the table for the tough luck Fielder, the tying run at the plate.

There would be no game-tying home runs or a series sweep tonight. Fielder bounced into an easy game ending 6-3 double play.

No need to panic. The A's played like their season was on the line. Well, it was. If they were going to win a game, this was it. First game back home, needed to win 3, backs against the wall, I'm not at all surprised the Tigers lost.

And give credit where credit is due, Anderson is really damn good. Sometime the other guy just plain beats you.

But the A's also used up their ace to keep the series alive, and will roll with rookie starters from here on out. The Tigers will counter with a pair of studs, Max Scherzer and if needed, the best pitcher in the league MLB USA North America Western Hemisphere planet solar system universe, Justin Verlander.

I really like the Tigers' chances to win this series, even if they weren't able to accomplish the sweep I predicted. No reason to lose sleep...not yet, anyway.

Bullets are brought to you by the upper deck tarps at the O.co.

Refugees from Raiders Nation, I assume... 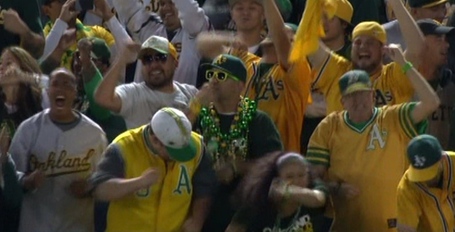 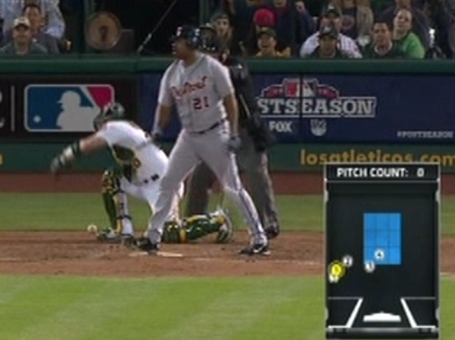 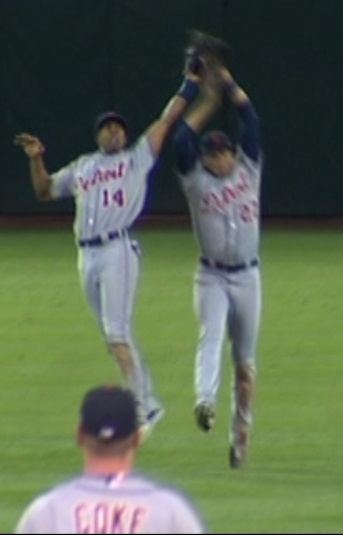 Phil Coke: He was OK, which is awesome considering his recent struggles. And we got a finger point.

Rick Porcello: 1 pitch, 1 out. How long before the cries of "Porcello for closer" start?

The offense: We've already learned 4 hits won't win in the regular season, no reason to expect things to change in the playoffs, right?

ALDS GAME 2 PLAYER OF THE GAME:

The box score may say Don Kelly, like Moonlight Graham, didn't make a plate appearance. But Kelly scored the game-tying run and knocked in the winning run with a walk off sacrifice fly, which gave the Wizard his first PotG honors. Donnie Baseball couldn't have picked a better time for his PoitG breakthrough.