Closer-by-committee is nothing new for a couple of former St. Louis Cardinals. SB Nation's Amy K. Nelson tells how Gerald Laird and Octavio Dotel saw this story in 2011 and yet have the World Series rings to show for it.

Share All sharing options for: Closer by committee no big deal to a couple of World Series champions

Republished from Baseball Nation. Some of you might not realize that we've got a wonderful baseball site at SB Nation, which features ESPN vets Rob Neyer and Amy K. Nelson. Amy's been following this playoff series from Yankee Stadium and provided this commentary. - Kurt

NEW YORK -- Earlier this season when Gerald Laird and Octavio Dotel would board the Detroit Tigers' charter flights, they'd go to the back, set up their poker games, and commence trash talking. It was nothing out of the ordinary, until, that is, Dotel and Laird took it to another level: donning their shiny, mammoth World Series rings for all to see.

The batterymates wanted every man on that plane to see the rubies sparkle, to see the diamonds encrusted (plus rally squirrel), to see the ultimate prize. Quite simply: they wanted to remind everyone that they won it all with the Cardinals last year, and that it should be the same goal for this Tigers team.

They did it, of course, with humor, but the message was clear.

"Maybe," Laird said, it will give "them a little more incentive to see how it is to have a ring."

After two games in the Bronx, the Tigers are that much closer. They beat the New York Yankees on Sunday 3-0, and now head home up 2-0 in the American League Championship Series with an off day before Justin Verlander takes the mound, at home, for Game 3. And they've been doing it with their bullpen in disarray. Jose Valverde, their closer, is currently on sabbatical after blowing a 4-0 lead in Game 1 and struggling in the first round against Oakland, netting him a 27.00 ERA this postseason. All of this culminated with manager Jim Leyland pulling Valverde from the closer's role for Game 2.

"You can't pitch with 10 pitchers in the postseason so Jose Valverde will be a very important part of this postseason," Leyland said. "If he's not, it's going to be tougher for us." 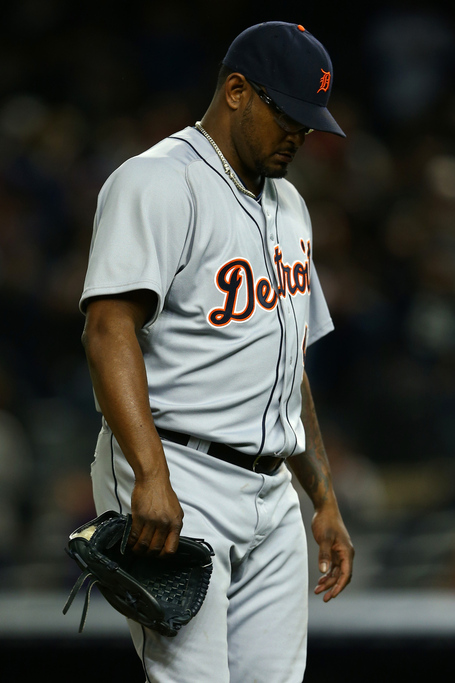 Jose Valverde has a 27.00 ERA this postseason, via Getty Images

Valverde hasn't been the only one; setup man Joaquin Benoit, too, has struggled -- especially late in the season -- and has given up at least a hit in all four appearances this October, including a blown save against Oakland. And yet, no one in the Tigers clubhouse seems to be all that worried about it. Perhaps the collective calm is rooted in the stellar success of the Tigers' starting pitching. Both Doug Fister and Anibal Sanchez have held the Yankees scoreless in these first two games. In fact, aside from Valverde's implosion, the Tigers have blanked New York hitters in 20 of 21 innings this series, and the starters this postseason have not allowed a run in four straight games, spanning 29 innings. Yet because we usually tend to remember extremes, most of the focus has been on Leyland's suspect bullpen, his suspect closer and how the Tigers will overcome it.

"Our guys have done an unbelievable job," catcher Alex Avila said. "You're not going to get away with many mistakes and we just haven't had many mistakes, other than the ninth inning. They've just been doing a great job all postseason and they just continue to do it."

As for Valverde, he had a side session before Sunday's game and after it said he was working on a hitch with his left leg in his delivery; that video showed he was slowing it down too much. He thinks he's fixed it and while he said it doesn't matter who the closer is, he still wants the job. In the end, though, Valverde stressed, "I want to win, and have my team go to the World Series."

Leyland told reporters on Sunday that Valverde's reprieve was for Game 2 only, but after the win Tigers general manager Dave Dombrowski left open the possibility that it won't be an automatic Valverde returns to his role.

"Papa Grande has done a great job for us," Dombrowski said, he's "scuffled a little bit over a recent time period and we thought, Give him a break, let's see if we can fix something in his delivery and mix-and-match for now.

"I wouldn't be surprised if [Leyland] goes back to him at some point," he said.

That is pretty wide open, and on Monday afternoon Leyland told reporters that, "we're just gonna play it out and see what happens. I’m hoping that Valverde in the very near future is ready to take it back over."

For Dotel and Laird in particular, the predicament reminds them, in a sense, of last year's Cardinals team. Tony La Russa was mixing and matching until the end of the season, when Jason Motte settled in as closer, yet La Russa refused to ever label him such. Everyone in the Cards' pen expected they could be called upon at any time.

Now, with Valverde's issues, the same seems to be taking shape for the Tigers.

"It does remind me, I'm not going to lie to you," Dotel said. "We kind of have a similar bullpen compared to the last year." 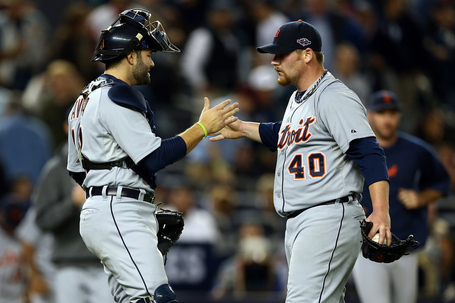 Phil Coke got the save against New York in Game 2, via Getty Images

On Sunday, it was lefty Phil Coke who worked the eighth and ninth, staying in against righties Russell Martin and Alex Rodriguez in the ninth to get the save. Coke, who said it's difficult for him to not get crazy amped, harnessed his aggressiveness while locating his fastball. It also helped that it came against the Yankees, the team that drafted him and then traded him three years ago in the Curtis Granderson deal.

Coke was quick to point out that the mixing and matching - if that is how Leyland will proceed - should not be an issue because of the experience most of the relievers have, the exceptions being Al Alburquerque and rookie Drew Smyly.

"Benoit, Valverde, myself and Dotel all have closing experience," Coke said. "Our job is to pick up our teammates no matter what the situation is, that's why I try to do at every chance."

And that's why Coke also took the time to bring his World Series ring with him on this trip. He netted his with the Yankees in 2009, before they shipped him and outfielder Austin Jackson to Detroit in a three-team trade that netted Granderson. So on the charter down to New York a few days ago, it was Coke's turn to break out his, only showing the rookies, and telling them, 'This is what you play for. This right here.' Coke wanted to give inspiration, wanted to let them know there is more ahead, more left to do.

While Laird and Dotel said it was all in good fun -- and unlike Coke, they did it at the beginning of the season; both of their respective rings are now locked away in a safe place -- they too, were sending a message. Dotel said he and Laird try and pump up their teammates in the clubhouse before games, telling them how emotional this time is, that it was just like this for them last season in St. Louis.

"We're trying to give them the same idea, the same feeling we had last year," Dotel said.

Laird knew a lot of his current teammates nearly made the World Series last year, eventually losing to the Rangers in six games. He sensed a want, a desire.

"They were so close last year and they're hungry," Laird said. "And maybe if they see us wearing a ring and they'll want their own.

"We definitely want another one."

As Coke was finishing getting dressed to leave for the trip back to Detroit, Game 1 between the Cardinals and Giants was just underway in San Francisco. The 30-year-old reliever looked up at the television and saw the screen flash to Cardinals left fielder Matt Holliday.

"Look at the patch on Holliday's shoulder right now," Coke said, and nodded up at the TV. "It says World Series champs. Right there. Tell me there ain't no pride there -- there's a lot of pride there and there should be, you earned it."

Amy K. Nelson is a Senior Correspondent for SB Nation and host of Full Nelson. You can follow her on Twitter @AmyKNelson or e-mail her here.