The Triple Crown is well within Miguel Cabrera's reach as the Royals knock off the Tigers' B-team.

The Kansas City Royals beat the Detroit Tigers' reserves 4-2. While the game meant nothing in the standings, it did go a long way toward Miguel Cabrera winning the Triple Crown. Cabrera had a pair of singles in 3 at bats, along with 2 RBI. With 1 game left to play, Cabrera leads the AL in batting, home runs and RBI, and finds himself on the verge of MLB's first Triple Crown season since 1967.

Alcides Escobar led the Royals' offense with 3 hits, including his 5th home run, and 2 RBI. Jeff Francoeur also went deep for the Royals.

The Tigers started what was coined their "Hangover lineup" by BYB editor Rob Rogacki in the game thread. The hangover replacements batting 1 and 2, Qunitin Berry and Ramon Santiago, flew out and struck out, respectively. Cabrera, continuing his assault on the record books, singled. But Prince Fielder flew out to deep left center.

The hangover feeling surrounding this game lingered in the bottom of the inning. Escobar took Fister deep to left, the Royals taking a 1-0 lead on the solo big fly. Hangover 1, Tigers 0.

Before the game, Jim Leyland said Fister would only pitch 5 innings, 6 if the pitch count was low. Fister was going to get his 5 innings worth and then some, needing 24 pitches to get out of the 1st.

Alex Avila walked with 1 out in the 2nd. Brennan Boesch, not making a case for being included on the post-season roster, grounded into an easy 4-6-3 double play.

The Royals threatened in the 2nd, but much like a bad pickup artist, did not score. The Tigers fan's best friend yesterday, Francoeur, led off with a single. 1 out later, Fister hit Tony Abreu with a pitch. After the runners advanced to 2nd and 3rd on a ground out, vacuum cleaner heir Jarrod Dyson struck out swinging.

The Tigers kicked up their paws in the 3rd. Don Kelly hit the ball hard, but Frenchy made a leaping catch in right. Toledo's favorite son, Danny Worth, walked. ThunderClap followed by slapping a single to left, as did Razor Ramon, loading the bases for...guess who?

That meaningless Triple Crown thing the sabermatricians like to dismiss? Cabrera wants it. BAD. He swung at Gurthrie's first pitch, lining a single to center. Worth scoring easily, Berry crossing the plate without a slide when Dyson's throw was far off line.

Fielder walked to reload the bases. But Young and Fielder combined to end the inning in ugly fashion. Young hit a pop up to 2nd base. For some reason (hangover?), Fielder took off on the swing, and was easily doubled off 1st base. Despite running themselves out of the inning, the Tigers had themselves a 2-1 lead.

1 down in the bottom of the 3rd, Alex Gordon nearly took off Fister's head with a broken bat line drive single. After removing my heart from my mouth, the recap continues. Tiger Killer Billy Butler also went back up the middle, nearly taking off Fister's legs with a hard single. After Fister removed his heart from his mouth, he got a double play ball off the bat of Salvador Perez, ending the inning.

2 out in the 4th, Kelly, picking up where he did last October (Mr. October?), hit a screaming single to right. Guthrie balked the Wizard into scoring position. But Worth, remembering he's a 4A player who could by playing in his final 2 games as a Tiger, popped up to end the inning.

Tired of messing around, Fister busted through the 4th in fine fashion, setting the Royals down in order. Guthrie did the same in the bottom of the inning, capped by Frenchy's nice running catch on Cabrera's bid for an extra base hit.

Irving Falu singled to lead off the 5th. Dyson hit a ground ball to the right of Santiago, which he waved at, putting runners at the corners. Escobar followed with the Royals' 3rd consecutive single to plate Falu, a 10 hopper through the left side, tying the game. It was the proverbial death by paper cuts.

Fister induced Gordon to pop up for the 1st out.

Luke Putkonen took over, and got just what the doctor (and Fister) ordered, a double play ball. Worth handled it easily, pitched to Santiago...who proceeded to double clutch on the relay, his throw too late to to get Perez.. Santiago turned what should have been an inning ending double play into a run score fielder's choice.

Putkonen got an ground ball off the bat of Frenchy, and this time Santiago made the play to end the inning. Unfortunately, the inability to turn to the double cost the Tigers the lead, the Royals now up 3-2.

Leading off the 6th, Fielder was safe on Falu's throwing error. Avisail Garcia replaced the big man as a pinch runner.

Young and Avila followed by hitting Guthrie pitches dead nuts square, but direct at defenders for outs 1 and 2. Boesch ended the inning in a Boesch-ian way, waving at an inside breaking ball. Boesch broke the Boesch-O-Meter on that at bat.

Substituting liberally, Bryan Holaday took over from Avila, donning the tools of ignorance. Putkonen cruised through the 6th, sending the Royals down in order.

Guthrie was puled for Francisley Bueno (yes, that's his name). Mr. October led off, and drilled a liner to deep center, but it was flagged down by Dyson. Worth singled, but was eliminated when Berry hit into a fielder's choice. It should have been a GIDP, but Tiger Killer Billy Butler showed by he is normally a DH, whiffing on the relay. But Santiago, having a brutal night, grounded out to Falu, inning over.

Darin Downs replaced Putkonen for the bottom of the 7th and immediately found himself in a jam. After Dyson struck out, Escobar singled, then stole 2nd. 1st base now open, Gordon walked. Tiger Killer Billy Butler smashed a line drive to left, but right at Garcia for the 2nd out. But Garcia, being the rookie he is, threw wildly behind Escobar, Kelly running the throw down before anyone advanced. Downs pitched out of trouble on a Perez fly out.

The parade of pitchers continued unabated, Kelven Herrera starting the 8th. Escobar robbed Garcia of a base hit with 1 down. The young Royals' shortstop went deep into the hole, firing a leaping, accurate throw to nip the speedy Garcia.

Brayan Villarreal was the 4th Tigers pitcher of the night. A day late and a career short, Frenchy greeted Villarreal by launching a 98 MPH fastball well over the Budweiser sign in left center. Francoeur's 16th big fly gave the Royals an insurance run and a 4-2 lead.

Holland entered the game, facing the Tigers' 6-7-8 hitters, looking for the save. Escobar, having put on a show all evening long, took away a single from Holoday with a diving stop. Boesch, hitting his 3rd weak ground ball of the night, was sent packing by, of course, Escobar.

The Royals finally figured out Mr. October, striking out Kelly to end this meaningless baseball game...well, meaningless once Cabrera was pulled.

1 game left to play, the post-season is on the horizon.

Bullets are brought to you by Wonderboy. 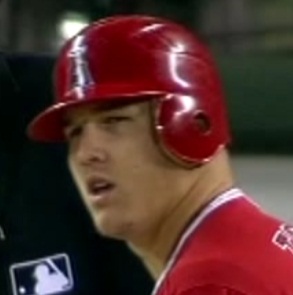 RBI - 137: Hamilton is only player in the AL within shouting distance, but still trails Cabrera by 10 RBI.

Omar Infante replaced Cabrera in the lineup after his 3rd at bat. Hamilton and Wonderboy are still playing on the west coast as this post goes live.

We are 1 game away from witnessing history.

If you can dodge a line drive... 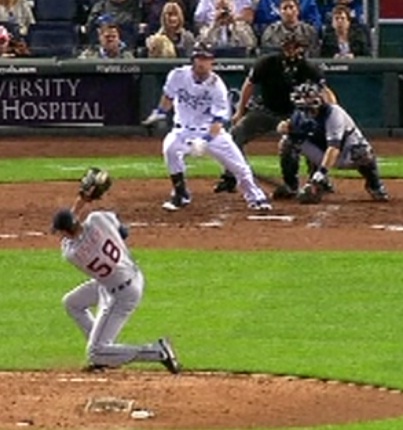 ...you can dodge a baseball. 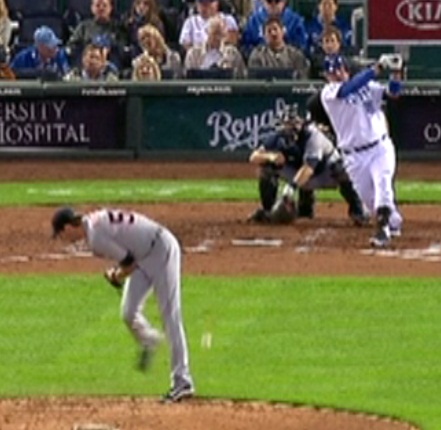 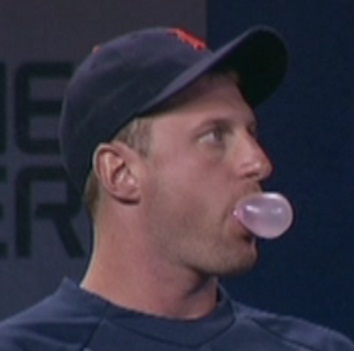 Luke Putkonen: Pitched a solid 1 2/3 scoreless innings in relief of Doug Fister. Wouldn't have allowed an inherited runner to score, but Ramon Santiago double clutched on a double play ball.

Miguel Cabrera: 2-3, 2 RBI. As for the Triple Crown? I wouldn't bet against him

Danny Worth: Played flawless defense, the only Tiger other than Cabrera to reach base more than once.

Ramon Santiago: Had a rough night with the glove, even if he wasn't charged with an error. Santiago is under contract for next season, but you have to wonder if he is in the Tigers' plans for next season.

Brennan Boesch: 0-4, never hit the ball out of the infield. He looks completely and utterly lost at the plate. It's a given Boesch will not be on the playoff roster.

Brayan Villarral: Allowing a long home run to the consensus worst player in MLB, combined with his recent struggles, does not give me confidence Villarreal will be a positive factor in the post-season.

Miguel Cabrera had 4 hits and his 44th home run in the division clincher, taking a big step toward the the first Triple Crown in 45 years in the process. All of which was more than enough for the BYB readership to vote Cabrera PotG.