Behind Enemy Lines: Previewing the World Series with McCovey Chronicles

Grant Brisbee, the managing editor of McCovey Chronicles (and a fantastic writer at a bazillion other sites), took the time to answer five questions about the San Francisco Giants prior to tomorrow night's opening game of the 2012 World Series.

Share All sharing options for: Behind Enemy Lines: Previewing the World Series with McCovey Chronicles

We did a Q&A with Athletics Nation prior to the ALDS (and, unfortunately, didn't have the time to do so with Pinstriped Bible before the ALCS) and figured that this whole "World Series" business was important enough to do it again. Grant Brisbee, editor of McCovey Chronicles and probably my favorite baseball writer on the planet, was kind enough to answer five questions about the San Francisco Giants leading up to Game 1 of the World Series tomorrow night at AT&T Park.

You can check out my answers to Brisbee's questions over at McCovey Chronicles.

1. From an outsider's perspective, the Giants' offense seems to be an unstoppable force hell bent on destroying every pitcher in it's path. Is this accurate, or is there a way to slow this juggernaut down?

We're so used to thinking that the Giants have a feckless, sleepy offense after the last few years, that it's hard to accept the Giants as a hitting team. But, yeah, they can hit this year. Their raw numbers aren't that great, but AT&T played like a crazy pitchers' park this year -- one of the most extreme in decades. The Giants led the National League in road runs, and they were second in all baseball, just nine behind the Angels.

If Pagan and Scutaro are hitting at the same time, they set the table well for Sandoval and Posey. The way to slow everything down is to get those guys out, or let a couple of them get on and throw breaking balls to Hunter Pence.

2. If you had just woken up from a 10 year coma, you would think that Barry Zito hadn't missed a beat from his glory days with the Athletics. The rest of us know better. Should we expect a repeat performance of Game 5 in this series?

I made a graph! 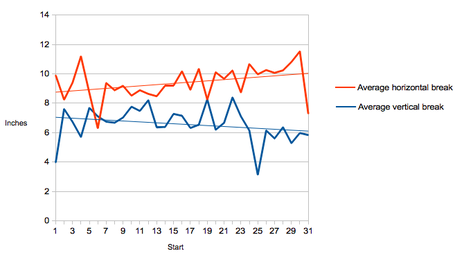 That's the horizontal and vertical break of his curve this year. His curve has been breaking downward more -- which is a good thing. When it gets slurvy, it's hard for him to control. When it's going down, he can do this:

I'm not sure what's driving what -- is his improved curve easier to control, or are cleaner mechanics improving the curve? -- but he's been better over the last two months. For the six (!) years Zito's on the team, his good stretches have usually been a bunch of 3 BB/3K outings with a lot of balls in play that find mitts. It looks a little different this time.

Not that I'm exactly giddy about him starting in the World Series, mind you.

3. I'm not sure if you heard (/sarcasm), but Jose Valverde is having some issues for the Tigers. Is there a similar weak link (or links) in the Giants' bullpen?

There isn't a wholly combustable element -- that one guy that makes you duck for cover. Santiago Casilla had a miserable stretch in the middle of the season, and he has a penchant for allowing a homer at exactly the wrong time, but it says something that Giants fans are apt to worry about a guy with a cumulative 2.22 ERA over the last three years. I know ERA isn't the best predictive metric for relievers, but it speaks to a larger bullpen strength, too.

The Giants don't have that guy -- that K-Rod in 2002, or Craig Kimbrel -- who makes you give up when he's in the bullpen. But between Sergio Romo, Jeremy Affeldt, Javier Lopez, and Santiago Casilla, they do okay for themselves in the late inning.

4. How do you think that the Giants' rotation will shape up? Specifically, will we see Ryan Vogelsong and/or Matt Cain on short rest at any point to potentially get them two starts in the series?

No idea about the order, but I sincerely doubt you'll see short rest for anyone. No one's been *that* dominant, and all of them have had rough patches at some point over the past two months.

5. Most valuable bear in this series: Panda (Pablo Sandoval) or Teddy (Prince Fielder)?

Really, the only way to find out is to Google "San Francisco" and "Bear." I'll wait.

I had no idea that Prince Fielder had a teddy-bear-related nickname. His name is already Prince!

Because of science, not bias.