Miguel Cabrera is on the cover of Sports Illustrated

Triple Crown winner and Detroit Tiger extraordinaire Miguel Cabrera made the regional cover of Sports Illustrated this week as the Tigers get set to face the Giants in the World Series.

Share All sharing options for: Miguel Cabrera is on the cover of Sports Illustrated

In the wake of the Detroit Tigers' sweep of the New York Yankees to advance to the World Series, Tigers star and MVP-candidate Miguel Cabrera will be featured on the regional cover of this week's Sports Illustrated. Tigers media director Brian Britten broke the news and provided a look at the cover on his Twitter account late Monday night.

It's the first time that Cabrera has been featured on the cover of SI, and the first time for a Tigers player since Sept. 17, 2011, when the magazine called for Justin Verlander to be named MVP of the American League. Of course, if all goes well for the Tigers, they won't have to wait another 12 months to see another cover of SI. The article that accompanies the cover was written by former Detroit Free Press columnist Michael Rosenberg.

The Tigers will face the San Francisco Giants in the World Series, with Game 1 set to begin at 8:07 p.m. ET Wednesday night. Reigning Cy Young winner Justin Verlander will be on the mound for the Tigers, opposed by Barry Zito of the Giants. 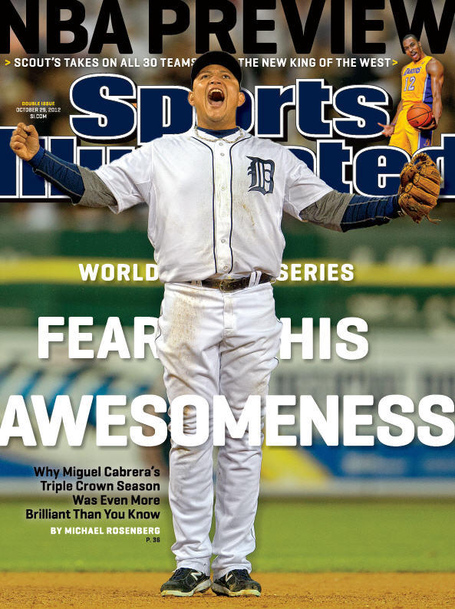