The Giants have the Tigers on the brink of elimination while the offense finds their picture on the side of a milk carton.

The San Francisco Giants shut the Detroit Tigers out for the second consecutive game, a 2-0 victory to seize complete control of the World Series. The Giants are up 3-0 on the Tigers and can close out the series with a win Sunday.

Ryan Vogelsong received credit for the win, combining with Tim Lincecum and Sergio Romo to shut out the Tigers on 5 hits. Anibal Sanchez only allowed a pair of 2nd inning runs and 5 hits in 7 innings, taking a hard luck loss.

Brandon Crawford had an RBI triple and Gregor Blanco and RBI single to account for the Giants scoring. Omar Infante had 2 hits to lead a flaccid, ineffective...Hell, just break out a thesaurus...Tigers offense.

Sanchez toes the rubber to start game 3. Pablo Sandoval is the only base runner in the top of the 1st, dropping a 2 out bloop in front of Austin Jacskon, because, as we all know, Jackson only leaves his feet in dire situations. Sanchez struck out Buster Posey to end a solid inning.

Bottom of 1, Vogelsong walks Quintin Berry with 1 out, and the "MVP" chants start in earnest for Miguel Cabrera. Cabrera falls behind in the count 0-2, but sends a single through the left side, Berry advancing to 2nd. The table is set for slumping Prince Fielder.

But Fielder does not come through, grounding into the 4-6-3 double play. Cabrera went for the take out slide on Brandion Crawford, but Brandon Belt's foot appeared to be off the bag while grabbing what was a low, wide throw.. Once again, the Tigers don't get a call.

Cue a very worried and restless Tigers fan base mumbling "Here we go..." on the social networks.

Sanchez strikes out Belt, but Pence is able to steal 2nd on strike 3. Blanco at the plate, Alex Avila can't grab Sanchez's high and outside fastball, Pence taking 3rd on the wild pitch.

The wild pitch didn't make a difference, as Blanco sends Sanchez's breaking ball off the scoreboard in right center, Pence jogging home on the RBI double.

Sanchez nearly throws another fast ball over Avila's head before striking out Hector Sanchez for the 2nd out. It appeared Sanchez was having issues in what was a cold, cold night in Detroit.

Crawford followed with a looper to center, Jackson does die and tries to catch the ball on the short hop. Unfortunately, the hop eats him up, and the ball gets by him. By the time Andy Dirks runs the ball down, Blanco had scored and Crawford standing on 2nd. The play was scored single, E-8.

Sanchez gets out of the inning on a Angel Pagan's bouncer to 1st. This was NOT the start the Tigers needed or their fans wanted to see. The Tigers squandered an scoring opportunity with help of a bad call, while the Giants make the most of the first chance.

The last 2 half innings were the World Series in a nutshell.

Rick Pocello is warming up in the Tigers' bullpen as the Tigers try to get their offensive act together. HA!

Young leads off the bottom of the 2nd by drilling a line shot to center field. The ball may have left AT&T Park's shallow center field, but it's just a long out at Comerica. Dirks runs the count full, but pops up. Jhonny Peralta hits a fly ball to deep right center. Ir's.where fly balls go to die, unless you're the Giants.

The Tigers go down in order after the Giants put up a crooked number. Cue fan frustration rising.

Whatever had bothered Sanchez in the 2nd had been taken care of in the 3rd, shown by a 1-2-3 inning. Not that you would have realized it, FOX spending most of the inning blatantly pimping Taco Bell.

Bottom of 3, Avila struck out leading off. Omar Infante ripped a line single to left, Jackson followed with a slow roller to the Panda. Jackson beat the throw, Infante taking 2nd and the crowd suddenly back in the game.

And just like that, the crowd was taken out of the game when Berry swings at the first pitch and grounds into a tailor made 4-6-3 double play. All I could blurt out was, YOU GOTTA BE F******* KIDDING ME!" Making it all the more infuriating was Cabrera was left standing on deck.

Sanchez bounced back after a hugely frustrating half inning, allowing a single to Pence before setting the Giants down in order.

The bottom of the inning was more of the same from the Tigers' offense. Nothing.

Cabrera broke his bat, lining out to 2nd. A pressing Fielder struck out looking, dropping his post season batting average below the Mendoza line in the process. Shockingly, Young worked a base on balls. Dirks absolutely hit a pitch on the screws, one hopper, but has happened all series long, it was directly at a Giant. Marco Scutaro scooped up the one hopper for the 4-3 inning ending ground out.

Sanchez was channeling his inner Doug Fister, setting the Giants down in order, with help from Jackson. Pagan hit a fly to the deepest reaches of Comerica, near the 420 mark in center, Jackson running the fly down, the ball still visible as stuck in the heel of his glove.

The Tigers finally hit Vogelsong in the bottom of the 5th,but not enough to get on the scoreboard.

Peralta scorched a line shot toward the left field corner, but Panda made a diving grab for the 1st out. Once again, the Giants making plays to thwart the Tigers.

But the Tigers would put themselves back in the same situation they found themselves in the 1st and 3rd innings, runners on 1st and 2nd with 1 out. Avila and Infante singled, setting up Jackson. There would be no double play this time, Jackson walked to fill the bases...for Berry.

2-1 count, Berry fouled off what would have been ball 3, then struck out. Better than a GIDP, considering Cabrera was on deck.

Swinging at the first pitch, Cabrera narrowly missed an extra base hit, his looping liner to right falling just foul.The next pitch was shoulder high, and was far too eager to swing Cabrera popped it up, ending the inning...and possibly the Tigers' chances at winning the series.

Sanchez kept rolling in the 6th, allowing only a Pence infield single, striking out Belt to end the inning. As stellar as Sanchez had been, the pitch count clock was ticking. His 7th strikeout was his 104th pitch of the night. 100 pitches is when Jim Leyland normally starts to think about pulling Sanchez.

Fielder's struggles continued in the 6th, lining out to right to start the inning. He hit it hard, but (this is getting old) right at Pence. Young grounded out to Panda, which somehow amazed Joe Buck.

Dirks worked a walk, which brought Bruce Bochy out of the dugout. Out went Vogelsong, in came Tim Lincecum. Well, so much for the 6th.

Lincecum induced Peralta to send a can of corn to Pence, ending another FRUSTRATING inning of no offense.

Sanchez was still on the mound for the Tigers in the 7th. A free agent at the end of the season. it may have been his last a Tiger.

He got a break when the other Sanchez was called out despite Fielder's foot being off the bag, Crawford singled with 2 out, then stole 2nd, giving Pagan a shot a knocking in the Giants' 3rd run of the night.

Sanchez threw a wicked breaking ball for a called strike 3, ending the inning and his night at 117 pitches.

Berry's miserable night reached a crescendo in the 7th. The crowd came to life after Jackson walked with 2 out. But Lincecum ate Berry alive, striking him out on 3 pitches. The 3rd pitch an absolute waste pitch far out of the strike zone, yet Berry still went fishing.

Joaquin Benoit took over for Sanchez in the 8th. After Scutaro grounded out, Tiger Killer (I think he joins the TK club at this point) doubled off the base of the left field wall. But Benoit got a big pair of outs, striking out Posey and Pence grounding out 6-3.

Bottom of 8, Lincecum shatters Cabrera's bat, but he still sends a ground ball up the middle for a...no, Crawford smothers the ball, then easily throws out the slow of foot Cabrera.

Fielder, looking more lost than a Clark Griswold trying to find his way to Wally World, struck out on 3 pitches. A very frustrated crowd let him have it, boos were quite audible on the FOX feed.

Young hit a hard ground ball to short, which Crawford boots. He rushes the throw, Belt unable to pick the ball out of the dirt, Young safe on the error.

But there would be no rally. Dirks struck out swinging, just as Berry, on a pitch closer to 8 Mile than home plate. Runner number 10 was officially stranded.

Phil Coke entered the game for Benoit, hoping to shut down the Giants and give the Tigers' limp offense a chance to pull this game out. Coke continued his sterling post season, striking out the side.

Sergio Romo came on to close out the game for the Giants, 3 out away from taking a chokehold on the series. scheduled to face Peralta, Avila and Infante.

Peralta hit the ball hard, but foul, a liner into the left field corner. Of course, the Giants continued making great plays, Blanco running the ball down against the wall.

Avila hit a lazy fly to Pagan for the 2nd out.

Infante stuck out to end the game.

The Tigers are now the first team since the Dodgers in 1966 to be shut out in consecutive games.

I'm really at a loss to describe the pain of watching the Tigers look so helpless the past 2 games. A team never looks worse when they aren't hitting, and the Tigers currently look horrific.

Next verse, same as the first. Deja vu all over again. Same story, different game. Game 3 was damn near a replay of game 2. The Giants do all the little things right, score just enough to win. The Tigers' pitching is great. but gets a nothing more than a loss to show for it. The Tigers' offense is historically, pitifully, miserably bad, sucking the life out of the team.

At the moment, until I see a sign, any sign of life in the offense, there's no reason to expect anything different in game 4. Max Scherzer is going to have to no-hit the Giants to give the Tigers a shot at winning, and even then, I wouldn't count on the offense scoring.

Really, what more is there to say?

The Tigers don't just have an uphill battle. They have a Mount Everest battle.

Bullets are brought to you by the most loathed announcers in America, Joe Buck and Tim McCarver. McCarver is saying, "BRAAAAAINS." 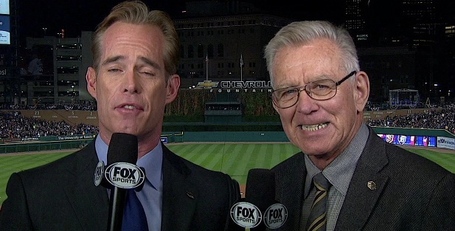 Berry holds his head in frustration after his GIDP in the 3rd. Thousands of Tigers fans did the exact same thing. 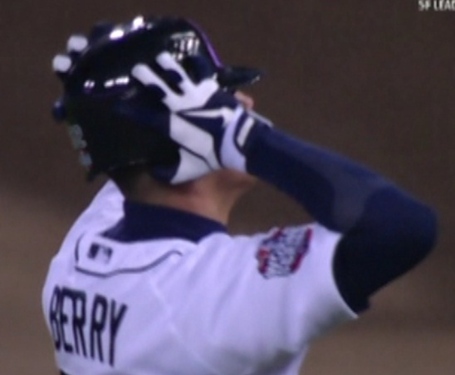 The swings which crushed Tigers fan's hopes, Cabrera popping up with the bases loaded. 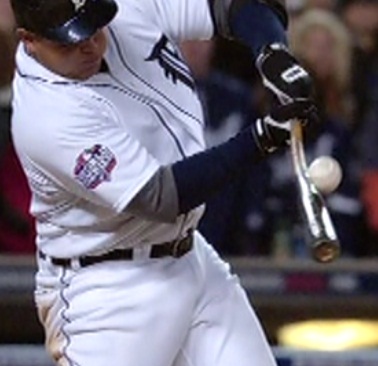 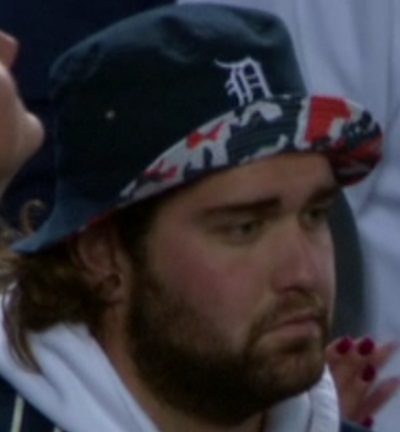 Joaquin Benoit: Allowed Panda to get on base, but struck out the next 2 Giants in a scoreless 8th.

Phil Coke: Remains lights out in the post season, struck out the side in the 9th.

Omar Infante: Owned the only bat that worked, had 2 of the Tigers' 5 hits.

Prince Fielder: Having a miserable playoffs and a worse World Series.

Miguel Cabrera: Tried to hit a grand slam on a bad pitch with the bases loaded, popped up instead.

Everyone else who swing a bat: When you're being compared to the pitiful 1966 Dodgers' World Series offense, you've hit rock bottom.

Being he was the only Tiger deserving of the honor., it was Doug Fister by acclimation.