In a season for the ages, Miguel Cabrera wins the first Triple Crown in 45 years while the Tigers take down the Royals 1-0 to win their season finale.

The Detroit Tigers finished off their regular season in fine style, beating the Kansas City Royals 1-0 as Miguel Cabrera clinched the Triple Crown.

Miguel Cabrera started the game at 3rd base, went hitless in 2 at bats, and was pulled in the 4th inning. That was enough for Cabrera to post the first Triple Crown season MLB has seen in 45 years. Cabrera ends a history making regular season with a .330 batting average, 44 home runs and 139 RBI.

Luis Marte pitched 3 1/3 scoreless inning in relief for the Tigers, picking up the victory. Luke Putkonen receiving credit for his first career save. Royals starter Luis Mendonza deserved better, allowing just 1 run and 6 hits in 7 innings, but was tagged with the loss.

Austin Jackson accounted for the game's only run with a 5th inning RBI double.

What crowd there was in Kansas City tonight gave Cabrera a standing ovation as he strode to the plate with 2 down in the top of the 1st. Cabrera flew out to center on an 0-2 pitch to end the inning.

Max Scherzer, making his first start in since the September 23rd, set down the first 2 Royals he faced. Even better, his fastball was topping out at 96 MPH. That was a good 4-5 MPH faster than in his last start, when it was obvious he didn'tt have that extra giddy-up on his go-to pitch.

But the Royals kicked up their heels when Alex Gordon walked and Tiger Killer Billy Butler singled past a diving Cabrera. But he of the -2.5 brWAR, Jeff Francoeur, hit a warning track fly to Dirks in right.

Scherzer pitched out of trouble, slight though it may have been. But again, the most important thing was Scherzer's velocity was where you expect it.

Prince Fielder (as the DH) was the Tigers' first base runner, lining a lead off single to center. Alex Avila worked a base on balls, the Tigers threatening. But Royals' starting pitcher Luis Mendoza sawed off Slumping Jhonny Peralta, shattering his bat. A 5-3 double play resulted, Avila taking 2nd. Dirks necked up to 2nd, inning over.

Cabrera was unable to bare hand Johnny Giavotella's swinging bunt with 2 out in the 2nd, called an infield single. No harm, no foul, Irving Falu grounded out 5-3.

Austin Jackson singled after 2 were down in the 3rd, giving us hope we'd see Cabrera bat with a runner on base. But Quintin Berry swung through a breaking ball, striking out.

Yesterday's Royals hero, Alcides Escobar, singled with 1 down in the bottom of the 3rd, then swiped 2nd. 1st base open, Gordon walked. Drew Smyly and Luis Marte wer warming up in the bullpen as Tiger Killer Billy Butler faced Scherzer.

Scherzer used shoulder high 95 MPH heat to strike out the Tiger Killer for the 2nd out. Frenchy connected on a high fastball, but sent it to the deepest part of Kaufman Stadium, Jackson flagging the fly down on the warning track in dead center.

Scherzer wrapped up the 3rd after 65 pitches, you have to believe he only has an inning left.

Cabrera lead off the top of the 4th, looking for 1 more hit for posterity's sake. But he struck out on an inside fastball, finishing the regular season with a .330 average (actually, .32958199).

Fielder walked, Avila ripping a single to the opposite field. A threat! But Slumping Jhonny Perlata continued slumping, striking out. Dirks grounded out 4-3, the threat no longer a threat.

Bottom of 4, we have a Dave Dombrowski sighting in the FSD booth. Dombrowski talks in GM-speak as Rod and Mario toss him softballs.

2 down in the 4th, Ramon Santiago enters the game, Cabrera's regular season comes to an end. Cabrera gets an ovation, then a curtain call, from the classy Royals fans.

Omar Infante manufactured a run in the 5th. He singled leading, stole 2nd, stole 3rd and scored on Jackson's hustle double. Tigers take a 1-0 lead in what is now become everyone just biding their time until the end of the regular season.

Jim Leyland, knowing Jackson was now hitting and even .300, pulled for his CF for Avisail Garcia.

After 75 pitches and 4 innings, Scherzer's night was over as well. Drew Smyly took over in the 5th, hoping to get in an inning of work. Not stsartng off on the right foot, Falu walked. Pinch hitter Jason Bourgeois flew out, but that always pesky Escobar singled Falu to 3rd.

With Gordon at the plate, Smyly threw a diving curve into the dirt. While Avila was searching for the loose ball, Escobar took off for 2nd. Avila fired to Peralta, who tagged Escobar out while scrambling back to 1st, bailing out the Tigers for the time being.

After Escobar's hijinks, Smyly gave a free pass to Gordon. That was more than enough for Leyland, who called on Marte, who was originally going to start in place of Scherzer. Marte walked Tiger Killer Billy Butler, loading the bases, preferring to face Francoeur. That, or he was just wild.

Regardless, the walk was for the best. Frenchy lined out to Driks for the 3rd out, the Tigers clinging to their 1-0 lead.

The Tigers went down in order in the 6th. More substitutions, Delmon Young pinch hitting for Fielder. Of course, he struck out.

Marte stayed in the game to pitch the bottom of the 6th. The Royals, as they had all night long, threatened, but did not score. 2 down, Giavotella singled and Falu walked. But Marte got out of the jam when Bourgeois struck out.

The Tigers struggled with runners in scoring position all evening, the 7th was no different. Infante doubled with 1 out, the Wizard, Don Kelly, worked a wizardly walk. But Mendonza shattered another bat, this time Garcia's, leading to a 5-4-3 double play.

And the game dragged on.... //looks at watch// Nope, the playoffs haven't started, dammit.

On to the 8th. Berry walked, was bunted to 2nd by Santiago, taking 3rd on a passed ball. But both Young and Holoday went down swinging, the threat done dead.

Leyland kept sending Marte back to the mound, Marte kept getting Royals out. His 8th was uneventful, setting down the Royals in order.

9th inning, Dirks singled, but was eliminated on a 6-4-3 double play off the bat of Infante. No insurance runs for your closer...

Yes, the Big Putkonen - Papa Putkonen - LuPu took the mound in search of his first career save.

Giavotella hit a ground ball off Putkonen's pitching hand, Infante scooping up the deflection for a 1-4-3 ground out.

Falu bounced to Kelly, flipping to Putkonen for the 2nd out.

David Lough walked, bringing Escobar to the plate as the winning run. After Putkonen nearly threw a 1-1 over the head of Escobar, pitching coach Jeff Jones made a mound visit. The next pitch painted the black for strike 2.

Putkonen threw a 96 MPH fastball past Escobar for his first career MLB save and 1-0 Tigers victory! A very slow and boring victory (once Cabrera locked the Triple Crown), but a victory all the same!

Bullets are brought to you by Triple Crown Miggy! 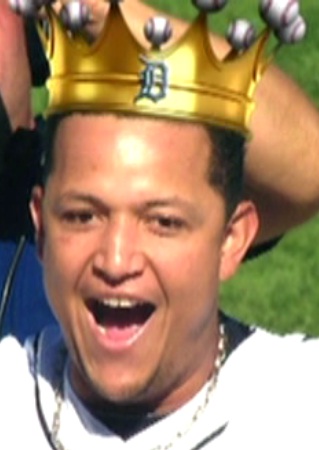 Going into tonight's game, it was all but assured Miguel Cabrera would be the first Triple Crown winner in 45 years.

Batting average - .331: It was essentially over a little after 8 PM. Wonderboy Mike Trout was hitting .324 after 2 at bats. Shampoo spokesman Joe Mauer sat at .320 halfway through his game. Considering Cabrera wasn't going get more than 2 at bats, it was virtually impossible for him to be caught.

Home runs - 44: Josh Hamilton's season ended with 43. Edwin Encarnacion, having missed the final few days of the season due to injury, ended his season at 42. The only distant threat remaining for the home run crown was Curtis Granderson, entering play with 41 bombs.

Cabrera's night was a short one.

Trout has a 2-3 night, finishes at .326. With a late rush Adrian Beltre hit .321, passing Mauer. Granderson hit dinger number 43 in the 7th against the hapless Red Sox. But the Yankees were up huge in the 7th, the likelihood Granderson could hit 2 more home runs were almost nil. But the Sox can't get anyone out, and the Yankees bat around. Meaning Granderson still has a shot at catching Cabrera. A long shot, but a shot.

Even though the home run crown still in play and Granderson is swinging for Yankee Stadium's Little League short porch in right, he's pulled for a pinch hitter in the endless 7th inning. Grandy will end the season with 43 big flies.

There's a lot of things I've seen happen over these many years. But a Triple Crown? Never thought I'd see the day. A-freaking-mazing. 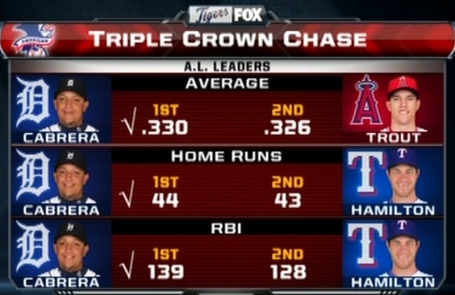 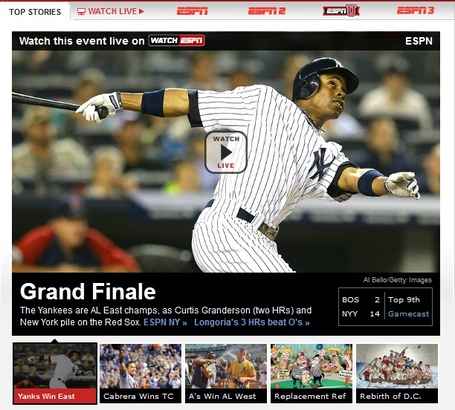 So does this cap of SportsIllustrated.com: 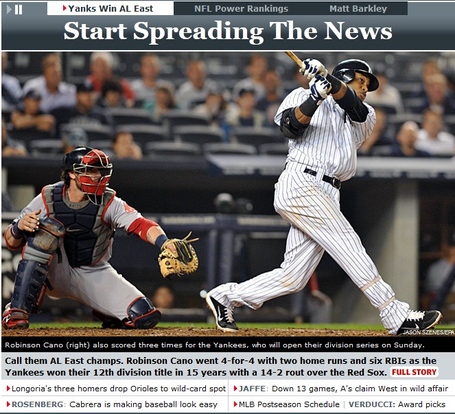 Luis Marte: 3 1/3 shutout innings in relief, exactly what the Tigers needed when Leyland wanted to rest teh bullpen big guns.

Austin Jackson: 2 hits and an RBI capped a wonderful breakout season for one of the best CF in baseball.

Miguel Cabrera: No hits, but a TRIPLE CROWN.

Luke Putkonen: His first career save deserves a roar.

Not going to even worry about it on what was a history making night.

After 2 hits all but locked up the batting title, there was no doubt game 161 PotG would be Miguel Cabrera. It was, with 72% of the vote.