Justin Verlander struck out 11, Alex Avila homered and the bullpen was stout in a 3-1 Tigers victory over the A's, taking game 1 of the ALDS.

Riding the mighty right arm of ace Justin Verlander, the Detroit Tigers held on to beat the Oakland Athletics 3-1, winning game 1 of their division series.

Alex Avila was the big bat for the Tigers with 2 hits, including a solo home run, Quintin Berry adding a pair of singles. Coco Crisp provided all the offense for the A's with his 1st inning home run.

Verlander's first pitch to Crisp was a 95 MPH fastball. His 3rd pitch was a letter high 95 MPH fastball which Crisp pulled over the 330 mark in right for a quick-strike solo home run. A's stunned a sold out Comerica by taking a 1-0 lead before Verlander could record an out.

Stephen Drew hit a can of corn, but Yoenis Cespedes worked a walk when Verlander's breaking ball dove into the dirt. Verlander struck out Brandon Morrow and Josh Reddick swinging to keep the damage to a bare minimum of 1 run.

More concerning than the run was the fact Verlander needed 26 pitches to get through the inning. Verlander's pitch count would be a worry for much of the game.

Facing Parker, Austin Jackson ripped a hot shot off the glove of a diving Drew, the deflection allowing Jackson to leg out a lead off double.

For some unfathomable reason, Jim Leyland had Berry bunting. Unable to lay down a ridiculous bunt, with 2 strikes Berry slapped a single off the glove of 3rd baseman Josh Donaldson. Good things happen when you DON'T BUNT IN THE 1ST INNING.

Miguel Cabrera, MVP chants ringing throughout Comerica, grounded into a run scoring 6-4-3 double play. It quashed the rally, but evened the score at 1-1. Parker, just as Verlander, kept the damage to a minimum when Prince Fielder flew out.

The A's were doing their best to inflate Verlander's pitch count, They were successful in doing so during the early going. Top of the 2nd, Donaldson walked on a 1 out 3-2 pitch, but was eliminated on a 6-4 fielder's choice off the bat of Derek Norris.Verlander ended the inning in a Verlanderian way, striking out Cliff Pennington.

Verlander was a much more typical 17 pitches to get out of the 2nd.

Leading off the bottom of the 2nd, Drew took away a single from Young on a nifty diving stop. Andy Dirks and Jhonny Peralta went down far too quickly, in a 7 pitch inning for Parker. Yes, Young had the longest at bat of the inning.

1 down in the 3rd, Drew found the gap in left center, dropping for a 2 base hit. Verlander pitched out trouble on a Cespedes ground ball to Cabrera and a strike out of Brandon Moss. Unfortunately, Verlander was averaging 20 pitches an inning, sitting at 61 through 3.

Bottom of 3, Infante jumped all over an inside breaking pitch, yanking it into the left field corner for a 1 out double. Jackson popped up for out number 2. Parker really wanted to get Berry, not wanting to face Cabrera with a runner in scoring position.

Berry fell behind in the count 0-2, battled back to 3-2, then swung over top of a fastball, pounding it into the turf. But knowing Berry's speed, Parker rushed the play, trying to use his glove to flip the ball to 1st. Instead, Parker knocked the ball into foul territory, Berry safe with an infield single, Infante scoring on the error.

1st base open after Berry stole 2nd, Parker walked Cabrera. Fielder took a huge swing, sending a flair into shallow center. 2nd baseman Pennington, the only A who could make the play, did. His nice running catch saved a run and ended the inning, Tigers up 2-1 after 3,

Verlander, struggling with his command, walked Josh Reddick leading off the 4th. Donaldson struck out swinging. Infante made a nice play going to his left on Seth Smith's grounder, turning it into a fielder's choice. Of course, TBS's Bob Brenley harped on Peralta not trying to turn 2, when the smart play was holding onto the ball, instead of trying to force something that wasn't there. We've seen that happen far too often in 2012.

The inning ended when Norris popped up to short left (or if you were watching last night's Braves-Cardinals game, the infield), Verlander now at 78 pitches through 4.

Leading off the bottom of the inning, Parker drilled Young in the hand with an inside fastball. But the inning quickly flamed out. Dirks flew out to left on a 2 pitch at bat. Trying to avoid grounding into a double play, the Tigers ran into a strike 'em out - throw 'em out double play instead. Peralta the former, striking out on a 3-2 pitch, Young the latter, out stealing by 10 feet.

Crisp, having Verlander's number, led off the 5th with a single to center. Verlander set down the next 3 A's in order. The pitch count hawks were on high alert, Verlander sitting at 91.

Alex Avila, first pitch swinging in the bottom of the 5th, took Parker high, far and deep to left, the ball landing in the bullpen. The solo home run upped the Tigers lead to 3-1. A little early to call it an insurance run...but with Verlander on the mound...why not?

Making a bid for an extra base hit, Reddick took a hit away from Jackson with a diving catch in the right field corner. Berry couldn't get on for the 3rd consecutive at bat, the Tigers settling for a 3-1 lead through 6.

A quick 6th for Verlander would assure the Tigers' ace would pitch at least into the 7th. That's just what he did, in spectacular fashion.

Moss struck out swinging on 4 pitches. Verlander needed only 5 pitches to strike out Reddick. The 5th pitch an evil 98 MPH fastball painting the black. Pennington was dead batter walking, Verlander striking him out on 3 nasty pitches. Cake. Just cake.

Parker countered by sending the Tigers down in order on 10 pitches, though he was a little lucky. Cabrera got underneath a fastball, sending it to deep right, but not deep enough, just short of the warning track. Fielder's line drive was hit on the screws, but directly at Drew. Young being Young, well, he struck out on a low, outside breaking ball.

But Verlander was rolling. He completely overwhelmed Smith leading off the 7th, striking him out on 3 pitches. Norris waved at a wicked letter high fastball for out number 2, Verlander's 5th straight strikeout, and 6 of the last 7.

The strikeout streak snapped when Verlander walked Pennington on a 3-2 pitch, which was also pitch 120. Crisp tapped pitch 121 to Fielder for the 3rd out.

Verlander's dominant, dominant night was over.

Bottom of 7, the Tigers knocked Parker out of the game with a pair of singles. Leading off, Dirks necked a single to left. Avila followed by lining a 1 out, 0-2 pitch to left, Dirks taking 2nd on the base hit.

That would be the end of the road for Parker. It was an impressive playoff debut as a starting pitcher, no matter the result.

Pat Neshek took over in relief. He got a double play ball, but a hustling Infante beat the relay to 1st, keeping the inning alive. Jackson couldn't get the runner home from 3rd, striking out to end the threat.

Verlander having received the "Handshake of Doom" from Jim Leyland, it meant the game was placed in the hands of the Tigers' inconsistent bullpen. Per the dusty bullpen bible, setup man Joaquin Benoit started the 8th.

Drew hit a come-backer for the 1st out. But Cespedes' looping liner to left fell for a single.

Moss, one of the A's biggest power threats, took a big cut at Benoit's belt high breaking ball. He got almost all of it. Dirks took off for the 365 mark in right center, ran out of room, and waited.

Moss just missed going yard and tying the game at 3-3. Dirks hauled in the fly ball at the base of the wall for a very scary, yet harmless, out. That was all the drama Benoit would allow (and fans could tolerate), striking out Reddick to end a scary half inning.

Facing the 3rd A's pitcher of the night, Jerry Blevins, the Tigers went down in order in the bottom of the 8th.

With a 2 run cushion, Tigers fans know the time. What time is it? Big Potato time!

3-1 run lead, 3 outs to go, closer Jose Valverde on the mound. The TBS team played up Papa Grande's tendency to allow base runners, and the ensuing drama.

There would be no Potato mashing. There was one hot Potato instead. If you squinted, you would have thought it was 2011 Valverde throwing strikes, and lots of them.

Donaldson struck out swinging. 1 out.

Smith struck out swinging. 2 out.

Kottaras swung....and sent a lazy foul pop fly to Fielder, who snatched it out of the air or the final out.

The Tigers won't have much time to celebrate. Game 2 of the ALDS starts less than 15 hours after the end of game 1, noon on Sunday.

Bullets are brought to you by NEEEEERDS!. 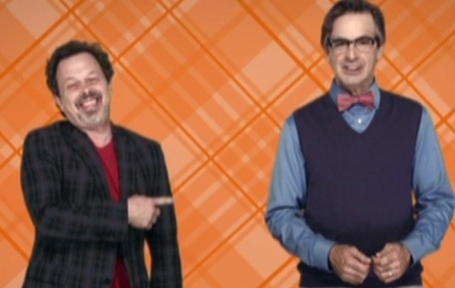 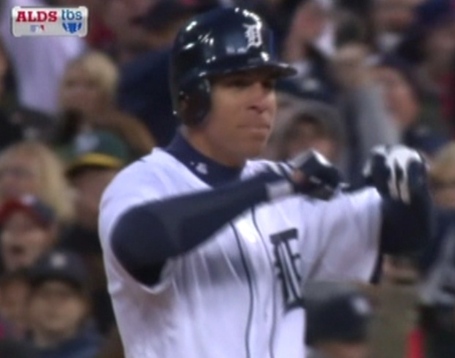 Think the A's know the book on Delmon Young? Check the pitch tracking. 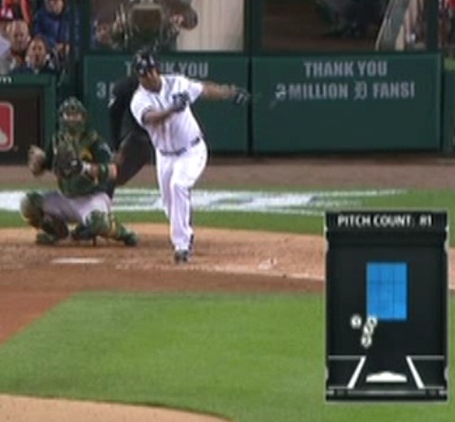 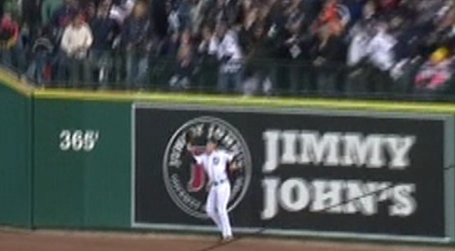 Joaquin Benoit thanks the Neck. 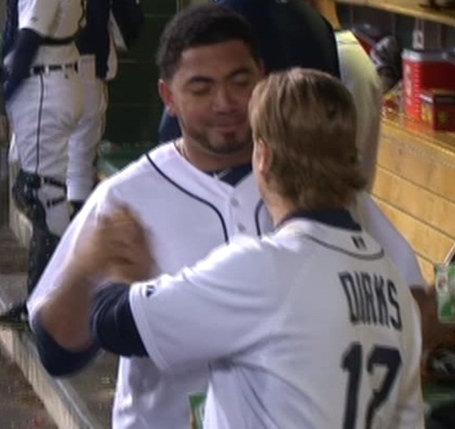 Justin Verlander: His arm is why the Tigers are going to be so hard to beat in a short series. Started slow and was inefficient with pitch counts early on, but was unhittable in his final few innings.

Alex Avila: To win in the playoffs, it helps to get a big game from a low in the order bat. For game 1, that bat was Avila.

Quintin Berry: Speed kills. It was Berry's speed which forced Parker into a run scoring error.

The Wave: The Wave needs to die a painful death.

The middle of the order: Fielder, Cabrera and Young combine to go 0-9 with a walk and HBP. The Tigers need big time middle of the order production if they want to move on to the next round. Cabrera did knock in the Tigers' 1st run on a double play ball, but did not get credit for an RBI.

Call it the Triple Crown appreciation award. Miguel Cabrera capped an incredible season (and clinched receiving the most 1st place votes this season) with his being awarded PotG in the Tigers' 1-0 victory over the Royals in the season finale.