Gene Lamont can no longer be blamed after a base runner is thrown out at the plate. You will now voice your displeasure with Tom Brookens.

In his oft-referenced end of season press conference, Dave Dombrowski said the entire coaching staff would return but duties would be shuffled. That was the last we heard about the subject...until today.

Tigers manager Jim Leyland announced to the media what was long expected. His right hand man, Gene Lamont, held personally responsible by the fan base for having runners thrown out at home, will no longer be coaching 3rd base.

Lamont's final legacy as 3rd base coach is an unfortunate one -- Prince Fielder being thrown out at the plate in game 2 of the World Series, a huge play in a 2-0 Tigers loss. 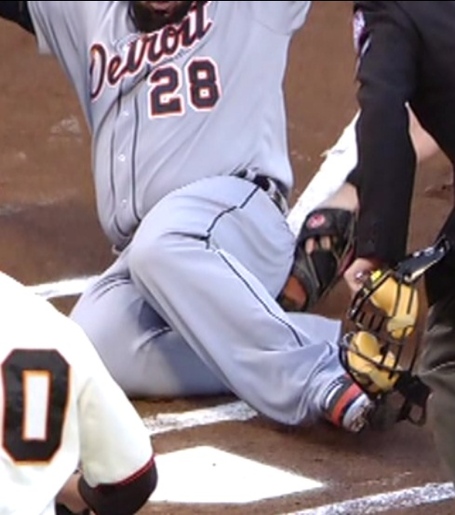 Lamont was given the newly created position of bench coach. Though it was already believed as such, this move officially makes Lamont second in command.

Tom Brookens, former Tigers 3rd baseman and fan favorite due to his playing on the 1984 champions, will return to the area of the field he is most familiar, replacing Lamont as the 3rd base coach (and as fan base punching bag). Brookens had been the Tigers' 1st base coach since the start of the 2010 season.

Rafael Belliard, Tigers infield coach since the end of the 2005 season, will take over Brookens' duties at 1st base.

You may now retire Gene_Lamont_Windmill.gif.

I have June 11 in the pool for "FIRE BROOKENS; BRING BACK LAMONT AT 3B"