Victor Martinez visits Lakeland for the first time; Joaquin Benoit has a secret weapon; and Theo Epstein cracks the whip in Chicago. These stories and more in today's Morning Prowl.

A final note before jumping into today's links. Our fearless leader, Kurt Mensching has re-vamped his personal website (kurtmensching.info) and it would behoove you all to go check it out. Kurt has redesigned it to be more than just an image gallery, but "a personal site with my photos, links to my writing, and (hopefully) most importantly the kinds of essays/blogging that one can't do when one's sports blog is about the Detroit Tigers." So, go forth and read.

A whole lot to watch at Detroit Tigers camp -- ESPN, Jayson Stark
A pretty good piece here from Stark on what it's like for Detroit to have Miguel Cabrera and Prince Fielder hitting back-to-back, and what it's like for opposing teams that have to face them.

Can you name the 2012 Detroit Tigers Spring training roster? -- Online Games & Trivia by Sporcle
Because I know everyone cares, Kurt got a 38. He blames it on Donnor. I got a 35.5. I blame it on the fact that I can never spell Nick Castellanos name right. So I'm giving myself half a point for knowing who I was trying to type, but not quite being able to do so.

Joaquín the Walk and Talking the Talk: Was Benoit More Valuable Than Valverde? -- Detroit Tigers Scorecard Blog, Alexandra Simon
I'm totally guilty of undervaluing Joaquín Benoit. Which is why I found this article to be quite interesting. Simon looks into the question: Was Benoit more valuable than Valverde in 2011?

Injured Victor Martinez makes first visit to Tigers camp: 'It's tough' -- Detroit Free Press, John Lowe
It's tough for us fans to see Martinez in that position, too. I'm excited for this season for obvious reasons, but I'm also excited for the day when he's back in the lineup alongside Prince Fielder and Miguel Cabrera.

Tigers' Joaquin Benoit reveals his secret weapon: his mind -- The Detroit News, Lynn Henning
"Joaquin Benoit is nearly as compelling off the mound as he is standing atop it. Intellect, pitching skill, a deep curiosity about the world and cultures around him, all wrapped within a wry linguist's conversational web."

A Few Words On Joel Zumaya -- Fire Gerald Laird
A more personal look at the probable end to Zumaya's career. Because I largely feel the same as Grey (@spacemnkymafia), I can't help but include every Zumaya article I can find. And on that note, it was also reported yesterday that Zumaya will have Tommy John surgery next month.

Detroit Tigers: Why the NL Central Is Theirs to Lose This Year -- Bleacher Report, Paul Grossinger
I can 100 percent guarantee you that the Tigers will in fact lose the "NL" Central. They are good, but they aren't THAT good. And, since I'm counting on the fact that this will be corrected come morning (though it's now 11 p.m. and it's been this way for going on five hours now), there's a screenshot I took after the jump just in case. I'm evil. 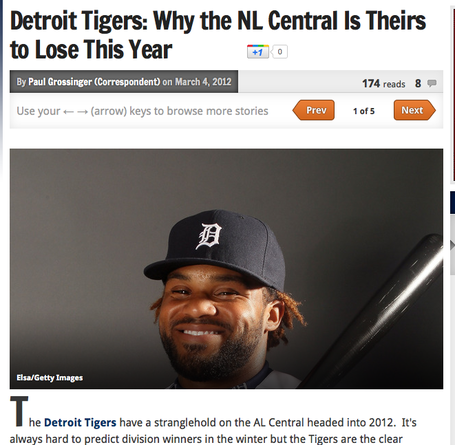 Around the AL Central:

Robin Ventura and the trial by fire -- SweetSpot Blog, Diane Firstman
"Robin Ventura succeeds Ozzie Guillen as manager of the White Sox, having never managed (or coached) at any level in pro ball."

Why the Kansas City Royals Will Win the World Series in 2012: A Fan's Take -- Yahoo! Sports, Alex Wibholm
It's always nice to be optimistic about your team. But, it's helpful to focus on making the playoffs (something the Royals haven't done in 26 seasons) before you discuss them winning the World Series. Yikes.

And that ain’t all, he stole home! -- The Hardball Times, Shane Tourtellotte
"An analytic look at Jackie Robinson's signature play." This is just a really great article through and through. Well-written, well-researched, and very interesting. I'd give it a read.

Theo Epstein Bans Drinking OUTSIDE Of Locker Room -- Baseball Nation, Rob Neyer
Too bad Epstein wasn't the general manager of the OTHER Chicago team during the 2009 season. Not that it would have prevented Miguel Cabrera from partying till the wee hours of the morning with the White Sox on the eve of the Tigers most important games, but it surely couldn't have hurt. Who has two thumbs and clearly needs to move on? This girl.

Game 163: The playoff system’s forgotten victim? -- Big League Stew
By now, I'm sure everyone has an opinion on the new playoff system implemented a few days ago. Duk offers an interesting take on what will become of the "game 163s" and why the playoff expansion might not be such a bad idea.