Share All sharing options for: Game 5 Preview: Rays at Tigers

Shields broke out in a big way in 2011. In the modern era of tight pitch counts and specialized bullpens, his 11 complete games and 4 shutouts are numbers that might not be matched for a while. He obviously won’t match these numbers again in 2012, but I’m a bit wary of whether he will match the rest of his stats as well. He left nearly 80% of runners on base in 2011, a stark contrast from his career mark of around 72%. His BABIP (our favorite statistic right now) of .258 was much lower than his normal .299. I think we’ll see a little regression from Shields this season, but I think he’s turned a corner and will top his career numbers once again.

In his first start of the season, Shields struggled with his fastball location and was roughed up by the Yankees to the tune of 9 hits, 3 walks, and 6 earned runs in 5 innings. As you will see below, his release points were pretty much all over the place. 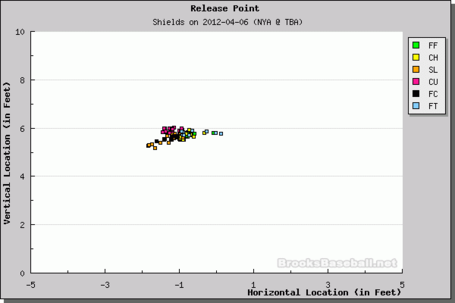 Thankfully for Shields, his offense also showed up and he ended the day with his 0-0 record intact. The silver lining for Shields (and Rays fans in general) is that his changeup was as unhittable as it was in 2011 (21% whiff rate). Shields has some of the best off speed stuff in the business, but it won’t mean much if he can’t find his fastball command again today.

As for Verlander? I don't think there's anything that needs to be said. Cody Ross feels the same way. (Click to open the gif in a new tab because it doesn't want to embed properly right now)

If there's one Rays hitter that I don't want to see walk to the plate right now, it's Carlos Pena. In a game full of weakly hit grounders (for the Rays) and fly balls (for the Tigers), Pena absolutely tattooed the ball in three separate at bats.

If it weren't for well placed Tigers infielders, he would have gone 3-for-3 and his average would be at .600 (small sample sizes are fun). Pena is locked in right now, and I think that Joe Maddon realizes it. His decision to bat Pena in front of Evan Longoria is giving Pena plenty to hit, with pitchers more concerned about Longoria behind him. The Tigers pitching staff (especially the righthanders) would be best served to plan around Pena instead of Longoria for the next two games.

Shields isn't going to struggle as badly as he did in his previous start very often this year. Nearly every mistake that he made was punished by the Yankees lineup; though, this is something that this Tigers lineup is very capable of doing as well. Assuming Verlander continues to be inhuman (not a guarantee by any means, remember that it's still April...), Shields will need to rebound from his last outing in order to keep the Rays in the game. Judging by what we've seen from him throughout his career (and especially last year), he will.

Bullpen Falters As Tampa Bay Rays Fall 5-2 to Detroit Tigers - DRaysBay, Erik Hahmann
"While he wasn't dominant, or even very sharp at times, Moore had a successful season debut." This kid is going to be special.

Know Thy Enemy: 2012 Tampa Bay Rays - DesigNate Robertson
Rogo gives us his take on the Rays, including some choice (and deserved) words for Luke Scott.

Pena proves you can go home again - TBO.com, Martin Fennelly
"I felt like I was going to explode," Pena said. "I felt like a kid. I felt like a kid out there." Nice to see another first baseman enjoying a homecoming this season.

2012 Season Previews: David Price And James Shields - DRaysBay
'And yet in 2011 Shields was fantastic, with a 2.82 ERA. His HR/FB fell back to only slightly above average and he posted a Prician 79.6% strand rate to go with a very low .258 BABIP."