Peavy wasn’t particularly sharp in his first outing of the year against the Texas Rangers, but he was able to grind his way to a quality start, giving up 3 runs in 6 innings. In particular, Peavy wasn’t locating his slider very well – both Josh Hamilton and Adrian Beltre narrowly missed hitting tape measure home runs on a couple of hangers – but the pitch looked like it had more bite than in the past couple years. It was a welcome site for White Sox fans after Peavy put up an ERA of 8.78 in 13 1/3 innings during Spring Training.

With Peavy on the mound, there’s a good chance that AJ Pierzynski will be on the bench. While this might still be speculation, it appears that Tyler Flowers will be Peavy’s personal catcher this season. Flowers isn’t the hitter that Pierzynski is, but his arm is much better. Flowers threw out Ian Kinsler in the only steal attempt against him this season.

As for Scherzer's last start? Yeeesh. 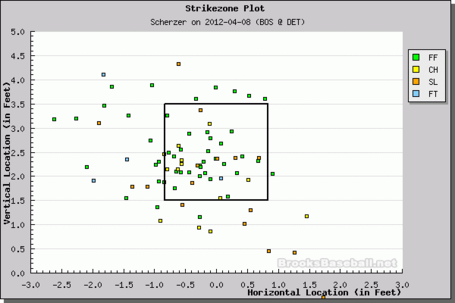 Yeah, that's the strike zone plot. Strangely enough, his release points were pretty consistent, so this amateur pitching analyst is left dumbfounded as to why he was so terrible against the Red Sox. I'd say that he will be better today, but the last time I did that we all ended up sitting in front of our TVs for 5 hours suffering from indigestion the entire time. In fact, I might have PTSD. We'll see what happens today before making any more bold proclamations about Scherzer.

I get it. It's super early. But in a division where 2nd place is seemingly up for grabs, the White Sox' 3-2 record after five straight road games to start the season is impressive. They were able to take one game from the Texas Rangers, then swept the Cleveland Indians in two games (the teams were snowed out on Tuesday). What has impressed me so far is their pitching. Their rotation already has three quality starts (one each from Peavy, John Danks, and Chris Sale), and the back end of the bullpen has been pretty solid as well. Again, it's early. But if the pitching staff can hold up, the White Sox could surprise some people this year.

With today being Chicago's home opener, expect their players to be a bit more aggressive than usual at the plate. If Scherzer is grooving fastballs in the middle of the plate, it could result in another short outing for him. Peavy won't ever regain his Cy Young form that he left in San Diego, but he could eat up some serious innings this year if he is as healthy as he says he is.

Peavy starts strong, but the Tigers' offense gets to him in the middle innings. No quality start for him today.

One Piece at a Time: a Detroit Tigers Preview - South Side Sox
"The Tigers are still the class of the divison, but when you look at their defense, complimentary hitters, and top heavy pitching staff, you start to see what could easily go wrong." Hey, at least we're not the Twins.

De Aza’s bat ahead of his base-running - Chicago Sun-Times, Daryl van Schouwen
Alejandro De Aza has had a few baserunning mishaps in the early season. He'll be a pest once he figures it all out.

Jake Peavy accepts new role with Chicago White Sox - Chicago Tribune, Mark Gonzales
Peavy sure seems motivated to get back to his 2007 glory days. Not sure that he will, but he's got the right mentality to do so.