Miguel Cabrera knows the rules of baseball. The White Sox grounds crew, not so much

Share All sharing options for: Miguel Cabrera knows the rules of baseball. The White Sox grounds crew, not so much

In the 1st inning of this afternoon's Detroit Tigers at Chicago White Sox series opener, there was a delay in play for over 5 minutes due to either blatant cheating or gross incompetence in the placement of the batter's box.

After Austin Jackson and Brennan Boesch struck out swinging against Jake Peavy, Miguel Cabrera came to plate. He took his stance deep in the batter's box, planted his back foot, then quickly pointed out an issue to home plate umpire Adrian Johnson. What was Cabrera's complaint? He thought the batter's box was too close to the pitcher's mound.

Johnson went old school, used Cabrera's bat to measure...and we found out there's a reason why Cabrera is considered one of the best hitters in the game. Johnson immediately called out the White Sox grounds crew to bring out their batter's box template, wipe out the the chalk, and start over. Cue White Sox fans chanting, "Detroit sucks!"

Cabrera was all smiles, screen cap via @WorldofIsaac: 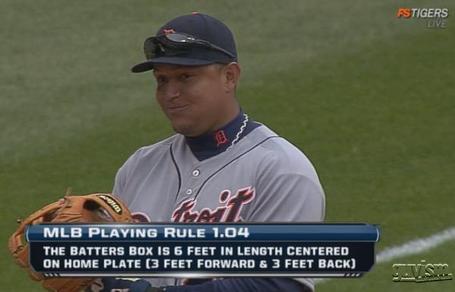 You can find video of Cabrera's mastery of the baseball rule book at MLB.com.

In the end, it was much ado about nothing. Cabrera flied out on the next pitch. But justice had been done.

The batter's box controversy gave conspiracy theorists all over the web a jumping off point, calling the White Sox cheaters and worse.Though calmer heads believed the White Sox grounds crew inadvertently committed a massive screw up.

As much as I would like to believe the White Sox are dirty, cheating scum willing to do anything to beat our glorious Tigers, Occam's Razor states the simplest answer is usually the correct one. Meaning the likely reason for this mess is the grounds crew at U.S. Cellular Field don't know what the Hell they are doing.