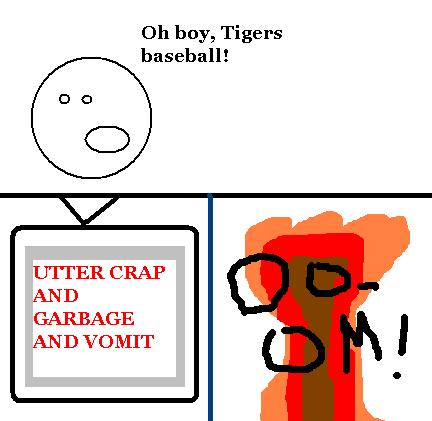 Tonight, by the grace (or disdain) of what ever minor deity I pleased (or displeased) I felt compelled to volunteer to take you through a journey to relive this night of awful Detroit Tigers baseball.

Yesterday I was giving a co-worker play by play of the Tigers - Mariners debacle (she was worried the M's would lose). I did this because it passed the time. Baseball itself is the national pastime - it passes the time between the start of the year and the end of the year. Baseball is with us from April until October. Those months are probably some of the best months of the year - or at least top 12. What I witnessed tonight was basically baseball taking a giant dump on my tender emotions.

The Tigers called upon Adam Wilk to try to not give up runs against a Mariners' line up that does its best to leave people on base. Instead, Wilk gave up 8 hits, 6 runs, ran over 27 manatees, bludgeoned 46 baby seals and touched our stomachs in a vomit churning performance. This is not to say Wilk's outing was horrific or sphincter clenching per se but the fact Wilk was tucked back in Toledo should tell you that Wilk's ability to hurl a sphere and not get shelled liked a target range is suspect.

Felix Hernandez followed Adam Wilk's awful first inning by loading the bases. After the spiteful wind helped to stop Miguel "Wonderbus" Cabrera from hitting an uplifting home run, a home run that would have cured minor diseases like actually liking the Marlins Home Run Monstrosity, El Rey loaded the bases. The Tigers would elect to respectfully decline scoring runs because good hosts do not actually try to win games (according to Miss Manners in her stellar guide of Baseball Rules, Etiquette and Stirrup Maintenance). This lack of scoring would continue until Brennan Boesch mercifully spared us Tiger fans from seeing a team shut out.

Errors by Prince Fielder and Jhonny Peralta did not do anything to allay the volatile contents of my stomach. Soon, I said to my gut, soon. Soon enough we will spew irrational hatred and bile about the outcome of this game. Perhaps we will take to typing our deepest, secret desires for player acquisition and the hanging of the manager by his intestines for not "firing the players up" or "not winning games despite him not hitting or pitching or fielding".

Instead of doing such unproductive things I sat and continued to watch, teeth gnashing and emotions welling up in the back of my skull. To offer a bit of respite to the man who updates this internet weblog on occasion from having to give up his personal thoughts in a recap of the game I decided to put cursor to MS Paint and deliver a near 100% accurate depiction of this game. The Tigers pitchers gave up 9 runs (though Duane Below did continue his good work out of the bullpen). Miguel Cabrera hit some very impressive outs. Don Kelly nearly castrated himself! Overall, there was something for any Tiger fan to gripe about tonight.

That is not to say the Mariners did not deserve this win. No, the Mariners actually hit the ball and scored runs - something that the Tigers seemed to be flummoxed in doing. I like the Mariners, but tonight they earned my scorn for actually remembering how to score runs and take advantage of another team's largess.

What sort of recap is this, you may ask? This is the retelling that a game of this caliber deserves - shoddy, ill-thought out, nigh unprofessional and certainly craptacular. Folks, this game was garbage, pure and simple, and we should put in the rear view mirror after it is burned at the stake, mocked by small children and forced to sit in a room with Teddy Ruxpin for a week. 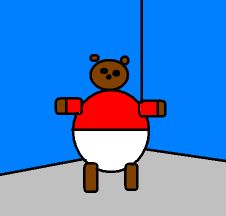 Duane Below - 2 scoreless innings to close on a high note

Not getting the run home - a few players were guilty of that. 8 left on base for the team

Alex Avila won handily to earn his first POG of the season.