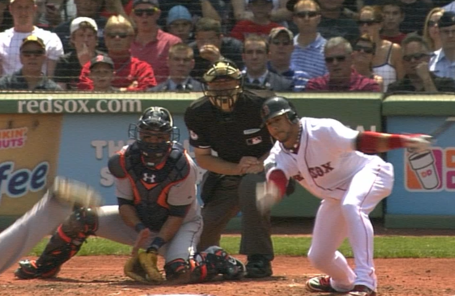 Still photo from MrNegative1 on Twitter, and the below GIF form, via our own Rob. Click the photo if necessary.

It's not good to blame officiating for your team's failures. It seems a bit tacky, like fishing for excuses. I'm generally not in favor.

But you do have to note that sometimes an umpire messes up, and sometimes it really does change the game. That happened when the Tigers met the Red Sox on Monday at Fenway Park.

With a 1-1 tie and two outs in the second inning, Mike Aviles appeared to strike out swinging on a pitch thrown by Doug Fister. First base umpire Bill Welke apparently saw it differently and signaled the ball hit the dirt. Not sure what, exactly, he saw though. A foul-tip that hit the dirt, obviously. Replays showed the ball was cleanly caught by catcher Gerald Laird and the inning should have been over.

Instead, Aviles singled, then Daniel Nava doubled, then Dustin Pedroia singled. The 1-1 tie became a 4-1 lead for Boston.

Detroit's defense struggles enough on its own. The umpires really don't have to assist matters.

Of course, we wouldn't be having this conversation if Fister managed to get the third out, so the blame can't go entirely on the umpire. Still ... third out is properly recorded, no runs that inning and the outcome could be completely different.

Detroit trails 5-2 in the sixth.

For record, umpires agree they got the call wrong. Bill Welke: "What looks crystal clear [on video] didn't look crystal clear from 1B line."