Yes, the big story for the Detroit Tigers in their 5-4 victory was Jhonny Peralta's walkoff home run, shocking the Chicago White Sox in the process. But there were plenty of other reasons why the Tigers were in a position for a walkoff win.

Without Miguel Cabrera's huge 8th inning RBI single, Peralta's homer just ties the game. The White Sox had a chance to both pull starter Jake Peavy (who was headed for a career high pitch count of 122...Justin Verlander rolls his eyes hearing the news) and pitch around Cabrera. Rookie White Sox manager Robin Ventura did neither. If you decide to pitch to Miguel Cabrera, you take your chances and pay the price. The White Sox paid a heavy price.

Drew Smyly was Drew Smyly: Effective and fun to watch. Though his streak of 1 run allowed starts to begin his career finally ended at 4 games, 2 runs allowed is none too shabby. More impressive is his 7 strikeouts, the third time this season Smyly has reached the number. Unfortunately, it's also the 4th time he's had a no-decision.

Alex Avila was the Tigers offensive catalyst on the night, falling a triple shy of the cycle. If it felt as if he was in the middle of every important rally...it's because he was! After a slump dropped Avila's average to .218, he's raised his average 51 points in the last 4 games to .269. The OBP still isn't in the best of shape, but Avila looks to be out of the woods offensively. The Tigers are going nowhere without a productive Alex Avila.

After Octavio Dotel had his first rough outing as a Tiger, Duane Below steadied the ship by throwing 2/3 of an inning of scoreless relief. If Drew Smyly is the breakout starting pitcher, Below has been the same for the bullpen.

When Jose Valverde doesn't scare us to death, it's a great outing. Even more so when he needed to keep the Tigers in striking distance in one of the Big Potato's normally shudder inducing non-save opportunity appearances.

If Ryan Raburn does something positive, I have to point it out. A sac fly and RBI is a positive.

Even though Peralta's game winning home run will get all the headlines, this was a big time team win. A badly needed one, at that.

For the nuts and bolts recap:

In the post game, Jim Leyland said he was going to hold Smyly to approximately 100 pitches per appearance (99 tonight) and discuss with GM Dave Dombrowski as to how many innings total they are going to allow the rookie to throw this season. There are plans in place to skip Smyly starts when appropriate as well. The kid gloves are now on whenever Smyly takes the mound. It's the Justin Verlander scenario, circa 2006.

Leyland also mentioned we were one Peralta walkoff home run from seeing Delmon Young's first appearance in the Olde English D since his suspension. He was going to pinch hit for wizardly Don Kelly. Would have been very interesting...

UPDATE: I received this screen cap from Rob, a BYB reader out of Chicago. He suffered through the White Sox broadcast, and gave me his thoughts on the Sox fan who wears his sunglasses at night.... 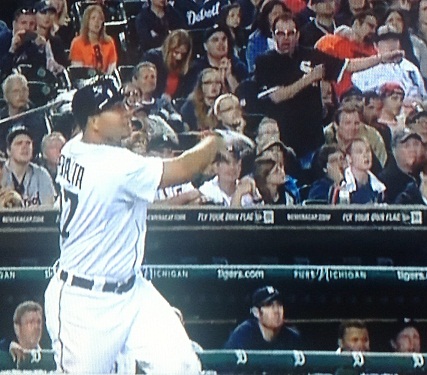 Head to See the White Sox play in Detroit.
Sit behind the Tigers bench.
Wear sunglasses at 10:30pm.
Stand up to motion an out on an 0-2 pitch.
Said pitch ends up being a walk-off 2 run homer, leaving you standing alone like jackass: PRICELESS

Alex Avila: Had a great game at the plate, reaching base 4 times. The Tigers aren't even in position to win without Avila. 3-3, BB, HR, 1 R, RBI.

Drew Smyly: The rookie actually gave up more than 1 run for the first time in his young career. What? He allowed 2 runs? Send him to Toledo! Seriously, Smyly has been the Tigers' wild card, in the best of ways. 6 IP, 7 H, 2 ER, 7 K

GAME 24 PLAYER OF THE GAME:

Justin Verlander deserved better than a no-decision, but the BYB community did give him a PotG win with 77% of the vote.