The Detroit Tigers took an early lead, then hung for life on late, beating the Seattle Mariners 6-4. Justin Verlander went 6 innings for the win, and is 3-1 on the season. Jose Valverde received credit for his 6th save. Kevin Millwood took the loss for the Mariners, his record falling to 0-4. Prince Fielder hit his 5th home run for the Tigers, while Andy Dirks added 2 hits and 3 RBI.

Just as they did on Monday, the Tigers got on the scoreboard early. It only took 3 pitches. Austin Jackson doubled into the right center gap, and rode home on Dirks' single. Just like that, 1-0 Tigers. The Mariners got off lucky, as Millwood allowed 3 hits and 2 walks (Delmon Young and Ryan Raburn back to back...shocking, I know!), but only the 1 run, the Tigers unable to get a bases loaded 2 out hit.

Dirks did it again in the 2nd inning, his 2 RBI double scoring Brennan Boesch and Gerald Laird. Young piled on the badly struggling Millwood, drilling his own 2 RBI double to score Dirks and Prince Fielder. Though having the smoking hot Jackson drop a sacrifice bunt in the inning while Millwood was throwing BP was on the bad side of ridiculous. Luckily, Dirks and Young made giving away an out moot.

Verlander had been inefficient, but effective through 2 innings. But but 3 consecutive 1 out singles in the 3rd plated 1 run, then Kyle Seager's single brought in 2 more. What had looked to be a 5-0 walk in the Safeco Park turned into an uncomfortably tight 5-3 game.

In midst of all the scoring, Jim Leyland was tossed by home plate umpire Brian Knight for arguing balls, strikes and a moving, inconsistent strike zone. Here's a sample of Knight's strike zone from MLB Gameday: 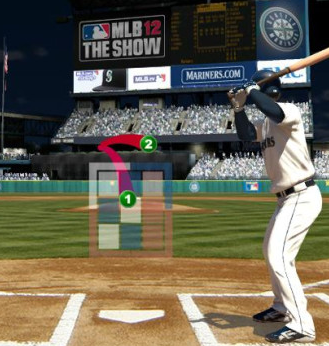 Verlander nearly got himself an early shower as well, demonstrably showing up Knight after not getting a low strike call. Laird immediately got between the ace and the ump, pitching coach Jeff Jones not far behind, calmer heads finally prevailing...even if a realistic strike zone didn't.

While the Tigers were preoccupied with the umpiring, Millwood had gotten untracked, holding the Tigers scoreless from the 3rd inning on. Milwood did dodge another bases loaded jam, this time in the 5th, Laird grounding out to end the threat. At that point, the Tigers had stranded 12 runners against the Mariners. And as we were so helpfully reminded by FSD's Mario Impemba, the Tigers' total of LOB had reached 38 over the past 5 games with the ground out.

With Verlander's pitch count on the high side, the 6th inning was going to be his last. It ended with his usual flourish, striking out Justin Smoak and Mike Carp. Verlander got the hook at 113 pitches, his streak of 6+ inning starts still alive at 49 straight. Fielder gave Verlander a parting gift in the top of the 7th, planting a Shawn Kelley fastball deep in the right field seats, extending the Tigers' lead to 6-3.

But the Tigers refuse to make anything easy. The Mariners got the run right back off of Phil Coke, thanks to his committing a cardinal sin; walking a .216 hitting number 9 hitter. Michael Saunders came around score via a wild pitch, ground out and single. No, it's never easy.

Joaquin Benoit entered the game in the 8th, and in a refreshing change for the Tigers' bullpen, had a 1-2-3 inning. Yes, there is such a thing.

With a 2 run cushion, Valverde took the mound to close out the game...and quickly issued a 4 pitch walk to the .130 hitting Carp. The light hitting Saunders proceeded to work a 3-2 count, Valverde's ball 4 finding the backstop. Deja vu, anyone?

All of which brought Ichiro to the plate when the game should have been over. Making matters worse, Ryan stole 2nd on Valverde, Laird never getting off a throw, the tying run now in scoring position. The Tigers then took the bat out of Ichiro's hands with an IBB, loading the bases for Jesus Montero.

Montero popped Valverde's 2-2 pitch into right field foul territory. Don Kelly drifted toward the seats down the line...where he, the ball and the wall all met at the same time. Kelly somehow made the catch (MLB.com video can been found here) and held onto the ball as he tumbled into the stands, making the game ending (and quite likely game saving) catch.

I'm too tired and drained to come up with much post game commentary at 1:30 in the AM. Plus, I think my heart stopped at least 3 times in the 9th inning.

I'll just add this. We're all relieved the Tigers bounced back after Monday's complete meltdown. It was a badly needed win. But will everyone please CALM DOWN? BYB comment threads will devolve into some combination of Hunger Games/Battle Royale/Lord of the Flies by June if we don't.

Justin Verlander: Even when Verlander isn't at his best, he's still better than most any pitcher around. 6 IP, 7 H, 3 ER, 6 K.

Don Kelly: It really was one Hell of a catch.

Miguel Cabrera: Hitting into some bad luck in this series, but an 0-5 night gets you a hiss.

9th innings: Will we ever see an easy one for this Tigers team ever again?

Home plate umpire Brian Knight: As to why, check out the above picture or just ask Jim Leyland.

GAME 28 PLAYER OF THE GAME

With 95%, Doug Fister was as dominant in the PotG voting as he was against the Mariners.