Share All sharing options for: Tigers 4, Yankees 3: Miguel Cabrera goes deep twice, but Omir Santos is the walk off hero

Miguel Cabrera crushed a pair of the longest home runs ever seen at Comerica Park, both landing just underneath the Chevrolet sign in the far reaches of center field. Hitting 1 ball deep into the Comerica ivy is amazing. To do it twice in the same game is unfathomable. Miguel Cabrera is a man amongst wee, tiny, weak lads. He doesn't just hit home runs, Cabrera sends majestic big flies to the outer reaches of our imagination.

Jose Valverde received credit for the win, not allowing a base hit...but hitting 2 batters, allowing 3 stolen bases, and walking home the game tying run. As if we needed another reason proving wins and losses should not a defining statistic for pitchers.

If there is one game this season I can't get on this team for damn near causing the fan base to riot, tonight is it. The Tigers took on the Yankees with a makeshift lineup and a one man bench. They are ravaged by injuries to the point of ridiculousness. Tonight's lineup was short one starting catcher and 2/3 of the starting outfield. The Tigers also suffered another injury to vital player tonight, Joaquin Benoit leaving the game with arm tightness.

Yet the Tigers still manged to claw out a win despite a crazy amount of adversity (some of it self-inflicted). It wasn't pretty, and Valverde nearly gave me a coronary, but it was a wild, fun (in hindsight) and badly needed victory. Even if took a pair of legendarily long home runs from a sure hall of famer, an RBI single from someone we had never heard of before last week and a game winning sac fly from a soon to be Toledo bound role player to get it.

So I'm going to take tonight's game as a sign of resiliency, of toughness, of never-say-die. It's better than the alternative, right?

A win is great, but the injuries keep piling up. Benoit was going to pitch the 8th inning, but was unable to continue due to what is being called tightness in his forearm. It cropped up after home plate umpire Bob Davidson called time as Benoit was in midst of throwing to the plate. Word is Benoit will have his arm "checked out." So on top of the bad calls, umpires are now trying to injure Tigers? OK, I admit I'm being facetious...or am I?

Omir Santos: You knock in the winning run, you get a roar. How many times this season have the Tigers have been left wanting because someone couldn't get enough bat on a ball for a sac fly with RISP? To his credit, Santos did. 1-2, game winning RBI.

Rick Porcello: Porcello was on his game tonight, forcing the Yankees to pound the ball into the ground. He deserved better than a no-decision. 6 IP, 6 H, 1 ER, 1 BB, 3 K.

Joaquin Benoit: Had to bail out Phil Coke in the 7th, and did so in style, tossing a hitless, scoreless inning. 1 IP, 0 R, 0 H.

Don Kelly: I have to give Kelly a shout out for his highlight reel leaping catch, robbing Mark Teixeira of a home run. As the things turned out, it was a huge run to deny.

Phil Coke: Faced 2 batters and didn't get an out.

Octavio Dotel: Relief pitchers need to throw strikes and field their position. Dotel had trouble with both tonight.

Jose Valverde: I need an antacid just thinking about Valverde's lack of command. But he didn't allow a hit!

FOX Sports: Look at the crawl at the bottom of the picture... 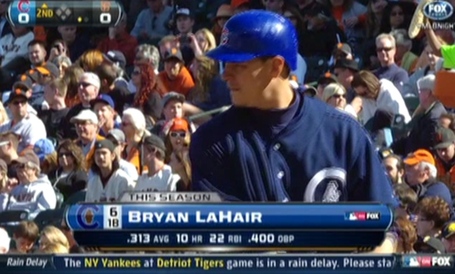 "Detriot" Tigers? The FOX crawl read "Detriot" for the entirety of the rain delay. Idiots.

GAME 52 PLAYER OF THE GAME: