On the day of Magglio Ordonez's retirement ceremony, the New York Yankees played spoilers by beating the Detroit Tigers 5-1. Phil Hughes won his 5th game of the season for the Yankees. Despite his streak of 6 plus inning starts reaching 54, Justin Verlander took the loss. Verlander has lost 3 consecutive games for first time since July/August of 2008

The season is officially 1/3 over. The Tigers stand 4 games under .500 with a 25-29 record. They are 5 1/2 games back of the Chicago White Sox as I write this post. Before we get all bent out of shape, and I agree there is plenty of reason to be, I ask you keep something in mind.

BYB commenter Singledigit posted the following (which I've slightly cleaned up for clarity) in the comments of the snap recap, putting the current situation in perspective. All Singledigit is saying all is not lost. Not by a long shot.

The LF is on the DL
The CF is on the DL
The C can’t play due to injury
The backup C can’t play due to injury
The starting 2B has been sent down
The number 2 starter is on the DL
The 3rd and 4th starters have been wildly inconsistent
The 8th and 9th inning bullpen options have been wildly inconsistent
The SS and RF haven’t yet hit nearly what they are capable of
The DH has been, well … nowhere near DH-ish
Our regular DH is out until Sept at the earliest
A valuable relief pitcher has been on the DL all season, without known return
Two bench players have been terrible at the plate

Did I miss anyone?

The Tigers have played arguably the roughest part of their schedule. Still a bit more to come, but not many stretches left where 19 of 24 games are on the road. They’ve played the majority of their games against the AL East.

Verlander hasn’t been Verlander for a few starts. Fielder hasn’t yet shown the power that he can. Miguel has had some stretches Tiger fans have never seen (0 for 21?)

I’m not saying the Tigers will run away with anything, but with all considered it’s easy to be optimistic. Ya just gotta be realistic first.

This brought out even more comments keeping the Tigers' current troubles in perspective.

The Tigers are in midst of a perfect storm of bad luck and injuries to core players, yet are only 4 games under .500. They have been the victim of a some atrocious umpiring, costing them at least the chance of winning a couple of games. The Tigers have 48 games left against the AL Central. Despite 2 off starts, Verlander has pitched better than he did up to this point in 2011. Don't forget owner Mike Ilitch is committed to doing whatever it takes to win. He'll be a buyer, not a seller, at the trade deadline.

Perspective. It's a good thing.

FYI: If you missed seeing the Ordonez retirement hoopla, a condensed version can be seen on FoxSportsDetroit.com, the full ceremony can be found at DetroitTigers.com)

For the nuts and bolts recap:

Here's something else to keep in mind. You'll often words "If the playoffs started today" thrown about by the media. It's completely meaningless. Just to be sure, I just double checked, and the playoffs don't start for 4 months. Meaning there is still time to fix what ails this team. The Tigers need to get healthy, then need to take care of business. That goes for off the field as well. We all know there are lineup holes which must be addressed. Trust me, Dave Dombrowski is well aware of them.

The Tigers' injury situation is beyond brutal. They had all of a 2 man bench today, double what it was last night. I grabbed a screen cap off the FSD broadcast to illustrate just how handicapped the team is by injury. The names in yellow are currently on the disabled list, the others day-to-day. 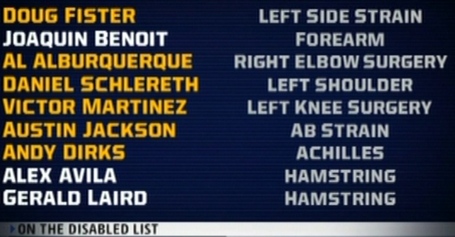 Alex Avila told the media he could catch, but can't run. Not good news. But Joaquin Benoit believes a couple days of rest should take care of his forearm issue. Gerald Laird is already on record saying he should be ready to play by Tuesday. Get well soon, guys.

Duane Below: Tossed 1 2/3 perfect innings, giving the Tigers a chance to get back in the game. Too bad they refused to do so.

Brayan Villarreal: You never know what you're going to get from Villarreal. Today, it was the good version of Villarreal, striking out 2 in an inning of work.

Jhonny Peralta: 1 of just 3 Tigers to have a base hit off of Phil Hughes, the only Tiger with 2 hits.

Justin Verlander: Admitted to the media after the game the late start caused by Ordonez's retirement ceremony left him "out of sync." Starting 8 minutes late ruined his 1st inning? Come on...

Tigers' team defense: What went down in the 5th and 7th innings is unacceptable...yet it happens far too often. But the way the Tigers are swinging the bat of late, a perfect day defensively wouldn't have made a difference.

Tigers' team offense: Jim Leyland was upset with his team in the post game presser for not making adjustments against Phil Hughes. He called it, "Not a good day of hitting." No kidding, skipper. You could make the same argument after damn near every game over the past 2 months.

GAME 53 PLAYER OF THE GAME:

2 tape measure home runs should win PotG every time. It did in this case, as Miguel Cabrera rocked 83% of the vote.