The Detroit Tigers extended their winning streak to season high 6 games, starting off the season's 2nd half by easily taking down the Baltimore Orioles 7-2. Doug Fister (3-6) tossed solid 7 innings to win his 3rd game of the season. Orioles starter Jason Hammel (8-6) was pulled in the 4th inning due to a knee injury, but his 2 runs allowed was enough to be tagged with his 6th loss.

Miguel Cabrera and Jhonny Peralta hit home runs for the Tigers, Brennan Boesch chipped in with a pair of hits and 2 RBI. Matt Wieters and Wilson Betemit had 2 hits each for the Orioles.

FYI: With MLB.TV being out of service for the majority of the game, I've added links to MLB video of all the Tigers' highlights so out of market Tigers' fans can get their fix. As if 5 days wasn't long enough to go without baseball...

The Tigers started off as if the All-Star break never happened. Austin Jackson began the 2nd half of the season with a lead off single. Cabrera and Prince Fielder followed with singles of their own to load the bases. With 2 out, Boesch had his first based loaded hit in 7 tries, lining a hard single to right to give the Tigers a 2-0 lead. You can click here to see the rare bases loaded knock.

The Orioles got on the board in the 3rd. Former Tiger Wilson Betemit doubled to left center with 1 out, the first hit off of Fister. Nick Markakis' ground rule double to center brought home Betemit. Fister limited the damage by striking out J.J. Hardy to end the inning.

The Tigers added to their lead in the following half inning after the Orioles pulled Hammel due to injury. Luis Ayala took over, and allowed back-to-back 2 out doubles from Alex Avila and Ryan Raburn, extending the Tigers' lead to 3-1. Those of you who have been waiting for 2nd Half Raburn to return, you can check it out here.

The Tigers broke the game wide open in the 5th, slugging their way to a 7-1 lead. Cabrera tried to knock down the wall behind the center field fence, pounding a massive big fly to the nether regions of Camden Yards, giving the Tigers a 4-1 lead. Cabrera's 19th home run of the season was conservatively estimated to have traveled 454 feet. It may have been as high as it was far, and you can see as much by clicking here.

The Tigers didn't stop there after Ayala was replaced by Dana Eveland. With 2 outs, Delmon Young and Boesch singled. Jhonny Peralta, who has recently rediscovered his power stroke, put the game out of reach by hitting an opposite field liner over the wall in right (You can see the bomb here). The 3 run shot was Perlata's 6th home run of the season, the 2nd straight game he's gone yard.

Quinitin Berry didn't have a hit, but still made an impact. He kept the lead at 6 runs by reaching over the left field fence to rob Betemit of a home run to end the 5th inning. You can see Berry's highlight reel grab by clicking here. From there on out, the Tigers and Orioles were playing out the string.

Jim Leyland decided Fister had done enough for one night, pulling him after 7 innings, placing the game in the hands of his bullpen.

Phil Coke and Joaquin Benoit combined for a scoreless 8th. The Orioles did tack on a 9th inning garbage time run off Octavio Dotel. After Dotel gave up an RBI single to Weiters, Leyland decided he had to use closer Jose Valverde for the final 2 outs. Unlike his last appearance, nearly giving away a game to Royals on Saturday, there was no drama from the Big Potato. He nailed down the victory with a minimum of fuss, needing only 6 pitches to start off the 2nd half on a victorious note.

Screen cap of the night:

Delmon Young runs the bases like he swings at bat...indiscriminately and without reason. Trying to advance on a pitch in the dirt in the 3rd inning, Young was out by the length of a Prince Fielder Home Run Derby bomb. 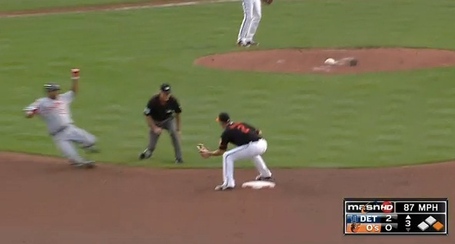 Miguel Cabrera: When you hit a ball so high and far air traffic control have to route airliners around it, you get a roar.

Jhonny Peralta: Peralta's 3 run shot made the remainder of the game relaxing, rather than a white-knuckle nail-biter, something we've become all too accustomed. Peralta's power outage ending bodes well for the Tigers' offense in the 2nd half.

Doug Fister: After looking like a pitcher who was rusty due to spending much of the season the disabled list, we saw the 2011 version of Doug Fister tonight. Please welcome back the Tigers' dominant number 2 starter! Fister was all that and more, allowing just 1 run and 3 hits, while striking out 8 in 7 innings of work.

MLB.TV: The Tigers started the 2nd half of the season where they left off in the 1st half, but out of market fans had no idea what was happening in Baltimore...or anywhere else, for that matter. MLB.TV was down for the vast majority of the game, the feed not going live until the 8th inning. There was a near riot on Twitter from Tigers fans venting their frustration over missing such rarities as RBI hits from Boesch and Raburn. Apparently there was some sort of catastrophic hardware failure on MLB.TV's "primary and secondary systems." You can learn more at the MLB.TV forums.

GAME 87 PLAYER OF THE GAME

We have to go all the way back to last Sunday, when Max Scherzer tossed 7 innings of 1 run, 5 hit ball to beat the Royals. Scherzer's performance earned 66% of the BYB vote.