Orioles 8, Tigers 6: Bullpen blows a pair of save opportunities, Orioles walk off with 2 home runs in 13th

Share All sharing options for: Orioles 8, Tigers 6: Bullpen blows a pair of save opportunities, Orioles walk off with 2 home runs in 13th

The Baltimore Orioles snapped the Detroit Tigers' 6 game winning streak in dramatic fashion. J.J. Hardy and Taylor Teagarden both hitting home runs in the 13th inning, giving the Orioles an 8-6 come from behind victory. Kevin Gregg (3-2) only pitched 1/3 of an inning in relief, but being the 8th and final Oriole to pitch was was enough for the victory. Joaquin Benoit (1-2), the 8th Tigers pitcher of the afternoon, was tagged with both a blown save and the loss.

Miguel Cabrera and Quintin Berry had 3 hit apiece for the Tigers. Robert Andino joined Hardy and Teagarden in the home run parade for the Orioles.

The Tigers got on the scoreboard first, taking a 1st inning lead for the 2nd straight game. Austin Jackson led off with a walk, advanced to 3rd on a pair of ground outs, and scored on Prince Fielder's double.

That was the extent of the Tigers' offense for the next several innings.

Unlike last night, the Tigers could not hold on to their early lead. Lead off man Nick Markakis doubled, then bunted over to 3rd. Long-time Tiger Killer Jim Thome just missed a home run, doubling off the left field fence to bring home Markakis, tying the game at 1-1.

The Orioles grabbed the lead in the bottom of the 2nd, Scherzer allowed a lead off single to Chris Davis. The inning looked to be headed nowhere, but with 2 outs Scherzer badly missed his target. Gerald Laird set up on the outside part of the plate, Scherzer's pitch tailed inside, right into .232 hitting Robert Andino's wheel house. The number 9 hitter lined Scherzer's mistake into the left field seats, his 5th home run of the season giving the Orioles a 3-1 lead.

The Orioles tacked their 4th run thanks to the Tigers' inability to turn a double play. With 1 out and runners on 1st and 3rd, Davis hit a ground ball to 2nd. With Santiago and Peralta moving like they were wearing cement overshoes, Davis was able to beat the throw to 1st. Instead of an inning ending 4-6-3 double play, it was a 4-6 RBI fielder's choice.

Scherzer was pulled after 5 innings and 94 pitches. Duane Below did what he does best, keep the Tigers in games. Below tossed 2 scoreless innings, the only hit being of the infield variety off of Fielder's glove.

After Fielder doubled in the 1st inning, Chen put down 15 straight Tigers.The Tigers didn't have another base runner until Ramon Santiago worked a walk with 2 out in the 6th. Miguel Cabrera followed with a walk, but Fielder popped up to end the slight threat.

Quintin Berry gave us a glimmer of false hope in the 8th, legging out a lead off infield single. and advancing to 2nd on a wild pitch. Hope went bye-bye as Berry made a God awful decision, trying to take 3rd on Jackson's ground ball to short. He was an easy out, almost as easy as Delmon Young last night. 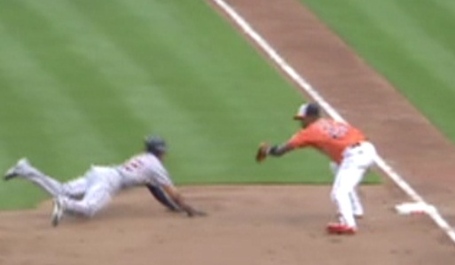 Making the 8th inning just that much more frustrating, the Orioles got out of the inning by (GASP!) turning a slick 4-6-3 double play on Cabrera's ground ball.

Darin Downs replaced Below, and proceeded to walk the bases full in the 8th. He got out of the 1 out jam by inducing Markakis to ground into (GASP!) a 4-6-3 double play. I'm just as stunned as you are...

Orioles closer Jim Johnson has 26 saves. He entered the game in the 9th inning looking for save number 27. He's still looking.

Leading off, Cabrera singled. With 1 out, Young hit a double play ball to 3rd....but defensive replacement Ryan Flaherty whiffed, everyone safe. Peralta followed with a single up the middle, Cabrera rumbling home. Brennan Boesch, who had entered the game for Ryan Raburn in the 7th, lined a double into the right field corner. Young scored, the game tying run now at 3rd. Unfortunately, pinch hitter Alex Avila was fooled on what would have been ball 4, striking out on pitch at his ankles.

But what Berry taketh in the 8th, he giveth in the 9th. First pitch swinging with 2 out, he lined a single to left, pinch runner Danny Worth scoring easily. But Gene Lamont got greedy (or is blind), and waved Boech home. It was not the smartest of decisions... 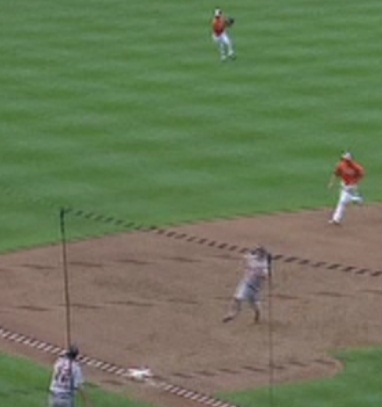 Orioles left fielder Endy Chavez already had the ball in his glove, preparing to throw, while the slow of foot Boesch had yet to reach 3rd base. The play ended as you would expect. Boesch was out by 10 feet. 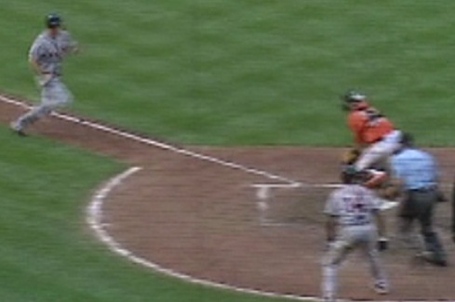 With Boesch dead to rights (along with Luis Marte and Phil Coke combining for a scoreless bottom of the 9th), on we went to extra innings.

Coke immediately got into trouble in the bottom of the 10th. How? The dreaded late game lead off walk, this one issued to Matt Wieters. Pinch runner Steve Pearce was sacrificed to 2nd. The Tigers gave Mark Reynolds a free pass, setting up the double play. You have to love it when a plan comes together, pinch hitter Steve Tolleson hitting into a 5-3 double play, nicely turned by Cabrera.

Fielder and Young started the 11th with back-to-back singles. Danny Worth was asked to bunt...and failed (It's not the first time with Worth, you would think Jim Leyland would remember), popping up. Orioles rookie pitcher Miguel Socolovich was unable to make the diving catch, but it didn't make a difference, as Fielder had to hold up. The big man was forced at 3rd. Boesch then beat out a double play ball, giving the Tigers runners at the corners with 2 out.

Avila struck out in the 9th with RISP. Turns out the 2nd time was the charm. After taking what looked like strike 3, Avila lined an RBI single to center off reliever Troy Patton. Young crossed the plate to give the Tigers a 5-4 lead. It didn't go exactly as planned (took a failed sac bunt and a force play to get a runner to 3rd), but a lead is a lead.

In the bottom of the 11th came the 2nd save attempt of the day, Jose Valverde taking the mound for the Tigers. The Big Potato immediately put a scare into Tigers fans, falling behind 3-0 to Andino. But Papa Grande got the out on a fly to right. But drama is Valverde's middle name, Markakis doubling with 1 out. Potato got J.J. Hardy to strike out, but who was on deck with 2 out and a RISP?

Papa Grande gave Thome an unintentional intentional walk, bringing up the O's cleanup hitter, Adam Jones. Jones didn't hit the ball hard, but he hit it where they ain't. His looper into short left tied the game at 5 all.

Top of the 13th, Worth doubled with 1 out, advancing to 3rd on a wild pitch. Needing to get his bat on the ball, Don Kelly struck out on a 3-2 pitch. But Avila worked a walk, putting 2 runners on the pond for Berry.

Cue FOX analyst Billy Ripkin: "If you want to get the game winner, don't hit toward center."

Berry didn't listen to the lesser Ripkin, ripping an RBI single to center. Worth scored, giving the Tigers a 6-5 lead. Could they hold the lead this time? It would be up to Joaquin Benoit to lock down the win. But the Orioles had a key.

With 1 out, Benoit faced Hardy, who was 0 for his last 28. He's now 1-29, taking Benoit deep to left, a high fly hugging the left field line all the way over the left field fence. The 3rd blown save of the day evened the game at 6-6.

With 2 out, Beniot plunked Jones with a change up. The immortal Taylor Teagarden, hitting .000 on the season, then took Benoit yard, a 2 run home run ending the 4:43 marathon in miserable fashion.

The Tigers' winning streak ends in the most painful way possible; a come from behind loss, with Valverde and Benoit both blowing saves. An opportunity wasted, as the Royals are beating the White Sox. The Tigers now stand at 45-43 on the season, 4 games out 1st place.

It was an awful loss, but it's only 1 game. A platitude, sure. But it's true. If the Tigers can win tomorrow with Justin Verlander on the mound, I'll be more than happy with their taking 2 of 3 on the road to open the 2nd half.

Screen cap of the day:

Fielder dives into 2nd base, hits 8.9 on the Richter scale. 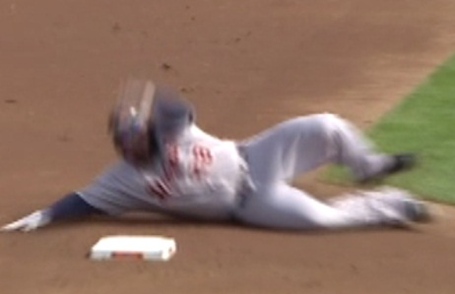 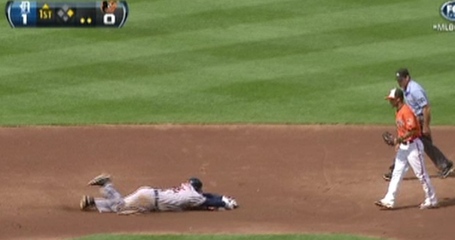 Duane Below: If Below doesn't shut down the Orioles in the middle innings, the game doesn't get to extras.

Jose Valverde: The cries from fans to make Jaoquin Beniot the Tigers' closer are getting louder. It'll never happen, but it won't stop the braying.

Jaoquin Benoit: But Benoit blowing the save, allowing a pair of home runs in the 13th inning, just might.

GAME 87 PLAYER OF THE GAME: