Behind the arm of Justin Verlander, the Detroit Tigers moved to within 1/2 game of 1st place in the AL Central by beating the Chicago White Sox 4-2. Verlander allowed 2 runs in 8 innings, winning his 11th game of the season. White Sox starting pitcher Jake Peavy went toe-to-toe with Verlander for much of the game, but was tagged with 4 runs. Peavy took the loss, his 7th of the season. Jose Valverde converted his 18th save of the season for the Tigers.

Miguel Cabrera, Prince Fielder and Jhonny Peralta each had a pair of hits for the Tigers. Alejandro De Aza supplied all the offense for the White Sox with his 6th home run of the season.

Things looked bleak early on for the Tigers. Peavy was lights out, pounding the strike zone, striking out the first 5 Tigers he faced. The streak came to an end when Brennan Boesch (hitting .366 with a 1.029 OPS for July) did more than just get his bat on the ball, doubling to right center. Boesch was stranded, but the ice was broken. Regardless, it was clear Peavy was on his game. .

Making things even more nerve-wracking for Tigers fans was Verlander allowing a pair of runs in the 3rd. With a man on and 1 out, De Aza hit a mistake pitch (a 95 MPH fastball down the middle of the plate) well into the right field seats, giving the White Sox a 2-0 lead.

But the Tigers got those runs back, and then some, in the following half inning.

Peralta, who has regained his power stroke, slugging .500 over the past 3 weeks, found the gap in left center for a lead off double. Ramon Santiago's liner to right was trapped by Alex Rios, fooling Peralta, holding him at 2nd.. After threatening to bunt (GAH!), Austin Jackson grounded into an easy 6-4-3 double play. Between Peralta being caught in no-man's land and the double play, any shot at a rally was over, right? Wrong.

The Tigers have had a knack for 2 out rallies as of late, tonight was no exception. Quintin Berry kept the inning alive by getting hit by a pitch, setting the table for the Tigers' big guns. Cabrera worked a 3-2 count, then lined an RBI single to center. Fielder followed up with an RBI single of the seeing eye variety. The pair of 2 out hits (Ed.: and an RBI double from Delmon Young) from the middle of the Tigers order gave them a 3-2 lead.

The pitcher's duel was then on, Verlander and Peavy exchanging scoreless innings. Peavy set down 10 consecutive Tigers at one point. It took a while for Verlander to lock into beast mode, not getting his first 1-2-3 inning until the 5th. But as the night continued, Verlander became dominant, allowing only 1 hit after De Aza went yard.

With the Tigers badly in need of an insurance run, they finally got to Peavy in the 7th. Jackson is in his first real slump of the season, hitting .179 in the 7 games coming into tonight's game. He didn't look any better in his first 3 at bats, going 0-3 with 2 strikeouts. But with Peralta on 3rd with 2 out in the bottom of the 7th, Jackson lined a single to left, giving the Tigers that needed insurance run and a 4-2 lead.

Verlander got the handshake of doom from Jim Leyland after a 1-2-3 8th inning. The ace ending his evening with 121 pitches, 4 hits, 2 runs and 6 strike outs. Just another night at the office for Justin Verlander.

Valverde came on in the 9th to close out the meat of the White Sox's order, Kevin Youkilis, Adam Dunn and Paul Konerko. Yes, I had the antacid nearby. But there was NO DRAMA...until Konerko hit sinking liner to left with 2 out. Of course, Berry made a great catch to end the game, laying out to snag Konerko's looper. I mean, how else would you expect the game to end but on a play by ThunderClap?

The Tigers have not been in 1st place since May 1st. They could take it back from the White Sox with a win tomorrow afternoon.

And the winner of Fox Sports Detroit nickname poll for Quintin Berry is... 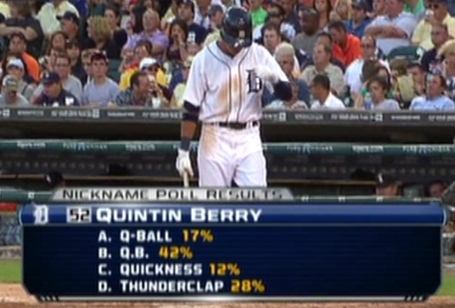 Berry's initials? Seriously? Lame, much like the poll. We made fun of FSD's attempt at giving Quintin Berry a nickname on this week's BYB podcast, for good reason...though ThunderClap has potential for the double entendre possibilities. This whole thing is moot, anyway. The BYB community has already decided it's Q-Bert.

Justin Verlander: It's a given. When Verlander starts, he gets a roar.

Jhonny Peralta: Was a big part of the offense with 2 hits and 2 runs scored.

Miguel Cabrera: He's good at baseball. Though I'm a tad concerned over his coming up lame in the 8th.

Hawk Harrelson: CRAM IT, HAWK! I feel for those of you who had to suffer through the White Sox broadcast.

Not tonight. Hisses will harsh my mellow.

GAME 93 PLAYER OF THE GAME:

Shutting down the Los Angeles Angels on 3 hits and 9 strikes outs made Max Scherzer a no-doubt PotG with 92 % of the voite.