Rick Porcello tossed 8 innings of 1 run baseball, pitching the Detroit Tigers into 1st place in the AL Central by taking down the Chicago White Sox 7-1. Chis Sale allowed 5 runs on 7 hits, losing only his 3rd game of the season.

The Tigers' offense was paced by Austin Jackson's 2 hits and 4 RBI, along with Brennan Boesch's home run and 3 RBI. The lone White Sox run scored on Dayan Viciedo's RBI single.

Going by his last 2 starts (2 no-decisions and a 7.71 ERA), I doubt anyone expected Porcello to be part of a pitcher's duel with Sale. But that's exactly what happened. Both Porcello and Sale had their good stuff, especially in the early innings.

Porcello held the White Sox hitless through 4 innings. Sale was almost as good, allowing just an infield single by Jhonny Peralta in the 2nd inning.

The Tigers threatened without benefit of a hit in the 3rd. Sale walked Gerald Laird and Danny Worth to start the inning. But the rally ended before it could start, as Jackson struck out and Ryan Raburn grounded into an easy double play.

The White Sox got off the schneid in the 5th, taking a 1-0 lead without benefit of a hard hit ball. Paul Konerko broke up Porcello's no-hitter on a dribbler which found the hole between 1st and 2nd. Alex Rios then hit a slow roller to short, but Worth dropped the ball on the exchange. Konerko was out, but Rios was safe. Despite the cries of "OMG MOAR BAD DEFENZE," on the social networks I doubt the Worth could have turned the double play anyway.

With 1 on and 1 out, the White Sox called a hit and run, sending Rios. It kept the inning alive, as A.J. Pierzynski hit a tailor made double play ball to Worth. But Rios beat the throw to 2nd, Peralta getting the most hated man in baseball at 1st. Rios then came around to score when Viciedo's dying quail dropped for an RBI single.

But the Tigers continued their penchant for 2 out rallies in the bottom of the inning, getting he run back, and then some. With 2 out and no one on, the killer duo of Laird and Worth singled. Jackson proceeded to clear the bases by doubling in the right center gap, giving the Tigers a 2-1 lead.

Question: How do you crush the will of the opposition? Answer: With 2 out RBI hits and 3 run home runs. In the bottom of the 6th, Boesch gave us the best of both.

Miguel Cabrera led off the inning with a single, then stole 2nd (without a throw, of course) with 2 out. With 1st base now open, Peralta worked a walk. Boesch then crushed a breaking ball from Sale, sending it deep into the right field seats. Boesch's 10th home run of the season gave the Tigers a 5-1 lead.

While the Tigers were busy scoring with 2 out, Porcello was mowing down White Sox batters. He set down 7 straight after Viciedo's RBI single. The streak ended in the 8th when the much hated Pierzynski led off with a single. But Porcello was dealing, inducing Viciedo to hit a tailor made double play ball...which the Tigers actually turned!

The Tigers pushed across a pair of insurance runs in the 8th. Jackson's 2 out bases loaded single bringing home Peralta and Laird.

Jim Leyland allowed Porcello to start the 9th inning, keeping him on a short leash as he went for the first complete game of his career. The leash went taut after Porcello gave up a pair of singles to start the inning. Leyland pulled Porcello as he received a huge ovation from the sellout crowd at Comerica Park.

Porcello gave way to Joaquin Benoit, who immediately got out of trouble. Kevin Youkilis (who is having an awful series, 0-8 with 5 K) grounded into a 5-4-3 double play and Adam Dunn struck out to end the game.

Game over. The White Sox's reign at the top of the AL Central was also over, the Tigers moving back into 1st place for the time since May 1st.

But the story of the game was the dominance of Rick Porcello, out-dueling All-Star Chris Sale. Leyland said as much after the game:

Rick was going to have to be stingy today for us to win this game. And he was more than that. He was great."

Screencap of the day:

You can actually pinpoint the second when Boesch rips Sale's heart in half....annnnd NOW! 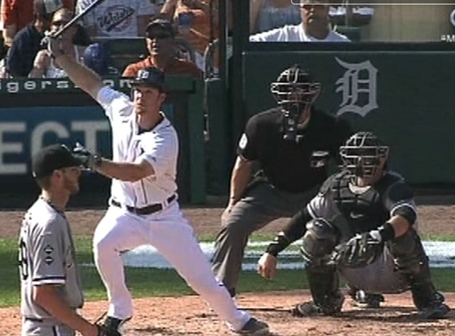 Austin Jackson: His 1st RBI hit was a big one, a 2 out double to give the Tigers the lead. His 2nd RBI hit was just icing on the cake.

Brennan Boesch: His 1 hit was huge, a 2 out, 3 run home run to put the game out of reach. Ever since word came out Nick Castellanos was working out in right field, Boesch has been hitting the cover off the ball. Coincidence?

Jhonny Peralta: Peralta was also 2-3 with a 2 runs scored. His bat has really come alive as of late.

Ryan Raburn: He did have a hit, but was also the final out of an inning 3 times, all with runners on base.

Thom Brennaman: FOX's play-by-play man had White Sox on the brain when Peralta made a great play in the 6th, throwing out Gordon Beckham from deep in the hole: "What a play by Alexei Ramirez!!!"

GAME 94 PLAYER OF THE GAME:

Could have it been anyone other than Justin Verlander? As a matter of fact, no. Verlander took 89% of the BYB vote.