Behind the bat of the newest member of the 300 home run club, Miguel Cabrera, the Detroit Tigers beat the Chicago White Sox 6-4, sweeping the 3 game weekend series. Rookie Jacob Turner (1-1) recorded the first win of his young career, allowing 3 runs in 5 1/3 innings. Joaquin Benoit stepped in for Jose Valverde as closer, nailing down his 2nd save. Phillip Humber (4-5) allowed 4 home runs and 7 runs in his 3 innings of work, taking the loss for the White Sox.

Cabrera led the Tigers on offense, homering twice, giving him 23 on the season and 300 for his career. Quintin Berry (2) and Brennan Boesch (11) also went deep for the Tigers. Kevin Youkilis (9) and Alex Rios (14) hit home runs for the White Sox.

The White Sox opened the scoring, giving the Tigers a dose of their own 2 out hit medicine. With 2 out, consecutive singles from Adam Dunn, Paul Konerko and Rios gave the White Sox a 1-0 lead.

If you go by their response, all that did was make the Tigers angry.

Austin Jackson opened the bottom of the 1st by working Humber for a 10 pitch walk. Berry then muscled up, taking a Humber fastball over the wall in left. Miguel Cabrera didn't need to muscle up, drilling another fastball to deep left center, clearing the wall near the flagpole. The back-to-back home runs gave the Tigers a 3-1 lead. The Tigers tacked on 2 more hits before a double play got Humber out of the inning.

The Tigers' punishing of Humber continued in the 3rd. With 1 out, Cabrera crushed a monstrous, massive, huge big fly toward the Comerica Park shrubbery, the now lopsided ball landing in the camera well in dead center. The solo shot was his 2nd of the game, 23rd of the season and 300th of his career. (Click here to see Cabrera's 300th career home run)

But the Tigers had yet to score with 2 out. The streaky Brennan Boesch made sure it happened. After the commotion following Cabrera's 300th dinger had ended, Boesch got the crowd fired back up, hitting a 2 run shot to deep right center to give Turner a 5 run cushion at 6-1.

All the angst over Turner's last start, allowing 7 runs and 3 home runs against the Angels on Monday, seemed silly today. Turner was excellent, setting down 11 consecutive White Sox through the middle innings. But 1 mistake pitch to Rios with 1 out in the 6th, resulting in a 2 run home run just clearing the left field wall (after video review), ended his afternoon.

Turner left the game in line for his first big league victory, hoping the bullpen could nail it down. Brayan Villarreal took over in the 6th, allowing a pair of hits before getting out of mild trouble.But the White Sox continued to hang around, the Tigers unable to tack on insurance runs.

Phil Coke took the mound for the first time as a father in the 7th. In was an inauspicious return. Kevin Youkilis broke out of a series long slump with a solo home run. What had once been a comfortable 6-1 lead was now a nerve-wracking 6-4 game.

Jim Leyland had seen enough after Coke walked Dunn, calling for Octavio Dotel. Dotel quickly put out the fire, striking out Konerko and Rios to end the inning with a minimum of damage. Dotel continued his dominance with a 1-2-3 8th.

Jose Valverde was unavailable, so Joaquin Benoit was closer for a day. No Big Potato, no problem...and more importantly, no drama. Benoit set the White Sox down 1-2-3 for his 2nd save of the season.

The struggles of the first 3 months are quickly being forgotten. This is the Tigers team we expected to see all along. Let's hope they continue to play this well, as the Tigers leave town for 9 games against the Indians (who are 4 games back of the Tigers), Blue Jays and Red Sox, 3 teams teetering on the edge of falling below .500.

Andy Dirks is starting his injury rehab by playing center and batting 3rd for the Mud Hens tonight. If all goes well, expect Dirks back in Detroit by next weekend.

Screencaps of the day:

The captures are all about Cabrera's 300th big fly. The first is FSD's shot of the giant scoreboard in left after Cabrera went deep for the 300th time, the 11th youngest player in history to do so.. 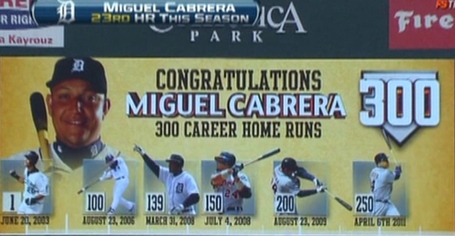 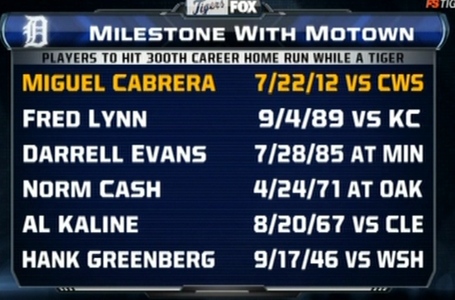 Jacob Turner: Nice bounce back start after imploding on Monday. So what's Truner's value as a prospect again? (looks at Jon Paul Morosi)

Miguel Cabrera: When does the MVP talk start? If it hasn't, it should.

Octavio Dotel: With the White Sox desperately trying to rally, Dotel got the biggest outs of the game. He retired all 5 White Sox he faced, 4 via strike outs.

Brennan Boesch: Has hit big home runs the past 2 days. He looks like an entirely different player than the one fans were ready to send to Toledo a month ago.

Quintin Berry: His 1 hit couldn't have come at a better time, immediately after the White Sox had taken an early lead.

I don't feel right handing out hisses to Tigers after a dominant home stand. But I have no qualms handing one to this clown...

Hawk Harrelson: It's being said on Twitter the White Sox play-by-play man said this after the loss: "We didn't even face any good pitchers this series, we beat ourselves." Could he be any more despicable?

GAME 95 PLAYER OF THE GAME:

For pitching the Tigers into 1st place with an 8 inning gem, Rick Porcello was rewarded with 89% of the BYB vote and a PotG wim.