Blue Jays 8, Tigers 3: Miguel Cabrera and Prince Fielder were good, the rest of the Tigers...not so much

Share All sharing options for: Blue Jays 8, Tigers 3: Miguel Cabrera and Prince Fielder were good, the rest of the Tigers...not so much

The Toronto Blue Jays took the first game of their weekend series with the Detroit Tigers in easy fashion, 8-3. Blue Jays starting pitcher Carlos Villanueva (6-0) remained undefeated, pitching 5 innings for the victory. Rick Porcello (7-6) pitched well in 5 of 6 innings. But 1 bad inning was enough to hang the loss on the young Tigers starter.

The Tigers made a statement in the opening inning, hitting back-to-back jacks. With 2 out, Miguel Cabrera drilled a fastball into the seats in left, the long home run was his 25th of season. Prince Fielder followed, saw an 0-1 breaking ball, and hit a bomb over the wall in center. The meat of the order gave the Tigers a quick 2-0 lead.

The Blue Jays didn't hit Porcello nearly as hard as the Tigers hit Villanueva, but they still countered with a run. Omar Vizquel singled with 1 out. Porcello then broke Edwin Encarnacion's bat, but he still managed to hit a dribbler between 1st and 2nd into short right for an RBI single.

Porcello was then on cruise control for 3 innings, the Blue Jays pounding his sinker into the turf for easy ground ball outs. Things were looking up! Then came the 4th inning...

The Blue Jays sent 8 men to plate, scoring 4 runs after 2 were out. The big hit was a bases clearing double just over the head of Quintin Berry off the bat of light hitting catcher Jeff Mathis. To end the inning, Berry needed to be 4 inches taller. Barring that, Porcello can't allow the bottom of the Blue Jays order to beat him.

With the Blue Jays up 5-2, the Tigers followed up by getting a runner on base in each of the next 3 innings...

Berry singled with 2 out in the 5th...stranded.

Young singled to lead off the 6th. He was eliminated on a Brennan Boesch fielder's choice, who was then...stranded.

Omar Infante had an infield single with 1 out in the 7th...stranded.

It was one of those games.

Back to the Tigers' offense, or should I say, Cabrera and Fielder. Cabrera led off the 8th with a double, coming around to score on Fielder's single. It was a bang-bang play at the plate, Cabrera looked to have slid in just under the tag. Blue Jays fans disagreed, vociferously. Unfortunately, the Bobsey Twins, Young and Boesch, went down meekly, a foul pop to 3rd and striking out respectively. Jhonny Peralta joined Boesch's K parade to end what started off as a promising inning.

Any chance of a comeback ended in the bottom of the 8th. With Duane Below pitching in relief, the Blue Jays' number 7 hitter, Travis Snider, took Below deep to right center for a long 2 run home run. his 3rd of the season. Impressive. Only 3 home runs are impressive? It is when you consider Snider has played in only 7 games in 2012.

The Tigers went down with little fuss in the 9th, 1-2-3. An ugly losing cherry on top of last night's crappy sundae of a loss. Though Porcello was his usual mystifying self, 1 lousy inning ruining his night, pin most of the blame on the offense...Cabrera and Fielder excluded.

A big trade was consummated during the game. Zack Greinke is back in the AL, having been acquired by the Angels.

Cabrera makes the call for the umpire...SAFE! 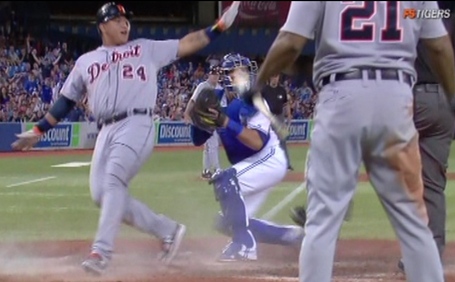 Quintin Berry: 2 more hits for the best hand clapper in the big leagues.

Jhonny Peralta: Was 1 worse than Boesch, 0-4 with 3 strike outs.

GAME 99 PLAYER OF THE GAME:

Thanks to Justin Verlander imploding, Austin Jackson became the runaway PotG winner with 88% of the vote.