Newly acquired starting pitcher Anibal Sanchez had an disappointing American League debut, serving up 3 home runs as the Detroit Tigers fell to the Toronto Blue Jays 5-1. Henderson Alvarez (8-7) threw 7 innings of 1 run ball to take the victory. Sanchez (0-1) went 6 innings, allowing all 5 runs on 8 hits to take his first loss as a Tiger.

Edwin Encarnacion, Yunel Escobar and Colby Rasmus all went deep for the Blue Jays, Rasmus leading the way with 2 hits and 3 RBI. The Tigers offense was supplied by Brennan Boesch, with 2 hits and an RBI.

You had a feeling it was going to be one of those games after the 1st half inning. Austin Jackson hit an Alvarez fastball on the screws...but right at Blue Jays 3rd baseman Brett Lawrie. With 2 out, and Miguel Cabrera off on the pitch, Travis Snider went for an all or nothing play on Prince Fielder's looper to left. He laid out and made a diving, sno-cone catch, saving a run.

Sanchez got off to an impressive debut, striking out the first 2 batters he faced. Things went smoothly for the newest Tigers starter until the 3rd.

The Blue Jays started the inning with back-to-back singles from Yan Gomes and Anthony Gose. Rajai Davis laid down a sacrifice bunt, but Sanchez got a nice jump off the mound and fired a strike to 3rd to nail the lead runner. A pitcher who can field his position? On the Tigers? What a concept!

Getting the lead runner at 3rd only delayed the rally. The Tigers penchant for allowing base runners to run wild reared its ugly head, Gose taking 3rd on a wild pitch and Davis stealing 2nd without a throw The wild pitch ultimately bit Sanchez, as what would have been a normal fly ball out off the bat of Rasmus became a sacrifice fly instead.

The Tigers tied the game in the 4th with an unexpected 2 out uprising. Delmon Young singled, and scored from 1st on Boesch's double in the left center field gap. But Jhonny Peralta, having an awful offensive series, struck out to end the inning.

Sanchez gave back the lead in the bottom of the 4th, serving up a gopher ball to Edwin Encarnacion, a no-doubt solo shot over the 375 mark in right center. The Blue Jays were back up 2-1.

It was deja vu all over again in the 6th, Escobar sending Sanchez's first pitch of the 6th to the far reaches of center field, another no-doubt solo home run giving the Blue Jays a 3-1 lead.

The bottom of the 7th was more of the same. Another inning, another gopher ball. The only difference being Sanchez allowing not a solo home run, but a 2 run shot off the bat of Rasmus to put the Blue Jays up 5-1.

While the Blue Jays were busy going yard, the Tigers failed to heed Jim Leyland's pregame rant about the need to score runs. After Boesch's double, all the Tigers could muster over the final 5 innings were 3 measly walks. Game over.

I'm just as disappointed by Sanchez's debut as you are, but just as much blame for the loss has to be pinned on the shoulder's of the Tigers' non-existent offense. But Sanchez showed flashes of what he's capable of, and as the season continues I'm sure we'll see him settle in and win games. But how many games he can win will be in question with the offense having gone back into hibernation. If Dave Dombrowski needed any more reasons as to why he needs to acquire a bat, the last 2 games would be it.

"When we were in Cleveland, we had guys on the bases all (expletive) night long in the first game or so. We didn't knock 'em in. It's that simple. That's why (Miguel) Cabrera and (Prince) Fielder are stars. They knock in runs."

So what came of the rant? 1 (expletive) run. The Tigers didn't listen to their quite irritated skipper.

Screencap of the game:

Despite his being right on top of the bag, somehow the 2nd base umpire Gary Darling didn't call Encarnacion out for passing the lead runner (Lawrie) on this play in the 7th. Leyland disputed the missed call, but it fell on deaf ears...not surprising, considering his already blind eyes. 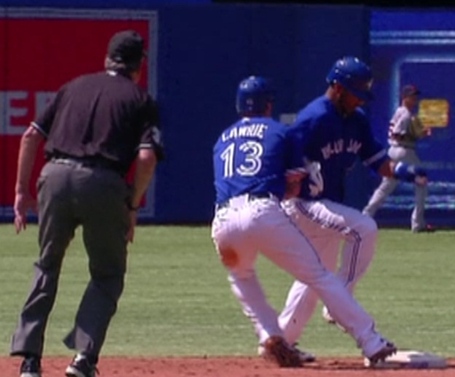 Olympic Games spoiler alert: Swimmer Ryan Lochte won the first gold medal for the US, winning the 400 IM. Of course, NBC thinks it's in our best interest to not televise it live, unlike the rest of civilized WORLD.

Brennan Boesch: The only Tiger to have more than 1 hit, along with the only RBI and extra base hit.

Delmon Young: His 4th inning single led to the Tigers' only run of the game. As you can tell, there's little to pick from today.

Anibal Sanchez: For all the good we saw in his first appearance for the Tigers, it was completely undone by allowing 3 home runs in 6 plus innings.

Jhonny Peralta: Another ugly game at the plate, 0-4 with a pair of Ks. Peralta has struck out 5 times in series.

For the 3rd hiss, take your pick from Quintin Berry, Alex Avila, Omar Infante and Ryan Raburn. All failed to get on base, going hitless nor drawing a walk.

With 53 % of the BYB vote, Miguel Cabrera gets the nod over Prince Fielder.