The Detroit Tigers salvaged the final game of their weekend series against the Toronto Blue Jays with a 4-1 victory, ending their 4 game losing streak. Doug Fister (5-7) tossed 8 innings of 1 run ball for win. Jose Valverde posted his 20th save of the season. Jhonny Peralta accounted for all the Tigers' scoring with 4 RBI off a pair of home runs, numbers 7 and 8 on the year.

Blue Jays starter Brett Cecil (2-4) was dominant for long stretches, but one mistake pitch to Peralta was enough to give him the loss. Colby Rasmus drove in the sole Blue Jays run.

The game got off to a disconcerting start for the Tigers, the Blue Jays taking a lead without benefit of a hard hit ball. Rajai Davis led off with a broken bat single, a looper just over head of a leaping Perlata. Davis stole 2nd, advancing to 3rd when Gerald Laird's throw was not money, bouncing into center field. Davis scored on a dribbler to 3rd off the bat Rasmus.

Peralta made up for his lack of a vertical leap in the 2nd, giving the Tigers the lead in process. Delmon Young led off with his 4th walk in 5 games. (Shocking, I know!) Ryan Raburn followed with a long double to left, missing a home run by a couple of feet. Raburn may have fell short, but Peralta didn't, busting out of an 0-17 slump by blasting a 3 run home run to deep left, giving the Tigers a 3-1 lead.

Runs then became scarce for the next couple of hours. A pitcher's duel ensued, Britt Cecil mowing down Tigers while Doug Fister would pitch into, then out of, trouble.

After setting down 8 consecutive Tigers, Cecil pitched out of a 2 on, 1 out jam in the 5th, striking out Miguel Cabrera and Prince Fielder popping out. After 7 more Tigers had been set down, Austin Jackson worked a base on balls with 2 out in the 7th. He was quickly dispatched back to the dugout, thrown out trying to steal.

The Blue Jays were slightly more successful against Fister, but couldn't close the deal for the want of a 2 out hit. With runners in scoring position with 2 out in the 3rd, 4th and 5th innings, the Blue Jays couldn't deal the death blow, each threat ending in frustration with an easy put out.

Fister got better as the game progressed, allowing just 1 base runner in his final 3 innings of work. Fister's workday ended after 8 innings, posting his 4th straight quality start.

Peralta added an insurance run in the 9th, going yard off of Blue Jays reliever Joel Carreno with 2 out in the 9th. Those 2 out RBI are killer....

Called on to close out the Blue Jays, Valverde's fastball was on, meaning there were no need for antacids or defibrillators. Potato ended the game in most undramatic 1-2-3 fashion.

Cue the end of a 4 game losing streak and the Big Potato dancing!

The Tigers now head to off to Boston for 3 games with under .500 Red Sox.

Screencap of the day:

I'm guessing these are Tigers fans on the edge of CN Tower after the cats lost the first 2 games of the series. DOOOOOM. 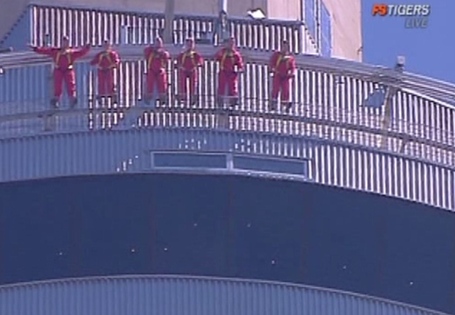 In case you missed it: The White Sox countered the Tigers big trade by acquiring -- drum roll, please -- Francisco Liriano from the Twins. Odds are Liriano works out as well for them as the Aubrey Huff and Jarrod Washburn deals did for the Tigers in 2009.

Doug Fister: How do you win games when the offense is in a deep funk? Your starting pitcher throwing an 8 inning, 7 hit, 1 run, 9 K gem.

Jhonny Peralta: Peralta was having a God awful series and in a massive slump. Hitting a 3 run bomb in the 2nd inning and solo shot in the 9th is one Hell of a way to bust out.

Jose Valverde: Uneventful saves are much appreciated. So Papa Grande gets a roar, but easy saves will not get you a shot at BYB PotG.

Ryan Rabrun: He doubled. YAY! Good job! We all need positive reinforcement, even the much derided Ray-bum.

Brennan Boesch: 0-3 with 3 strike outs. Remember when Boesch finally came alive and was hitting the cover off the ball? Bad Boesch is back.

Prince Fielder: The big men of the Tigers' batting order went hitless, but at least Cabrera walked once. So Prince gets the nod.

With 2 hits and the Tigers' only RBI, Brennan Boesch was rewarded as PotG with 77% of the BYB vote.